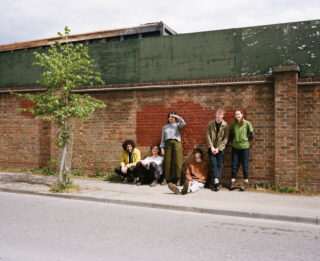 Songs in the Key of O opens with a lumbering beast of a track called ‘Machine’. Cascading new-age synths and a twangy bassline are pierced by the trill of a flute as For Breakfast’s lead vocalist Maya Harrison sings about a mechanised monster on its last legs. Its gears grind to a halt and oil sputters out of its mouth as the song eventually crashes into a wall of EDM distortion that bassist (and de-facto manager) Sam Birkett gleefully admits sounds horrific. “That song is a bit of a Frankenstein,” he explains over Zoom alongside the other members of the band. “It’s been through a lot of iterations over its lifetime.”

An amorphous creature from the beginning, iteration is fused into the DNA of For Breakfast. With numerous members leaving and joining over its history – including during the making of the EP – the North London sextet have had to constantly readjust and redefine who they are. Founding member Maya is used to this level of mess.

“It’s been a long and winding journey,” she says with a laugh when asked about the band’s origins. Sam and former guitarist Joe Thompson met Maya at university, where she would watch them jam to reggae drum loops they found on YouTube. “Neither of us could really play our instruments. It was noise rock, but accidentally noise rock,” Sam explains.

“It was horrible,” corrects Maya.

After she joined, the group went through a sequence of mutations that culminated in them uploading a couple of tracks to Soundcloud in 2017. The band’s flugelhorn player left and drummer Will Eckersley joined, followed by guitarist Omar Zaghouani and flautist Gail Tasker, and For Breakfast in its current form began to materialise.

Songs in the Key of O is the summation of their journey so far. Messy and bold, the EP is an unwieldy mishmash of genres and styles that revels in the absolute chaos of it all. Post-punk, dream pop, jazz, noise rock and gruff psychedelia are all crammed into its 20-minute runtime, and each of its four tracks wind up in wildly different places from where they began.

Dissonant musical influences are common when such a large group of people come together, but For Breakfast really do run the gamut: Sam is at home in post-punk, taking inspiration from Canadian quartet Preoccupations; lead vocalist and synth player Maya is a pophead; Omar’s background is in progressive and noise-rock; Gail loves jazz; Will previously played in instrumental metal bands; and newest member Eden Harrison, saxophonist and “bleeps and bloops” man, has an affinity for techno and ambient.

“We don’t actually recognise most of the artists each other listens to,” Gail admits. “If you asked us all which artists influenced us the most and the music we make, we would all say completely different things,” adds Eden. While most bands would settle on how their music should sound at the outset, or maybe let different members take control on different songs, every single decision For Breakfast make is done by committee. “Our unwritten rule is that we always try everyone’s suggestions,” says Will. “We never dismiss or scorn a theory. Everyone’s always contributing something to everything.”

With this “painfully democratic” approach to writing, it takes the group a long time to get anything done – but with every member’s voice heard, they’re usually all fully satisfied with the result. Songs in the Key of O sucks in all of their ideas like a vacuum and spits them out in new and exciting ways. ‘Bill Season’ ebbs and flows between periods of loud and relative quiet, where a bluesy flute and placid vocal melodies intermittently give way to machine-gun drum rhythms and screaming guitar, before reaching a rapturous crescendo. “Are you watching the fallout?” Maya sings joyously as the world collapses all around her. 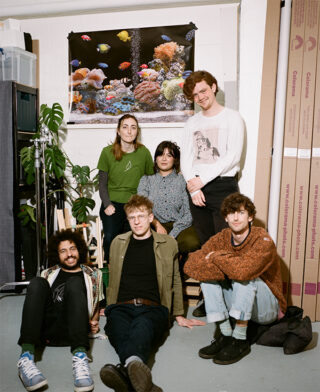 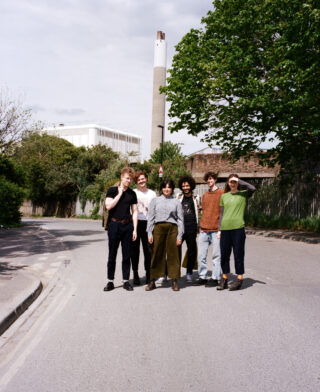 Written long before “social distance” and “self-isolation” became part of our everyday vocabulary, the climactic nature of the EP feels eerily prescient. Miles Davis composition ‘Nardis’ was first made famous with a dreamily melancholic rendition by Bill Evans; For Breakfast’s take on the jazz standard is a Lynchian nightmare. Stuttering guitar plucks and a languid sax hover in the mix as Maya soliloquises with the stony conviction of a cult leader. The squelch of footsteps in mud creeps into the midsection, tempting you to look over your shoulder as they inch closer. Gail stresses that the band didn’t intentionally set out to corrupt Evans’ mellow tune. But Omar cuts in: “If we were going to play it, it was going to get corrupted.”

Similarly, beneath a veneer of saccharine vocal and flute melodies, ‘Mother’ hides a post-apocalyptic lullaby. “Hide in darkness with me / Scratch my teeth and pull them out / Hide them from your mother,” Maya gleefully sings over a grotesquely sweet instrumental. She explains that the song is about keeping secrets from your parents: “It’s that cheery face you put on when maybe everything’s not actually fine.” Like ‘Machine’, it ends in a violent cacophony that eviscerates any lingering doubt that the song was in the slightest bit wholesome.

For Breakfast didn’t need a global pandemic to inspire the dramatic soundscapes for Songs in the Key of O. Anxiety, politics and the climate crisis provided more than enough fodder for their doomsday mood board. “I think we’re all fairly aware that the world is ending and everything is shit,” sighs Maya. “Yeah, it wasn’t like there wasn’t a lot of material to work with before we actually did have a global cataclysm. We are living in a time that, for one reason or another, feels very climactic,” adds Sam.

“I think that’s also just the classic feeling of being someone in their mid-20s,” she says. “Every day is like your own mini apocalypse.” The heightened emotions of this extended adolescence is reflected in the wild tonal shifts on Songs in the Key of O. “The EP is definitely very happy and then very not, an obvious dichotomy of emotions,” explains Eden. “You get dumb shit and funny shit happening right next to really traumatic stuff, and I think we’ve always enjoyed the contrast between those two modes in our music,” Sam elaborates.

When asked if the pandemic has changed the group’s outlook at all, Omar summarises: “Now, we just feel meh.” This coming-of-age cynicism has seeped into their upcoming second EP, which the band hope to have out by the end of the year. With Gail and Eden part of the process from the beginning this time around, the new release will mark the next transformation for the collective. Writing the songs around this new wind section, they say their new music is freakier and sexier than anything they’ve done before. As Will matter-of-factly puts it: “If Songs in the Key of O was sinister carnival music, the next EP is sinister porn music.”

How long this configuration of the band will last is anyone’s guess, but it doesn’t matter. For Breakfast is now a self-sustaining machine; one that can survive the comings and goings of a bunch of 20-somethings. Depending on who is part of the group at any given time, it adapts, morphs and evolves into something unrecognisable from what came before. “It’s quite ephemeral,” Sam muses. “But I think that’s what makes it fun.”