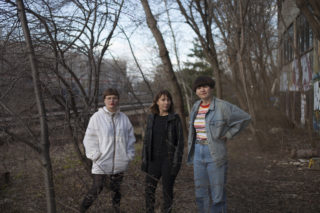 There's time to be adventurous in a rare, liveable city

A quick visit to one of the internet’s most invaluable resources gives you an idea of what you’re in for with Lungbutter. They take their name, apparently, from “that nasty greenish/yellow goo that smokers cough up in the morning.” Once you get past the initial revulsion, you realise there’s something quite endearing about euphemisms like that – they’re attempts to ameliorate something harsh. They’re rough, but they’re appealing.

There’s a reason, then, why it seemed an appropriate moniker. The Montreal trio are no strangers either to each other or, for that matter, to similarly striking band names; over a number of years spent in the thick of their hometown’s thriving experimental noise rock scene, they’ve spent time, between them, as members of such outfits as Femmaggots, Harsh Reality, Wreckage and Nag, among others. “There was this moment, a few years ago, where if you’d named any three people within our extended friendship group, they’d probably played a show together,” laughs vocalist Ky Brooks. “Everybody was in three or four bands at the same time.”


Collaboration, of course, doesn’t have to mean compromise, and Lungbutter’s debut full-length is proof positive: it is a relentlessly adventurous piece of work, thrilling in its ambition. It shifts shape constantly over the course of its eleven tracks, but the basic foundation is Kaity Zozula’s growling discordant guitar, too heavy to be grungy but too keenly aware of its capacity for melody to be metal. Brooks takes the same approach to their vocals, half sung, half shouted, somewhere in between sharp sloganeering and stream of consciousness. Behind it all, Joni Sadler provides gleefully off-kilter percussion, pummelling the drums in a manner that almost sounds like a response to the sonic chaos unfolding around her. The title Honey was chosen for its ambiguity, and sure enough any sweetness to Lungbutter’s sound is certainly not obvious in the traditional sense.

What it does possess, though, is a fierce confidence in its experimental nature, the product of a refreshingly fearless alternative arts world in Canada’s second-most populous city that has nurtured them and provided them with a platform. They were all drawn to the city for different reasons and found themselves pulled into its music scenes from different backgrounds. “I was in the classical world for a long time,” says Brooks. “Punk music had a strong appeal to me because there’s a lot of possibility to it – you can just do it. That’s a long way from where I came from, performing choral music, where it’s very rarified and super competitive and everybody you meet is like a musical athlete. I felt like the experimental scene had the same level of virtuosity, but without the competitive bullshit edge.”

Zozula’s motivations for entering into the anything-goes world of noise rock were similar. “The style of playing that produces straightforward rock music, or even punk to a certain extent, it all requires a certain level of technique that I never felt capable of,” says the guitarist, who reels off a list of avant-gardists like Bill Orcutt, Keiji Hano, Robert Fripp and Ted Falconi when talking about her influences. “That’s probably in part a gendered thing, and in part being exposed in the past to certain styles of guitar playing where everybody expects you to have intense technical knowledge and be a real gearhead before you can even think about playing in a band. I felt like experimental music provided a platform for me to really develop my own style and not feel constantly self-conscious about it. It’s really empowering.”

When they began working together in earnest, Lungbutter were all looking to continue in that same independent vein – they were all looking for something musically different to what they were used to. For Zozula, that meant teaching herself how to write towering riffs; for Brooks, meanwhile, it was an opportunity to push the boundaries as far as possible as a vocalist, “within a band dynamic – I was doing a lot of super weird, improvvy stuff that didn’t have enough structure to be satisfying all the time,” Ky says. It also meant embracing thematic diversity. “I wanted to write in ways that are abstract and non-linear. A lot of my previous projects had felt more contextual, as if every song had to be about this or be about that. I didn’t want to go there as a writer. I liked the idea of ambiguity.”

Accordingly, Brooks’ preoccupations run the gamut across Honey’s eleven songs from the environmental concerns that dominated their 2014 cassette EP Extractor through to stinging takedowns of modern society (‘Flat White’) and odes to similarly eccentric artists (‘Henry Darger’). You get the sense that this is as confident and free as Brooks has yet felt as a lyricist, partly because of the icily detached manner in which the words are delivered and partly because of the swings from one topic to the next without too much regard for cohesion or an overarching narrative – working that way, it seems, would dilute some of Honey’s intensity.

“It’s a complicated thing to talk about,” says Brooks, “There’s shared imagery and material between the different songs, but I think that’s more a product of what seems urgent in the world than any particular goal to have a message running through the record and to keep that on track. When we made Extractor, everything revolved around the same ideas – extractivism, and The Pipeline Project, and that was because we wanted to put those things out there. This time it was more fluid. It could have been as simple as me saying, ‘oh, here’s this weird thing I saw the other day.’ It’s all jammed in there together.” 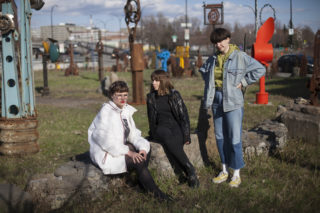 As much as anything else, Lungbutter are a product of their surroundings: it isn’t just the supportive and flexible nature of Montreal’s noise scene that helped foster an audacious streak in the band, but the experience of living in the city as a whole. They all ended up there for different practical purposes (Ky to study for a physics degree, for instance; Joni to take up a new day job) but it’s clear that the three never would have been able to gel so effectively in a creative sense if they’d formed Lungbutter more or less anywhere else.

“It’s a really liveable city in a way that is rare nowadays,” Zozula explains. “In terms of the rent being extremely cheap compared to a lot of other places in North America, but also the way that translates into the music scene. If you don’t have to work around the clock just to make rent, then you have time to pursue creative projects without the specific intent of professionalising it, which then means more places to play, and more shows being organised. In other cities, there’s a pressure to have some kind of return on it, for it to generate an income. That doesn’t exist in the same way here.”


Sadler agrees. “There’s a track record of the city being supportive of art from outside of the mainstream,” she says. “When I first moved here, it struck me that there was an interesting show happening every night of the week. There’s an enthusiasm for the new that makes Montreal really special. People are willing to take a chance and spend ten dollars on a weird show with three experimental artists they know nothing about.”

That kind of backing is something that’s grounded the trio, and the slow burn from that first EP five years ago to their debut album now means that they’re level-headed about where to take Lungbutter next. They’ll play sporadically across Canada this year and hope to venture further afield in 2020, but the main priority seems to be to strike while the iron is hot and continue on their current writing streak. “We want to strike a balance between band commitments and everything else we have going on – work, academic stuff, real life,” says Zozula. “It’s important that everything we do with Lungbutter feels sustainable. We want to structure everything in a way that feels as good as possible; we worked hard to get to this point, so now we want to enjoy it.”