As the Dublin singer, songwriter and producer releases her new EP, she tells L&Q about regeneration, resilience, and demonisation.

“Lockdown was pretty intense here – we couldn’t leave the house for weeks.”

Gemma Dunleavy is telling me about the past few months from her home in Dublin. As it has been for so many people, 2020 has been a challenging year so far for the Irish artist, but she’s kept herself busy.

“I was working on the record during lockdown so I had something to throw myself into,” she recalls. “But at the beginning I found it quite hard – you suddenly have this vast array of space and time. You think that’s all you want when you don’t have time to work on creative projects, but when you get to it and you realise your body’s so used to things being a certain way… you kind of forget how to do everything.”

She wasn’t supposed to make a record this year. For several months now, her life has been consumed by a personal campaign to stop the destructive redevelopment of the area around Dublin’s Sheriff Street, a working-class district to the north of the city centre. The tight-knit community there – where she grew up – has already been impinged upon heavily by the so-called regeneration of this part of the Irish capital, since the new International Financial Services District began to be constructed nearby in the late 1980s. As ever-larger swathes of previously residential land were consumed by the new development, local government sought to reassure local people that they would eventually benefit from this rupture on their doorstep.

“The flats were getting knocked down, but we were promised everything: jobs, schools, social housing, and none of it happened,” says Dunleavy. “Just buildings growing up like weeds around us. We made this area special, when we had nothing else from the government or authorities, nothing, all we had was each other. During the ‘90s it was really badly affected by the heroin epidemic, and people just demonised the area and labelled it this horrible place. They didn’t think ‘we’ve done this to this community, let’s do something to help’. The big TV companies came down in cars – there weren’t a lot of cars around the area at the time – and these people were coming in filming it out of the window like it was a safari park. They wouldn’t even get out of the car.”

As soon as she saw that a similar process of gentrification and displacement had started up again in the same area, more or less unnoticed, she felt compelled to act.

“I was like ‘no, they’re not doing this again’. So I wanted to draw a bit of attention to it.” She began working on a documentary about the area and the social pressures that have been driving its repeated upheaval. “The government and developers take advantage of areas like this cos they know that people have real problems on their doorstep and don’t have time to look at planning permission notices – they just hear the roadworks. I’m privileged not to have a load of kids or other stuff to deal with; I can be an artist and where I’m from that’s a privilege. I had the time to look into all this stuff – and I was just in shock.”

Over the weeks and months preceding the coronavirus pandemic, Dunleavy kept working on the documentary, deciding to set music aside for a while to focus on the issue at hand. “I was eating, sleeping, breathing this fight, contacting every TD [Teachta Dála, the Irish equivalent to an MP or member of congress], every politician, getting nowhere, and working on music just felt fickle in that context.” Yet as the production of the documentary continued, she found herself, almost accidentally, writing songs about the community at its heart.

“I can’t even remember how it started, but I think I was just sitting in my room one day playing the piano and one of the songs was born,” she says. “And then Dr Martens got in touch, and I thought I’m gonna take this opportunity and make a record about this place.” The legendary footwear brand’s attention was piqued by Dunleavy and her approach to representing the resilience and solidarity that characterises her native community, and decided to help her make her new E.P., Up D Flats, providing studio time, PR, and live bookings as part of their Dr Martens Presents project which offers support to independent artists and helps back their creative projects which otherwise might not be possible.

“They left me to my own devices – I wouldn’t have been able to do this project if I had a brand getting their fingers in telling me what to do,” says Dunleavy, her tone forthright. That independent spirit is audible on the finished record: Up D Flats is a rich, intricate piece of work, in which the voices of the people she grew up with around Sheriff Street are placed front and centre, understated electronic instrumentals expertly framing their narratives.

“It’s a love letter to the community that raised me,” she says, fondly. “Each song is from the perspective of a stereotype that I grew up around, someone I was, someone I have been, someone I probably am, someone I grew up around, someone I’ve witnessed, in all their pain and glory. I wanted to show all sides… our community’s full of old souls, who aren’t just born like that, they experience things growing up that the average kid wouldn’t. But that’s what makes the community and its togetherness even more wholesome.” 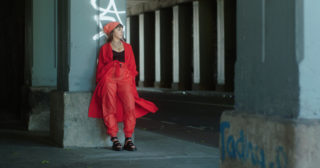 The sonics of this record are deep and wide-ranging: hints of UK garage in this beat, shades of soulful hip-hop in that groove, a timeless sense of melody binding everything together. As accomplished as everything is on Up D Flats, it also feels organic and homemade, with each detail present because it needs to be. This is in part due to the turbulent circumstances of its creation.

“My engineer is in London, and we normally mix and master together – it was really tough doing it from a distance,” says Dunleavy. “Then he got Covid-19 and was off ill for a few weeks. But we got through it and I listen back to the record and I can hear that it wasn’t made in the studio. We had a week in the studio and the rest of it was made with a broken mic a home.” Mobile phone recordings and interview audio were also blended into the mix, making the EP feel location-specific – although not in an alienating way. “I would hope that if you’re not from my area you can relate to it, but you can hear the kids with their accents, the tramlines, the seagulls, it feels like home.”

When the EP release campaign was being planned earlier this year, Dunleavy naturally expected to launch it with a string of live shows, which have had to be postponed.

“We had to decide to do it on a live-stream, and that was meant to be a few weeks ago, but then with everything that happened with Black Lives Matter I thought I need to park this for now – there’s more important stuff to for people listen to,” she says. Having postponed accordingly, the launch stream is now set for 16th July at 7pm; she’ll be performing her EP live on Instagram (@drmartensofficial).

“It’s been bounced around a lot, but I never thought I’d do it on live-stream,” she says, a little nervously. “But we’re all in the same boat. It’ll be grand.”

Up D Flats by Gemma Dunleavy is out today – for more information about Dr Martens Presents visit their site.