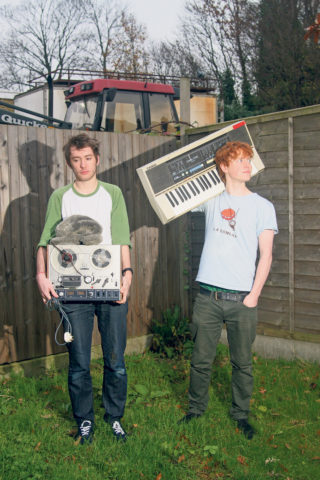 When Nu-Rave prematurely snuffed it last year one genre was particularly noted at the wake. Lurking by the sausage rolls, ‘Pop’ was every bit the perfect funeral guest. There was a ‘pleasant young man’ in the well-groomed Esser, melodies for mourners in Ladyhawke, a mope-quashing party-starter in Santogold. In no time, it was like nothing had been lost. But that’s sneaky Pop for you – forever waiting in the wings with its ‘default setting’ uniform on, ready for action as soon as a hyped alt. genre turns sour. But in these Klaxons-less times there’s also been a rising number of bands producing similarly original music. Bands like Banjo Or Freakout, High Places, Ponytail and Fuck Buttons. And now, with London noise duo Gentle Friendly fresh from releasing a new EP – and with an album on its way – all that’s needed is a media-friendly name for this ‘movement’, and just maybe Pop will have to hop out of the limelight once more.

“Actually, in reality, when people I know ask me what my band is like I tell them, ‘it’s noisy, with keyboards, you wouldn’t like it’.”

Maybe we should come back to the name. For now, let’s concentrate on the facts.

Gentle Friendly started when David dragged some beaten up drums and guitars from a skip outside of his east London flat. Having rubbed off the stains from discarded glo-sticks he invited Daniel to “come and mess with the stuff”. In no time, the pair were creating loopy, experimental music, somewhere between the hardcore punk of No Age and the possessed, digital shoegaze of Fuck Buttons.

With Daniel assaulting his once abandoned drum kit, and David both chanting delicately and yelping along to his broken Casio MT-40, the band’s support slots to Health, and later Ponytail, came as little surprise. In Daniel’s words, “awesome powers” are to be expected from such live shows.

Wires and jack leads snake across the stage of Gentle Friendly gigs like black ivy, or spaghetti vomit. They enter an effect pedal here and exit a sampling box there, wrapped around an aiding iPod or two. Daniel crashes with vengeance and David, resting his instrument on an old suitcase, punches keys and lets rip into two microphones. Track like the fractured ‘XXXmas’ appear even more demonic and original than on record while ‘Five Girl Night’ is at its fuzziest and most joyous. All of this setting off loops and halting whirrs that fly from knackered amps does see like it’s a task easily avoided though. A couple more pairs of hands wouldn’t go amiss, no?

“Sometimes it gets lonely up on stage,” concurs David “but we have often had friends and musicians helping us out. Memorable jams include G/F vs. Ponytail, where the ceiling almost caved in from dancers, and G/F vs. Banjo Or Freakout vs. American Spirit, which none of us can really remember. That night ended with 2 of said bands in a shower.”

Daniel also gets his fair share of helping hands when bashing about in side project Buttonhead; an Animal Collective-toting five piece, very much part of the ‘dink rock’/‘blah-core’ uprising.

“I think of both projects as ancient symbols that relate to wholeness,” says Daniel, perhaps with tongue embedded in cheek, perhaps not. “They combine the imagery of the circle and the spiral into a meandering but purposeful path. They each represent a journey to our own centre and back again out into the world.” 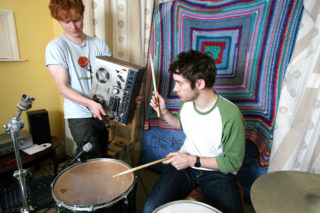 Riiiight. Lost yet? Well don’t be. Remember, this is the alternative to pop jumping back into bed with us and stealing all the covers for the next 12 months. Gentle Friendly were never going to be simple, which is why this duo aren’t inspired simply by other musicians and records (although, for your information, David has recently been into the new, freaky Nite Jewel album, Baby Venom and T.I.’s latest, even if “it’s no ‘King’”, while Daniel’s listening post currently features “a lot of Detroit House, Mahjongg, Bird Names and EPMD”). Instead the pair are motivated by a little-known life choice.

“In all seriousness we take inspiration at the moment from a man named Wiley Brooks, founder of the Breatharian Institute of America and pioneer of breathanism,” begins David. “It’s an ethos where you eat nothing and soak up nutrients from the air. Wiley in fact does eat but is working towards a state where food is unnecessary to achieve humanity’s true dimension. Daniel used to be vegan but he is now breatharian.”

“There is much occurring in the world of negativity and of desperation at this time,” continues Daniel as he speaks of his hopes for the New Year. “It’s a necessity for those of The Light to put thought into rising above those things. Most definitely stay neutral and remain balanced!”

Okay, where’s Beadle (or Ant & Dec as seems to be these days)? Except Gentle Friendly aren’t joking, unless they’re talking about Kurt Cobain still being alive, that is – “Kurt ain’t dead,” they protest. “It was Novoselic, man, why do you think he went to Croatia!?”.

No, Gentle Friendly are two young men as complex as they’d need to be to create their recent cassette EP, released via south London know-it-alls No Pain In Pop. And from the bonkers ‘Sky Burial’, which would be end-of-level-boss disco if not for its poignant thoughts (“Raising the dead never works,” warns David’s vocals) to the dynamic ‘Ride Symbols’ (a well-planned mess of feedback hums and gritty fuzzes), ‘Night Tapes EP’ made us want more. Luckily, as Daniel says, this duo are obligated to rise above negativity, so more we shall have.

“We’re planning on releasing new stuff as a ten inch, which will be coming out in spring next year on Upset The Rhythm,” explains David from the band’s Lewisham studio. “Its going very well, we’ve been recording all week and have about 5 songs done so far, but we always have loads of songs lying around so that could all change. We’ve been working on some of these for months, and some of them we made up on the spot. We’re really excited about this stuff anyway. There’s no title yet but it’s a record about extreme weather, love and cars.”

Plainly, Gentle Friendly won’t be able to see Little Boots, La Roux and Frankmusik for dust in the race to the top this year. It’d be foolish to think otherwise. Ones To Watch lists are rammed with popsters for a reason; because they’re the safe bets, and no critic wishes to look like a fool come December. But when 2009 gets a little too ‘Smash Hits’ (and don’t you dare play the faux ‘I loved that mag’ card) remember that some bands have been too busy creating structurally and sonically original music to go grave-robbing with gobs full of wake nibbles.