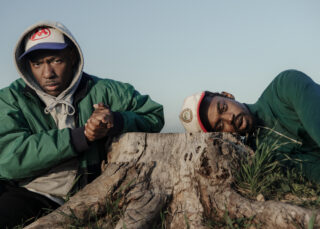 "We fucking fucked the game up for a second”

In February, a track named ‘HEAVY METAL’ dropped with little to no warning, setting off a flurry of internet chatter: who are Paris Texas and why has no-one told us about them? The scramble to get to the bottom of the mystery was on. Clearly, they were a duo possessed of a creative wizardry and rule-free independence that is hard to come by and, based on this track, had an attitude to making underground hip-hop that is as comfortable drawing from the outer limits of experimental rock as it is from anywhere else.

The reaction to ‘HEAVY METAL’ took even them by surprise. “It was way more [than we expected],” producer and rapper Louie Pastel says. “But I get it. It’s just so new and it’s been so dry for so long. We wanted to just hit them over the head with something, we’re ready. We fucking fucked the game up for a second.”

“Just a little bit,” chimes in Felix, the other voice of Paris Texas, from the other side of the living room in the Los Angeles apartment they share. “This isn’t the last of what’s happening, this isn’t the only thing that we’re capable of. People get excited just off this one song, and it’s like, yeah that was fun, we like it, but alright we’re ready to go to the next thing. There are bigger fish to fry.”

The next thing in question is their debut mixtape, Boy Anonymous, where weirdly paced verses and samples of ambient sound mesh with eerie, desolate guitar lines, cloudy atmospherics and clattering percussive beats. It could be tempting to invoke names like JPEGMAFIA, Clipping or Shabazz Palaces when discussing their sound, but any attempt to define them by what has gone before is misguided from the outset.

Louie and Felix met in high school in 2013 – two musical obsessives on different paths: Felix, a South Central kid, was an underground hip-hop head while Compton native Louie, after a brief Eiffel 65 phase, was hooked on Alternative Press and outsider guitar music. They bonded early on over the Florida cloud rapper Robb Banks and within the year they were already making music together.

“We just had really good chemistry, it was crazy,” says Louie. “We were just putting each other onto different shit. He’d find something and I’d become obsessed with it and I’d find something and he became obsessed with it. Anytime we’d meet someone else, we’d just laugh because it was like, ‘oh, they don’t get it, they don’t understand.’ We were aligned.”

Although the idea of their breakthrough single dropping out of the clear night sky fully-formed is enticing, it is, of course, also impossible. There are remnants of their earlier musical experiments out there in the ether, they insist, including three different projects involving Felix that are all under variants of the same name (“they’ll find it, it won’t take long,” he quips), and while they were all doubtless necessary steps on the road that led to Paris Texas, they both concede that they were little more than incomplete ideas by young minds that were yet to find a clear direction.

“The sound is more focused than it was before,” says Felix. “Over a certain time we got comfortable with recording. Now, we’re more invested.”

They also point to the development of their own musical tastes as being a factor in the progression of their writing. “Right now there are so many tight artists and we are one of them,” says Louie. “But Yves Tumor for sure, I’m so fucking mind-blown by him.”

Felix’s face lights up. “Oh yeah, Yves! People that make you put your hand on your chin and say, ‘What is happening?!’ It’s never discouraging, it’s just like, ‘Huh, ok, this is humbling.’” 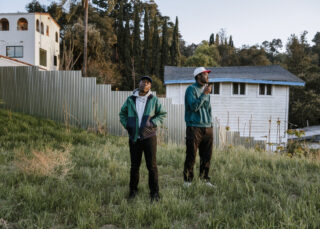 Throughout our interview, they chop in and out of each other’s sentences, throwing in inside jokes and completing thoughts that the other has started. It is easy to see how collaborating came naturally to them, although they claim that their creative process is “very chaotic”. They paint a picture of Louie sat at his laptop creating beats while Felix is sat ten feet away playing video games, waiting for the chance to let rip on the finished product. “Whatever he’s making, I’ll be willing to try everything, because we have the same idea of where we want to go with this,” says Felix. “The stuff that I try is different enough to not be categorised or predictable, so I’ll usually just try anything and get wild.”

“Luckily, I’m blessed, because I’m not really that good of a producer, honestly,” replies Louie. When challenged on such a preposterous statement, he offers a measure of clarity. “I’m more of a composer, because I also write the song. There’s a lot of trial and error. Early on, when we tried to work with other producers, it was hard because everybody’s already used to making a certain type of song. It was like, ‘Do you sound like Mac DeMarco? Is this like a trap beat? Is it a Drake song? Is it a King Krule song?’ And if it was, it’d be like, ‘Oh, we can make this in a second’, but they were like, ‘Well, this is just like a jumbled mess, we don’t know what to do’ and I’m like ‘Ok, well I don’t know what to tell you, because this is what we’re doing’.”

It is precisely that joyously cavalier attitude that leaps out of every track on Boy Anonymous; the sort of original statement that needs hungry and curious new minds to bring it to life. The same expression can be found on the ‘HEAVY METAL’ video, the concept of which – the duo is abducted in violent, bloody fashion by masked marauders – came from Louie’s mind and was brought to life by director Illimiteworld.

“Visuals are probably the most important part,” says Louie. “It’s not always storytelling, it’s the aesthetic. Like, go watch a movie if you want a story that badly. It sucks that a lot of time, especially with rap, instead of being creative with their videos, they do the simple thing and they use a woman’s body or money and it’s very flashy, but it’s a copout. If you get a girl with a fat ass then everyone will watch, but am I watching because the artist is really blowing my mind? The artists that I’ve been a fan of over the years, they’ve done more than that.”

It should come as no surprise that an artist that goes by the name Paris Texas would have a keen visual eye, although Felix sheepishly admits that he’s never actually watched the masterful 1984 Wim Wenders existential road movie of the same name. Louie is the film buff of the two, but even for him, the name is designed to invoke the mystery and intrigue of a disembodied movie poster rather than the specifics of the film itself, to the extent that he originally wanted to go further and call the project Paris Texas (1984), before concluding that that was “dumb”.

Paris Texas it is then, and it’s a name to get used to. They are resisting the urge to rush release the rest of their recorded material in the wake of the hype for ‘HEAVY METAL’, but they are already onto putting together the next set of tracks, the wind firmly in their sails. “Keep watching, it’s gonna get wild,” Felix says as we conclude our talk. I thought it already was.