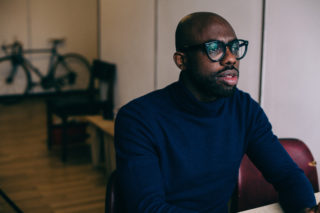 When Obaro Ejimiwe knocks on our office door at 10am, he’s half the man he was. Literally. He wasn’t a real chubber when we last met at the end of 2011, but now he’s positively sleek beneath a black brolly and dressed in Reiss. His synonymous tweed porkpie hat has gone, perhaps forever, and he’s traded button ups for roll-necks – the final frontier in a slender fellow’s wardrobe. Ghostpoet looks as in shape as his twitter feed has lead us to believe – a stream largely reserved for seeking out running partners. Ejimiwe likes to run. It’s become an addiction. He often shouts out to the Run Dem Crew, a Nike-affiliated society of jogging nurses, teachers and other civvies that don’t want to lace-up alone.

“I just got tired of drinking a lot every day,” he says. “Run Dem Crew inspired me to keep running and inspired the new record to an extent. I love soaking up life and it was a snapshot of life, every Tuesday with the crew, seeing people from all walks of life.”

In 2011, Ejimiwe and I made chitchat about our backpacks as he calculated whether he could fit his laptop into a bag as small as mine. Today, inside and out of the tired English downpour, he plays with his new iPad mini between photographs and tucks it into his inside pocket – more slimming down.

Aside from these physicalities, Obaro Ejimiwe hasn’t changed much at all. He is still a straight-talker and a realist; still a calming influence; still a softly spoken anti-rapper in suede shoes; still a man of simple means; still a guy who’s happy to stay a little longer. When our interview officially ends we continue to talk for the same amount of time again, covering the evils of Apple, the real value of a Facebook Like, how other bands are in interviews, Spritualized, Kanye West, Keaton Henson’s refusal to converse with the music industry and tattoos (another addiction that Ejimiwe is due to feed this afternoon).

‘Some Say I So I Say Light’ is Ghostpoet’s second album, due for release 6 May 2013. The title, he says, came to him in a dream, “which is really cliché, but it did.” He also likes the way it looks written down: a phrase that appears to rewrite itself until it doesn’t. “It was almost like an input/output thing,” he says, “where it goes in one way and comes out different. But also I like the idea of things or people going in one direction and me going in another. So the idea of where people are saying a particular thing, like ‘I’, I’m saying ‘light’. I want to be doing my own thing, y’know, not following a trend or style. That’s the thinking behind it.”

‘MSI Musmid’ – the first track to come from ‘Some Say I…’ – has a dream origin story, too. Proper recesses of the mind stuff, abstract and impossible to decode. Ghostpoet has tried, but there’s little making sense of a punch up between dim sum and noodles. Ejimiwe half winces when talking about it. Dreams seem so hoky.

“Previously I’ve been shying away from using dreams in music,” he says, “because, I dunno, it’s kind of that thing – ‘I had a dream and wrote this song about it,’” he says in a dopy voice. “I’ll always be sceptical about things like that. But dream or reality, it is mine, and my music is about conscious thought but also subconscious thought, so I thought, yeah, let’s see what comes out of this.”

‘Peanut Butter Blues and Melancholy Jam’ – Ghostpoet’s debut album of 2011, released via Gilles Peterson’s Brownswood Recordings – received no small amount of acclaim, most notably a nod from the Mercury Music Prize. It’s a record with enduring charm, and one that sounds better today than it ever did. Stylistically, ‘Some Say I So I Say Light’ picks up where it left off, complete with mumbled verses, skittish percussion and glum piano chords. Recorded with Richard Formby rather than in complete bedroom isolation as before, the production value has clearly increased, although not to the extent that Ejimiwe thinks, who now says “production wise, I was shit on the first record”. It’s melancholy that most traverses the records, though, and there’s even less of a respite from it now. 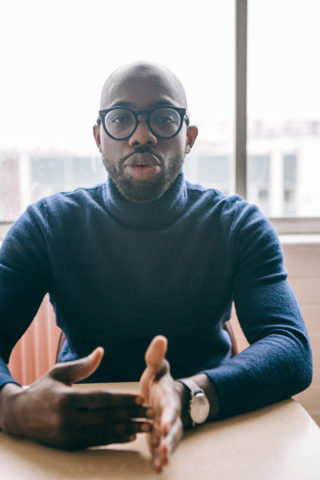 ‘Peanut Butter Blues…’ was downtrodden by opportunity and cash rather than matters of the heart. Tracks like ‘Us Against Whatever’ came with a message of ‘All you need is love’, in fact, while ‘Finished I Ain’t’ professed that “life’s too short just to give up now”. ‘Some Say I…’ is less upbeat, less optimistic and more heartbroken. It frequently feels like a breakup record.

“To an extent it is,” Ejimiwe says, “and it’s something that I don’t want to talk about, because it’s one of those things. But I went through some personal changes. Moving to Dalston [east London, from south of the city where Ghostpoet grew up and wrote his first record] was one of the results of my personal changes. Although I’ve been to east London a lot in the past, moving here was a new world to me, and when I moved here the room I moved into came with an upright piano, which was just there. At the time I didn’t know it wasn’t in tune, I just thought I could use it, so I just started making demos of stuff, and the whole of the album started from that piano. I don’t know what it is about that instrument but I seem to float towards the sadder notes and melancholic chords. Some of it was much sadder and I’ve scaled it back a bit, while other tracks stay true to the demos and how life was at that time.”

“I don’t want to go down that road / It’s causing me too much pain”, goes ‘Them Waters’, a gloomy, whip-cracking trance number at half speed, followed by unchallengeable highlight ‘Dial Tones’, which features a love-stung guest vocal from Lucy Rose and talk of olive branches and unreturned phone calls. References to running out of patience in a relationship are a recurring theme, too, not that Ghostpoet is wallowing here – it very much feels like the dumping was on his terms.

Fela Kuti and pirate radio gave a young Ejimiwe his entrance points to music, before he made some songs of his own and decided to recite them to a small group of friends at college. 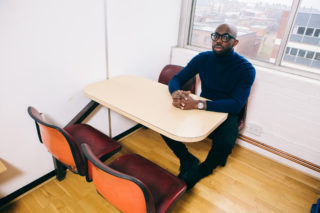 “I had this radio and used a coat hanger to get the reception,” he says. “Kids nowadays won’t understand this, but I remember trying to find stations and the ones that interested me were the ones that had a bit of crackle in them. I didn’t know what pirate stations where then, but I knew it was interesting, and I’ve never liked anything that’s clean when it comes to music – it’s always got to be a little bit grotty.”

Grot is something that Ghostpoet took with him to Richard Formby’s studio, and his new album feels slightly out of focus beneath a crackling layer of static. But pirate radio is largely home to UK grime and garage, and while the polymath of Ghostpoet paints in colours as varied as ambient electro, two-step, soul, R&B and strange metallic samples, he doesn’t touch hip-hop or consider himself an MC of any kind. It’s a term most frequently pinned on him, no doubt related to his skin colour, but also, I reason, due to his vocal delivery. Ghostpoet doesn’t rap, per se, not in the usual speedy grime vein, nor like an American patting the air and playing the gangsta, but he hardly sings either. He lethargically rolls out his prose in a deep, mellow tone. It’s not hip-hop, but it’s forgivable to consider him a rapper, isn’t it?

Ghostpoet doesn’t court glamour like a rapper either. “Having a packet of crisps on the rider, I find that glamorous,” he says, echoing the sentiment of his breakthrough single ‘Survive It’ (“No no no no n-n-no, ain’t got a licence to kill like a double 0 / I just wanna live life and survive it”).

“I’m a simple guy,” he says. “I just like making music. If you like it, you like it, if you don’t, don’t. You can’t like everything. I’m not a salesman. I can’t do the hard sell. All I know is that I’ve made a record I wanted to make. I hope people like it and pass it on to their friends.” 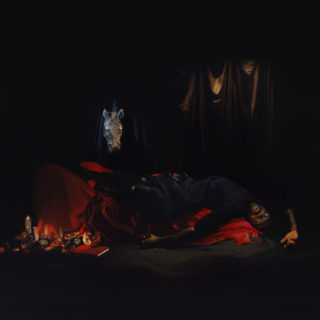