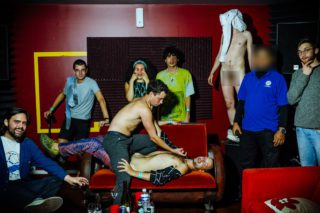 A driver stands totally naked with a shirt on his head and trousers around his ankles, two brothers wrestle on a plush red velvet sofa with one strangling the other, a bemused venue steward stands beside them looking dead at the camera, whilst others around them present a variety of looks amongst discarded wine glasses. “Yeah, that is a problematic photo,” says Golden Teacher’s Sam Bellacosa of a particularly drunken evening at the end of a tour in the Champagne region of France. “Maybe it’s a little too tongue in cheek.”

Aside from looking like some sort of LSD-induced nativity scene gone wrong, this backstage photo in circulation of the group somehow feels emblematic of the group as a whole: busy, chaotic, fun, animated and intriguing. Golden Teacher have been making some of the most heady, immersive and eclectic dance music to come out of Scotland in recent years. They are a six-piece group that dance around genres seamlessly, hurling out ESG-like disco-tinged grooves one minute, agitated no wave the next. Then there’re nods to industrial or house music, winks to dub and dancehall, always under the full embrace of jilted rhythms and complete experimentation.

Having released a series of 12”s and EPs on labels such as Optimo over the years, the group finally just released their debut LP, ‘No Luscious Life’, one of 2017’s true underground gems. Catching up with Bellacosa in Glasgow, the group haven’t even had time to let the release of the album sink in because they have been split between other projects and stretched out across different continents. They also consists of brothers Laurie and Oliver Pitt, Cassie Oji, Charles Lavenac and Richard McMaster, who between them all are in enough different bands and projects to fill their own festival line-up. Such projects include L.A.P.S, Silk Cut and Blue Sabbath Black Fiji. “In an ideal world we’d be touring this record right now,” Bellacosa says, “but we’d have to work an enormous amount to get into the tight grooves of that record – to get back into the collective frenzy of that moment.”

The collective frenzy that makes up the record, and indeed the band, is one that comes from funnelling a huge amount into it. The group are voracious consumers of music and this is very much a head band. “We’re into music in various ways,” Bellacosa tells me. “Be it collectorship, scholarship or creating and authorship – in all senses we’re obsessed with music. It’s about music for posterity, getting as much out there as possible.”

What gives the group this sense of idiosyncrasy is the smashing together of ideas, and of styles and of amorphous roles. “I was drawn to how zealous everybody is with what they do,” Bellacosa says of the group’s ability to move around. “A lot of what the band was about was each member really trying to formalise what their role was rather than what their instrument was. It was less what do you play in the band and more about what am I as a musician, and I think for the six of us it was about having the belief in being able to call yourself a musician and not necessarily be an instrumentalist in any way. That’s a very punk approach, I guess, but that term has become a little Xeroxed now. The whole thing is about a wolfish abandon. Like a pack of wild animals loaded with abandon and improvisation. I’ve now come to know these guys as not just people but unique geniuses and I say that as someone who has a bit of a bugbear about the term unique.” 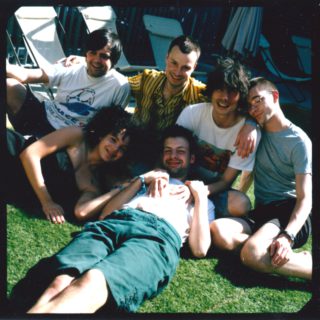 Throwing six unique people into the mix and melding genres, paces and switching tone from record-to-record could, and perhaps should be, a hot mess. However, over the last five years Golden Teacher’s career almost mirrors one of a truly mesmerising DJ set, as they continue to unfold in this rolling, overlapping way that manages to all feel part of the same sonic voyage but covers masses of terrain whilst on it. “Golden Teacher is a therapeutic way to filter this obsession,” Bellacosa offers. “It’s an obsession through a compulsion.”

On a practical level, how do you get six people to land in the same place and want to make the same music, though? “It’s tough,” admits Bellacosa of the literal process of getting the band all in the same room to begin with. “Initially it was getting together at people’s houses to make music and then whatever would get put on the hi-fi over dinner might be enough to form a new idea, a certain rhythm or something. There’s a certain mystery to how music comes about but sometimes it can often be as circumstantial as that.”

What begins with the screeching noise of various ideas and inputs is then simmered down to the group’s essence – a groove. “I think the more we’ve played together, we’ve found a certain amount of restraint between us in the instrumentation and performance, and this new record is the essence of that. That’s the spirit of it, when we can get really reductive and listen to each other. It’s about taking all the ideas thrown together and just harmonising those.”

A great deal of such harmonising has been done at Glasgow’s Green Door studios over the years. It’s an analogue recording studio that also runs a free training programme for young people not in education or employment – something that all six members of the group have been through themselves, offering a meaningful and explorative platform for them to develop. “When we were leaving school everybody knew about it because it was a place you could spend time if you were unemployed or hadn’t been to uni or had finished with virtually no prospects,” Bellacosa says of the small back alley studio. “We needed outlets to make that music; it became a real legitimisation that somebody would record your music and give you that space and platform. Coming from that background means you’re prone to be open to progressive ways of doing things.” Members of the band are still involved with the studio now and are now passing on their own expertise to young people on the courses. A cassette tape release of covers recorded at the studio from 2009-2017 by various people who have been through the course was released earlier this year, seeing some delightfully warped and imaginative takes on music by the likes of Butthole Surfers, The Cramps, Devo and The Stooges.

In Golden Teacher’s early days they were a self-proclaimed party band, exploring hedonism in its purest form through the reckless abandon of music and inviting audiences to throw themselves into the sonic maelstrom that is the band live. They even have a song called ‘Party People’, an irresistible seven-minute funk strut through Afrobeat-flavoured percussive flurries, bouncing electronics and the animalistic growl of dual vocals.

A few years down the line, and with the group somewhat dissipated into various other projects and commitments, this approach has altered somewhat. “Being a party band is hard work,” Bellacosa tells me. “Some of the music on this record, I would suggest that maybe you can hear a slight weariness in the music. Now we’re in a very different set of circumstances to what we once were.  You can think about this album as a nice companion to the earlier stuff. Maybe it’s the comedown record. On record we can be headphone music – I’ve always viewed the two as being very different.”

Ultimately, being a party band means a fundamental commitment to something that becomes unsustainable unless it’s your full-time job. “We practised being a party band, we specifically asked for night club spots and partying festivals,” Bellacosa says. “That takes it toll on you, as it means putting in those really insane hours. In a gig environment it is swirling with 24 hour party people – it can be a little overwhelming sometimes.”

The term ‘partying’, here, is often applied in the most innocent sense too. “I don’t really think the band ever really saw intoxicants as a means to make that sort of music,” Bellacosa says when asked if the group got stuck heavy into drugs and booze and needed to take a step back. “If anything we had to get prohibitive with ourselves to reach that place. Drugs and alcohol never led the music – it’s not a drug band. Even someone like Spacemen 3 would probably balk at them just being known as a drug band. I’m sure there are some teetotallers tripping out to Spacemen 3 right now.”

Bellacosa goes on to describe the sound of the band’s current incarnation as “A Scanner Darkly party music,” referring to Philip K. Dick’s bleak novel. “We make disenchanted dance music,” he says. “Regardless of the party, dance music is something we’re always going to be invested in.”

It’s ultimately this continued immersion into dance music that still creates both the push and pull for the group. It’s a sense of shared catharsis that sparks and ignites both ways. As Bellacosa says: “Whether we’d admit it to ourselves, either as a group or individually, the way we’ve made it through a lot of stuff in life is through making dance music and engaging in raucous performances. It’s us exercising our own dramas.”