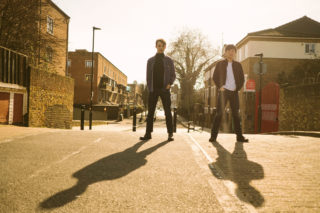 Shedding light on some myths around restrictions and censorship

Tom Ng glances at his bandmate, Joshua Frank, before both look down at their glasses with a slight shrug of resignation. “I guess you’ve answered this question a lot,” Ng sighs after a couple of seconds, “it’s my turn to answer this time.”

I’d just asked the pair about how they met in Beijing, which, I freely admit is the kind of question Gong Gong Gong must be sick of answering by now. The band has been running a two-guy lo-fi scene out of the Chinese capital for almost five years now, but the fact that they’re an experimental band operating from what’s considered to be one of the world’s most controlled societies is the thing most interviewers seem to hone in on first. So, yeah, it’s an obvious place to begin an interview, but, hey, it’s as good a place as any.

“I moved to Beijing, like, maybe ten years ago to start playing music,” says Ng, launching into the duo’s backstory. “I was getting a bit frustrated in Hong Kong; it’s like the only thing people were interested in was all this commercial shit, so really I moved to Beijing to do something different. I’d say that Beijing actually has a lot more creative freedom than Hong Kong.”

“I think that’s one thing that people don’t realise when they imagine what making music or art in China is like,” adds Frank. “We played a show yesterday and someone came up to us and asked, ‘so tell me, what’s it like making music under a totalitarian regime?’ I was, like, ‘man, you know nothing about China.’ People tend to think about all these restrictions and censorship, and while those things are an element, there is also the same kind of creative freedom that you get from any big, cosmopolitan city. What we’re doing, and what a lot of Chinese bands have no potential of doing, is making any money. It’s just not considered to be something anyone could profit off, so there’s a certain amount of freedom there.”

Clearly, if anyone knows about the reality of making music in Beijing, it’s Ng and Joshua. A Hong Konger and a Canadian, respectively, both have been making music in the city for a little over ten years, and not only as Gong Gong Gong. Along with Frank’s brother, the pair founded analogue label Rose Mansion Analog, and play in numerous other projects including Hot & Cold, the Offset: Spectacles and Love Research Institute. In the five or so years they’ve been in a band together, they’ve performed in underpass tunnels, subterranean art spaces and have generally been promoting noise music to any place in China that would book them.

Even so, if you’re looking for ambassadors for their Beijing scene, then Gong Gong Gong aren’t the guys for the job. “There was some pretty interesting music happening in Beijing from, say, 2009 to 2011, but it feels like a lot of the bands aren’t really relevant these days,” Frank tells me as we delve into the city’s noise circuit. “There is a Chinese indie scene, but it exists in a way that is very different from the West; it doesn’t really develop very fast and the group of people involved has tended to remain pretty constant. It seems like a lot of the bands we came up with have gotten stuck doing the same thing, which is not really all that interesting.”

“It’s also doesn’t help that a lot of the venues are shut now,” says Ng. “It’s not because of censorship per se, but because it’s hard for a venue to sustain itself. It’s still quite traditional in China, so when you get older a lot of people are called back by their parents to get married, have kids and work in some government job. It feels like there’s an attitude that by the time you’ve hit 30 you shouldn’t be doing stupid stuff like being in bands.” 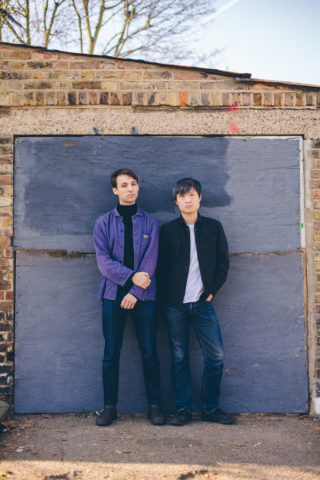 That Gong Gong Gong didn’t follow a traditional path is at least partly responsible for their unique sound. The two have almost psychic-like onstage chemistry, allowing them to really elevate what two people playing stringed instruments can do. All interweaving riffs and cascading rhythms, the band’s hard-charging grooves evoke everything from early rock and blues to psychedelic drone, Southeast Asian pop and even the structures of electronic dance music. These achievements are even more remarkable when you consider that the duo plays without any drummer or percussive instrument at all – it’s just them and a couple of guitars. In a concept that Ng and Frank call the ‘phantom rhythm’, Gong Gong Gong conjure up an aura of a ghostly kick drum and snare hits that seem to seep naturally from the interplay between their two instruments, even though they’re not there at all.

Ask the band how they arrived at this sound, though, and all you’ll get is a bemused shrug. “It’s cool when you see people tapping or even air-drumming along with us,” says Frank after some rumination. “It’s cool that we can have that kind of an effect on people. In a way, it’s an instant validation of the techniques we’re using. I see someone nodding or clapping where the snare drum should be and I’m like, ‘there you have it; you really don’t need a drummer to get people to do stuff’.”

“I’m just so used to being the percussive driver of any band that I’m in that I’ve never really noticed that we haven’t got a drummer,” Ng tells me after also musing on the topic for a few seconds. “I always say our music is often more physical than musical. Good music can be fast or slow but it always has to be something that you can feel.”

“I think we’re both really drawn to music that is from different places but tap into the same spirit somehow,” says Frank. “We’re both into Bo Diddly, for example, who has that really stripped down blues and rock ‘n’ roll thing going on. But then, you can also hear the same thing in West African music or South Asian pop. I like the idea of tapping into music that is elemental but it doesn’t sound like anywhere. It’s as if there’s a certain groove that unites everything if you know what I mean?” 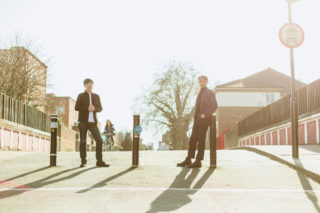 Gong Gong Gong might be trying to tap into something universal, but the way their going about it is against the grain. Even though they proudly call Beijing home, both Frank and Ng are acutely aware that they’re outsiders, not only within China but also within the western music world. It’s an energy that they seem to thrive on.

“It’s cool to be part of a world that’s becoming a much more borderless place. We seem to be in this moment where people are interested in stuff in a way that’s not just about the novelty factor,” Frank beams, illustrating the point. “We have a friend who’s a Chinese rapper based in New York, but can sell out shows in the States and in China, and I find it very inspiring that he can weave all these western and eastern influences together and can play it to an American audience who don’t fetishise it, and take it completely how it is. I mean, we’re not in the same scene as him or anything, but it’s cool to hang out, eat spicy food together and figure out how we can make sense of being from two worlds, as it were.”

For Ng, sticking to Cantonese is all about maintaining a level of truthful honesty to his band. “When I was younger, I’d see all these bands in Hong Kong where the singer would try to sing in English,” he explains. “I found that really weird – I mean, it’s not my mother tongue and I’m definitely not confident enough to write songs in English. The same goes for when I moved to Beijing and I started to learn to speak Mandarin. Either of those languages would probably reach a wider audience, but it just somehow… it just seems uncomfortable for me.”

“Do you remember when we played in Chicago and there was that guy who came up to you and thanked you for singing in Cantonese?” asks Frank. “It really means a lot to people – you don’t come across it all that much these days.”

“That’s true,” says Ng. “I’m definitely not doing it to please anyone, but if people appreciate it, then that’s cool.”