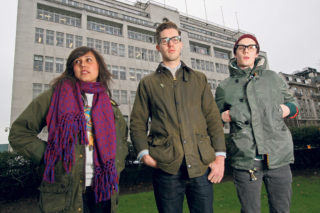 An intense heat permeates the tropical air as a volcano rumbles evocatively around the wide expansive shores of Graffiti Island. Sounds like a pretty special place to be this time of year, but for the exploratory members of said band an East London cafe will do for now. Looking seriously relaxed after a new-year break, Pete Donaldson (vocals), Conan Roberts (bass/guitars) and Cherise Payne (drums) have been gallivanting off to locations that typify senses and feelings that their band’s name evokes. Born in LA, the loose, lucid conversationalist Pete spent some time there over Christmas before shooting off to New Zealand. Drummer Cherise’s nomadic nature found her arriving in Mexico with no place to stay, and Conan, well he just stayed in London – “I’m English through and through,” the articulate guitarist lends with good humour.

A multi-cultural threesome the band are less informed by where they come from, its more about the ambience and taste they create. “I don’t think musically we are influenced by America or London,” says Cherise; an outlook that seems to fit with their inception having formed simply through boredom and wanting to hear music they actually liked. And so a languid, comfortable style emanates through the band as Cherises’ propulsive drums ebb and flow with Conan’s rhythmical string work, but it’s Pete’s vocals that make Graffiti Island electrifying. His deadpan delivery entices you in with a nonchalant style; acid sharp wit and an almost mantra like repetitiveness combining to make Graffiti Island a truly unique prospect.

Clearly just as sharp off the stage as on it, Pete peppers small talk with equally dry material as his lyrics. “We are never really aware of people coming to see us, in my mind they just happen to be there having a nice time,” he drawls refreshingly, even if they do have an audience, found via the Internet. “We have had a lot of interest from other countries on the internet,” admits Cherise. “Our sound isn’t English, probably because of the stuff we listen to and Pete’s voice is obviously not English.”

“I think with English bands the audience are more inclined to look at what’s going on in major music magazines rather than looking on the internet,” adds Conan. “Underground music seems harder to find here.” 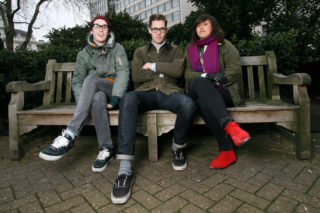 A glance at Myspace or the Voodoo Village will leave you bewildered, whether it’s a one armed baby Nazi or a 90-year old wrestler from Russia, the pictures are powerful. OK, so I made these up but the unfathomable nature of this imagery has a mood all to itself. This esoteric attitude is not without good humour and much of it finds its way into the music. “When I write my lyrics I am always thinking about imagery,” says Pete. “I have an idea in my head about what I am seeing; it’s like a certain taste.”

Animals must preoccupy much of Pete’s thoughts, in that case, because a beastly ambience is omnipresent throughout. Song names like ‘Wolf Guy’, ‘Pet Snake’ and ‘Demonic Cat’ linger with you long after the tracks have stopped – “Obviously I like animals, writing about them, singing about them, touching them and whatever.”

For a guitar band especially, Graffiti Island is an original prospect; not even your archetypal release band, proved as they made there own cassette with two like-minded artists: the excellent ‘Pens’ and ‘Male Bonding’. With each band doing their own artwork (Pete drew a diagram of a human head) distribution began at selected record shops and gigs and even the method of production was faintly underground.

“I got given 300 cassettes; I just took them without thinking,” explains Conan. “It didn’t cost a thing and it was real DIY. We made 10 tapes and sent them to a New York record store but apparently all the music was backwards and on the wrong side of the tape – we couldn’t have got it more wrong!”

Somehow though, it seems fitting, and with the band kicking back as we drift back to Graffiti Island what album would soundtrack the surf for each of the trio? “Brian Eno’s ‘Here come the warm jets’ no question,” answers Cherise. “Anything by The Vaselines for me,” adds Pete. “Blink 182, ‘Dude Ranch’,” adds Conan. “I’ll be having much more fun than you two.”