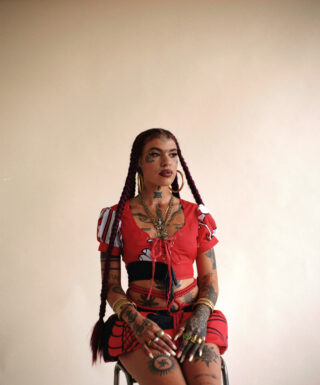 “Ultimately, it’s an offering isn’t it?” Greentea Peng tells me. We’re talking about her debut album, which was recorded last year in a house in the depths of Surrey woodland. Here, Aria, as she is known to her friends, retreated with her band to process the trauma we were all living through in the midst of the pandemic. The result she describes as an attempt at healing. It’s “an offering to the collective”, the spirit of all humanity. Unity. Totality. Oneness. That’s the vibe she’s bringing for this project, an hour-long, 18-track album called Man Made. “I wanted it to be one hour eight minutes long. 108, 18… good numbers. But it turned out to be one hour one minute long. 11, which is my number. 18 tracks. So, I’m happy with the numbers. I think that there could have been a lot more music on there in terms of how much we made. It could have been a lot longer. We kept it as concise as we could have, going through the year that I did and the emotions and the roller coaster that I did. It’s not a tube ride album; it’s a make your environment, sit down and listen. I wanted it to be a trip. It’s meant to be a trip – you’re meant to enter it. One way in, one way out.

“I’m doing it for the collective, not the culture,” Aria says, paraphrasing one of her lyrics as she pushes her plate towards me. The idea of the collective comes up a lot as we chat, sitting in the cold May sunshine outside Kilis Kitchen in Islington, eating what is probably the best baklava in London. (“So good right?” She laughs, seeing my face as I bite through the thin, syrupy pastry. “I keep coming back here. I can’t stop coming here and ordering this stuff”). “The collective,” she explains. “It’s not a passing trend. It’s totality. Because the collective’s first and foremost – totality – it’s us as a tribe. I’m not really trying to [make music] for any one section. It’s collective, do you know what I mean?”

I do know what she means. If lockdown and the fear of human contact (not to mention the disastrous consequences of the raging egoism in power everywhere you look) have shown us anything, it’s that we need one another – and it’s that we need more ways to recognise and connect with one another’s humanity than the options that are currently available. “The reign of the individual, I think, is coming to an end,” Aria says. “It seems to be just not sustainable.” 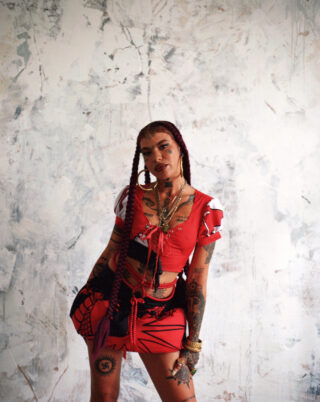 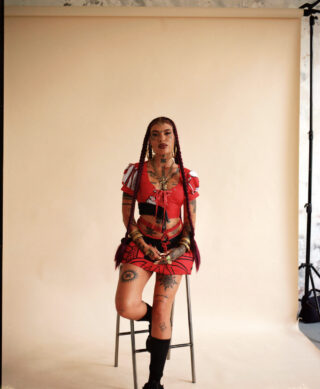 This turn to the power of collective energy is reflected in the making process as well as the sound of the new record. If Aria’s previous music has been produced as something of an isolated undertaking that sees her laying pre-written lyrics over other people’s instrumentals, Man Made was a much closer collaboration. The band stayed in her friend’s house in the woods for a month, setting up a studio and working together to produce the project from scratch, detuning instruments to change the frequencies in which they recorded, so as to enhance what Aria calls “The healing properties,” of the album. “It’s meant to be out of tune with Babylon basically. It’s not meant to fit into this industry standard.”

“It’s a provocation of spirit.” She expands. “It’s not meant to be anything except get people in their feelings. And that’s what I want. I want it to resonate.” This spirituality is, of course, at the core of all music. But Aria is right that there is something especially, unusually, resonant about the sound of the music on Man Made, which pulls in influences from trip-hop, R&B and jazz vocals. It’s both nostalgic (my favourite sample is the reference on ‘Dingaling’ to Blak Twang’s classic track ‘So Rotton’) and also utterly now. There is a lightness of touch in the way Greentea Peng manages issues that might be controversial in other hands. On ‘Nah It Ain’t The Same’, for example, she plays with ideas of gender and identity, managing to tap into the current culture wars without adding to the toxic divide. “At the end of the day we’re living in controversial times and for me there’s nothing else to fucking talk about is there? I’m not trying to add fuel to any fires. At the beginning, of the album I was in a mind-state where it was gonna be a super political project, but that’s not what we need. That’s not what we need, bruv!” She takes another bite of baklava. “I’m just exploring all the themes. There’s lots of bandwagons about right now, but I’ve never really been one for a bandwagon.”

If all the talk about the collective and the spiritual sounds fanciful in the context of an album promotion, there is something straightforward about the way Aria discusses the spiritual or mystical dimension of our existence. She reminds you of its practicality. That is, if we want to align with what’s meant for us, there isn’t really a choice but to tap into some kind of spiritual energy, whatever that might mean for us individually. “Obviously, we’re all on our own spiritual journeys whether people wanna realise it or not,” Aria says. “And you can keep missing the signs – you can keep ignoring things, getting into the same patterns and cycles and choosing to ignore it, but you’re still on the same spiritual path, you’re just choosing to reject it. And I stopped choosing to reject it and started choosing to embrace it. I don’t class myself as a highly spiritual person, you know. I drink, I take drugs. I’m fucking negative. I’m no better than the next person, but I’m open to the mystical side of this existence and I guess most people aren’t.

The call to creative expression has been part of Aria’s spiritual journey. Living in Mexico, she realised that the performance and writing she had loved as a child were missing from her life, and that maybe this was connected with how miserable she was feeling. “I  guess I didn’t really notice the correlation between the lack of creative expression and the misery for a long time – and then I did, and I started singing again and everything just kind of literally [fell into place]. It’s ridiculous really. From singing, really waved, at an open mic night, to just playing gigs around the town I was living in. It was pretty full on straight away – getting booked out and shit. And then moving back to London, only planning on being here for the summer, and things taking off here and before I know it it’s three years later and I’m here.”

Still, there is a difficult path ahead maybe, trying to align a spiritual, healing journey with the notoriously toxic culture of the commercial music industry – not least because the promotion of a solo album requires the kind of self-absorption that surely goes against any notion of the collective. I wonder how she’s going to balance the necessary compromises of making money from a spiritual pursuit. “I’ve only just entered into [the indusry],” she replies, “so I’m still kind of gaging some sort of equilibrium, or trying to – so fuck knows really how I’m gonna balance it. Let’s see, I might not. It does seem like it’s gonna be quite stressful to be honest. Especially because it’s just not really in my character to do half the shit that I’m having to do these days. But I just kind of accepted it as part of the exchange of getting to do what I love and live the life that I want to live, relatively free. And part of that exchange is the Babylon shit – the self-promoting, talking about yourself all the time, taking photos of yourself all the time. All of that shit when all I wanna be doing is making music. Hopefully I will find some sort of equilibrium.”

For this album at least there is a real sense of a that balance. Of hope, even while acknowledging that things are a mess. Aria leans back in her chair: “My dad just died, and then I went to make an album, so there’s obviously a lot of grief in it. There’s a lot of grief in me to be honest, as a person. So obviously that’s gonna translate in the music. But I do try to always round it back up to love and unity – that is my main thing. So even when I’m exploring themes of grief and depression, and of, I dunno, rebellion – obviously I’m pro people, so I’m not trying to put something into the collective that’s gonna bring people’s vibration down. I’m trying to do the opposite. It’s important to me. I think all my songs do touch on sad subjects, but it doesn’t need to be a dread song, you know what I mean? I never want to just add fuel to the fire and not offer up any solutions.”