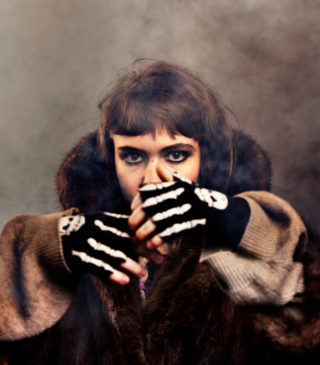 'Grimes is not an alter-ego, it’s just me without all the bureaucratic bullshit'

On one end of an old Chesterfield sofa in an upmarket north London gastropub, Canadian singer and producer Grimes – Claire Boucher to her mum – is mid-flow: “…like, people will say to me, ‘Claire, why don’t you learn another language?’. But why would I want to say the same thing in a different language, and spend all those hours? It’s going to take like 900 hours or more or something to learn how to say something that I already know how to say.” We’ve reached this point in the conversation via a discussion of the reliability of memory, the Internet, sleeping rough, music software, spaghetti sauces, and whether, crucially, Boucher might suffer from a short attention span. As a follow-up, I ask if she might consider music a kind of…

“Oh yeah, of course music is a language,” she concedes, “but I don’t think you have to learn it, it’s just a matter of confidence. I mean, for me it was just like one day I was just, ‘well I’m gonna do it’ – and then I just did it. From the get-go, I was able to make music. And I’m not remarkable in that sense – I really think that anyone could do it if they wanted to.”

She says this with no hint of arrogance or obnoxiousness, but more a genuine disbelief that not everyone is a natural like her. In a way, there’s a charming self-deprecation to the idea that she thinks she’s just like everyone else, but of course she isn’t. After all, this is a personality that has the self-belief and energy, not to mention the lack of self-consciousness, to quit university to promote and distribute two homemade albums that contain literally the first music she ever made, get herself signed to an international record label (4AD, home to the likes of Bon Iver, St Vincent and tUnE-yArDs) and then follow those records with another entirely bedroom-crafted LP, Visions. And while all of her discography thus far carries the traits, good and bad, of a first-thought-is-best-thought writing process, Visions is her most coherent release yet.

Bleak and pulsating and swathed with remarkable vocals that swerve from sing-song playground chant to the whistle register of Minnie Riperton or Mariah Carey, it’s a moody scrapbook of an album where snippets of song ideas nestle comfortably among fully formed compositions. Made at breakneck speed – three weeks from start to finish – and constructed entirely on Apple’s super-user-friendly GarageBand software, it is an unmistakably modern-sounding album: every chord and melody line is digitally filtered and squeezed, as if carved out of raw ones and zeros and low-bitrate mp3s rather than warm acoustic instruments or vinyl.

Its only nod to a time before its own existence is a scattergun array of influences – from the dark electronica of Boards of Canada and schizoid hip-pop of Outkast, to Whitney Houston’s melismatic vocal stylings and even, occasionally, the smoothly melodious end of Fleetwood Mac – ironically itself a hypermodern combination that can only result from ten years of frantic file-sharing. Indeed, Boucher herself has described her music as “post Internet”, referring to the musical eclecticism that has arisen from total instant access to every song ever. “I just always imagine that if Mariah Carey and Aphex Twin came together, that would be the greatest band ever,” she explains, trying to marry the disparate sounds of her own music. “That’s kinda what Grimes is trying to do: bringing IDM and industrial, and all of these sick genres together with, like, pop. Why didn’t Mariah Carey do that?”

Born in 1988, Boucher grew up in Vancouver with four brothers, listening to the industrial rock and metal that was a staple diet for any self-respecting rebellious teen of the noughties – Marilyn Manson, Tool, Nine Inch Nails and the like. “I liked the aggression and I liked the aesthetic of it,” she explains. “There was Marilyn Manson, this icon, just so beautiful, and he was doing the Michael Jackson pop-star thing, where you live your art, except that it was scary as shit.” Although her music bears no relation to the heft and grit of that genre, her appearance still does: huge saucer eyes thick with black eyeliner, and hair – not dyed black for the first time in nine years, she proudly announces – long over shaved sides in a classic undercut. She also sports multi-buckled leather platform boots and home-administered tattoos on her hands, including the icons from 90s sci-fi classic The Fifth Element across her knuckles. It’s a strong, bolshy but ultimately outsider look that matches her disposition. 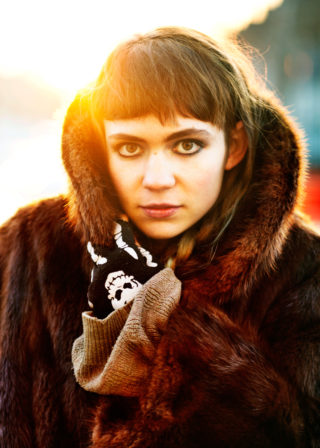 She left Vancouver when she got a place to read neuroscience and philosophy at McGill University in Montreal. With no formal music training or playing experience whatsoever, Boucher got a friend to show her how to use GarageBand, and, in her words, “music suddenly made sense”. She began making tracks, and it’s there that Grimes was born, as an escape from the trivialities of real life: “Grimes is not an alter-ego, it’s just me without all the bureaucratic bullshit,” she explains. “Like, it’s me, but I’m not going to the bank and I’m not buying groceries. When I’m doing normal stuff I’m behaving, censoring myself.” Barely two years after she first launched the program on her Mac, she’s being touted as 2012’s Next Big Thing.

It’s inconceivable that such a meteoric rise would’ve been possible without Boucher’s single-mindedness, and her almost childlike lack of common sense or self-consciousness. Again and again in our hour together, she tells stories that display an unapologetic stubbornness, disconnection from real life and compulsive drive to do exactly as she pleases. She talks of writing one song on Visions in a single sitting, without toilet or food breaks: “I started, and then I looked at the clock and it was 14 hours later and the song was finished – and then I was so hungry and I had to pee so bad.” Similarly, she explains that she’d rather “dumpster dive” for food than work for money: “It’s far easier to spend twenty minutes digging through trash to get some good food than to go and work for like eight hours. That way, life is free. It’s just days off, hanging out, making music. It’s so much better for me.”

This slightly pulse-quickening sense of danger, of a grown-up behaving like a feral child and still enjoying success, can be a seductive character trait, and it makes its way musically onto Visions, too: song structures and harmonies that one suspects might not even occur to more reverential or experienced musicians are all over the tracks. Indeed, it is perhaps the most compelling quality of Grimes’ music that so many of her songs feel impish and gotten-away-with, slightly forbidden, and almost wilfully (if non-traditionally) sexy:

That unconventional allure, though, is something that Boucher welcomes: “I don’t want to make blatantly sexy records,” she insists. “I mean, I feel prettiest when I’m wearing a trench coat or whatever, because I think it’s all about confidence and intention. For instance, Britney Spears is not attractive, because of the desperation in her life. I find aggression sexy. I think power is sexy. Like, Leeloo in The Fifth Element [Milla Jovovich’s character] is the hottest girl in all of Hollywood, because she’s got power. And what’s the coolest shit that’s happening right now? It’s people making video games, or hackers – the coolest, most attractive people are geeks.” 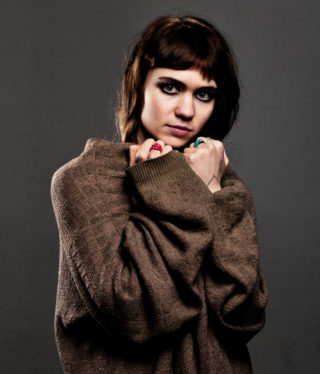 So is Boucher a geek? Despite plenty of supporting evidence – the Fifth Element fixation, the naming of her first album, Geidi Primes, after a planet from the fantasy book Dune, the nights spent hunched over a laptop denying her bodily functions – she denies it when asked directly. Nonetheless, geek or not, she acknowledges being in possession of a curious type of sex appeal, and is circumspect but pragmatic about its use.

“My femininity is in no way the basis of what I am doing, but I know sex sells, for sure,” she says. “And I definitely have played that card. Sometimes, you’ve got to look in front of you and recognise that there is a way to make things slightly easier, which will lead to a lot faster success.

“And that doesn’t mean being like, ‘oh, my tits are out’, but it does mean that if someone says do a fashion shoot, you do it, why not? I recognise that that’s not the purest way to look at it, but I just think I am really good, and I want power, and that’s a faster way up the ladder.”

With a simultaneous cynicism and naivety, confidence and humility, and a bulletproof sense of ambition, it’s easy to think of Boucher as a desperately precocious, disarmingly intelligent little girl (with all the charm and exasperation that that phrase suggests) stuck in the body of a rather mysterious 23-year-old woman. Her ideas are frequently underdeveloped, but they are delivered with a force-of-nature personality that more than compensates for the rawness – a situation that feels deliciously punk, even if her music doesn’t sound anything like it.

She wants to do everything (being a film maker is next on the list, apparently), and sees no reason why anything should get in the way of achieving that: the internet will provide, she is sure, and her own curiosity will drive. “With art, I have no preconceptions of how it should be made – I’ve no muscle memory that’s been drilled into me – so it’s a totally free universe of exploration, a constant discovery, and I love the feeling of figuring things out, it’s like Legend of Zelda or something.

“And,” she adds, as if to demonstrate that anyone can do what she’s done, that’s she’s not that special really, “all the information you ever need is on the Internet.” For Grimes, certainly, and maybe anyone else who wants it enough, success can be boiled down to a series of clicks.