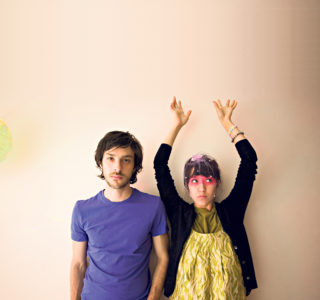 “Loud And Quiet is fucking us in the ass!” spits a neon war-painted Lo in our general direction. “How come we’ve played your club but not been in the paper yet?”

Patience, clearly, is worthless in the world of Heartsrevolution. It’s been five minutes since Lo and her band alighted the Dirty Bingo Vs Loud And Quiet stage and already we’re being pinned against the wall by the tiny singer. “Do you like my rings?” she then asks excitedly, fanning out her fingers decorated with oversized jewels; the type usually found in arcade machines. “Where’s my one from you? You owe me one… no, two.”

It wasn’t always like this y’know. Six hours earlier Lo arrived at Camden’s Monarch in an altogether shyer mood. Along with Ben (Lo’s modest boyfriend, synth-controller and Hearts co-founder), her large opal eyes peeped around the door of the north London boozer for the politest of hellos. The duo – and only fulltime revolutionaries – came flanked by stand in drummer Franki (usual live sticks-man Prince Terrance otherwise engaged on tour with Santogold) and sometime visuals provider Kate Moross. The four waited patiently for their sound check, quietly taxing the venue’s Wi-Fi on their laptops.

But with a fluoro pink strip of makeup across her eyes comes too Lo’s explosive and mischievous onstage persona. Like a Roman candle in a biscuit tin, she fiercely ricochets around come showtime, yelling into a distorted microphone to the thrashy, glitch techno zapping from Ben’s keys and buttons. Moross provides backing yelps and the overhead-projected display. Franki drums to the sounds wired into his headphones so hard he busts open his fingers. And all of this started in The Standard Hotel, West Hollywood.

Leyla Safai and Ben Pollock met checking in and waiting on guests, neither intending to pursue a career in the accommodation industry. Unsurprisingly – especially considering Ben’s willingness to remain somewhat in the background of Heartsrevolution – it was the singer who made the first move. “I saw him in a dark dungeon and I walked past him like this,” reminisces Lo, re-enacting a swift trot past her man. “And then I walked back again like this and said something to him, and he thought I was stupid. And I thought ‘That guy’s hot’. And then I went on a date with him and I knew I was going to be with him forever and ever.”

“But how did you guys start making music together?” prompts Franki who also owns New York label ihearcomix, unleashers of Heartsrevolutions’ ‘Switchblade’ EP. “That’s what he asked you.” But a loved up Lo is now too busy squishing the cheeks of her beloved to care. Luckily we already know that, musically, the couple first worked together when Lo asked Ben to make a jingle for an ice cream truck she’d laid her hands on. Ben obliged, Lo provided vocals of sorts and the first vehicle in what has now become the Heartschallenger fleet was ready to run, distributing confectionary so colourful that Willy Wonka himself was gearing up to sign on.

Lo says: “We didn’t have real jobs so we did the one truck in LA and kids liked it so we took all the money we made and bought another truck, and then we’d do some big event and buy another truck. We’ve still not got any money but we’ve got a lot of trucks. And so all of our friends started to work for us and run the different trucks in different cities, so they didn’t have to get jobs.”

Typical stock for these mobile gift shops includes ice creams, toys, candy and Hearts t-shirts, button packs and stickers. A simple rule that all stock must be interestingly packaged, bright and colourful applies to every item sold. You’ve no doubt heard whispers of these Heartschallengers – after all, how many new bands own not one but their own fleet of ice cream trucks? – but some confusion has been voiced about what a Heartschallenger actually is, if not the name of the vehicles themselves.

“It’s not the trucks that are called Heartschallenger,” explains Lo. “They all have their own names and own energy because they’re all old and beaten up in some way but have a nice shiny coat of pink glitter and pink paint. But if you look at them closely they’re a mess that’s been covered up, kinda like me. It’s a metaphor for my life,” she giggles.

“Everyone has that thing that’s the hardest challenge in their life that they have to overcome, and the greatest challenges come from the heart so… I like to push the line, and if you can do that and knock down walls and barriers…”

Lo trails off and gestures towards Ben and Franki. “Look how interested my friends are,” she grins. “Now do you see why I don’t want to talk?… but look how cute he is…”

And with that Ben’s face gets another good ol’ squeeze.

Absent from our post-show interview is Brit graphic designer and founder of her own new Isomorph label, Kate Moross. The Hearts part-timer isn’t so due to missing our chat (she’s not been feeling too well all day and so has headed home for an early night) but rather because of the 3470 miles separating her London base from the rest of the band’s in New York. Between her various illustrative projects, she provides Heartsrevolution with live visuals whenever she can.

“We met her in New York via a mutual friend, and really hit it off as friends…” says Ben before Lo jumps in.

“I had sent her a record a year prior and she never replied!” rants the singer. “And then my friend was like ‘you know that girl Kate? She’s here from London’. And I was like, ‘Fuck that bitch, she never fucking replied to me! I don’t like that girl!’ And then we hung out and hit it off. So I said, why don’t you join the band, because then we don’t have to be around anyone else but our friends.”

“It’s all about building a family,” smiles Franki, prompting a wincing, laughing “You’re such a fucking homo,” from Lo.

But when the banter isn’t flying and the ice cream trucks are stationary, when Ben’s cheeks are just that and not Lo’s Playdo for pummelling, Heartsrevolution produce a trash metal that proves, at the centre of it all, the music matters. On record – beautifully packaged, limited vinyl treats no less – tracks like ‘Switchblade’ lash like Justice, while Lo’s fuzzy, hyper-angelic vocals are being compared to Alice Glass’ of Crystal Castles. For now, with Heartsrevolutions’ 8-gigs-in-7-days UK tour over, and the group’s core having returned to NYC, we can defend that recurring comparison, safe in the knowledge that an extra fistful of Liberachy rings won’t be demanded of us as way of punishment. Because Lo, of course, doesn’t see any similarities in the slightest.

“Everybody here comes up and asks us how we feel about the Crystal Castles comparison,” she says “and it’s a lazy comparison, other than the fact that I have a vagina and [Ben] has a penis, and we did a split together two years ago, or whatever.”

But that’s day one at Modern Rock Star School, isn’t it? Never take a comparison, however true it might be, laying down… or bending over. Heartsrevolutions (complete with their ‘Choose Your Own Adventure’ mantra) clearly have a far more overt zest for life than Crystal Castles. Having interviewed both bands, they’re far less guarded, sceptical, contrived even. In fact, Lo and Ben couldn’t be further from such personalities. And yet, to deny their similarities to the Toronto duo would be foolish. On stage, Ben manipulates glitch synths, samples and pulsing dance beats. Lo dives around the stage, yelling incessantly, often falling to her knees in order to start and continue the party. It’s as exciting and original as you’d hope it to be from a band being hailed as ‘the new CCs’. And if you’re a one-band kinda gal/guy, currently on a fence separating the gardens of Crystal Castles and Heartsrevolution, just remember that only one of the playgrounds serves ice cream while barraging you with the finest 8-bit glitch techno punk rave thrash trash metal… or whatever the fuck it’s called.