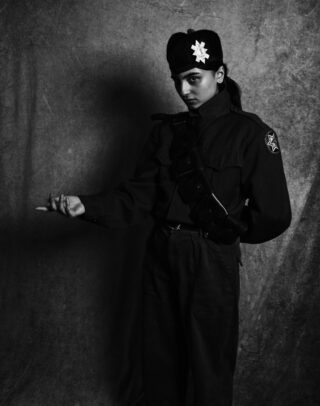 Heartworms’ ‘Consistent Dedication’ music video is a black-and-white gothic tableaux; Jojo Orme, the musician at the heart of the project, performs to the song hypnotically, concealed coldly behind a pair of sunglasses. The project’s only officially released single so far, the track writhes with a tense post-punk backing and twisted imagery. But the Heartworms name isn’t just nightmare for the sake of nightmare; I had assumed it was chosen to fit in with the rest of the project’s macabre imagery, but it’s actually derived from the name of the sunny 2017 album by The Shins, a band Orme holds close to her heart. It’s a nice analogue to the dark, cryptic exterior that belies an open friendliness at Orme’s centre – when we chat over Zoom, I’m surprised that she speaks dreamily and earnestly, exuberant with passion. This is a person who leaps out of her seat several times during our interview to show me the things in her room related to my questions, from Post-Its of her poetry to her drawings of Spitfires. When I ask her about her obsession with the latter, she answers, in sincerity, “I’ve been struggling with a lot for a very long time. And I found something [military imagery and history] that makes me feel very grounded.”

Orme signed to Speedy Wunderground in September of this year (she’s just moved into a house near label head Dan Carey) and her sound certainly fits with their catalogue. In her music, you hear the cold wryness of Speedy alumnus Sinead O’Brien, the bullet-like bluntness of Kraftwerk and the sharpness of Interpol.

In line with the latter band’s strict, minimalist sense of style, Orme boasts a sizable collection of 1940s military paraphernalia (her favourite is an RAF bomber jacket) in which she often performs as she opens for artists like Lime Garden and Sports Team. Yet Orme reveals to me in a whisper that she already is growing tired of performing in her uniforms. “I mean, it gets so hot,” she laughs. But her passion for World War II is still at the heart of everything she does. She volunteers at the Royal Air Force Museum (her last gig, as of the interview, was at the Queen’s Jubilee), and behind her I can see that her apartment is dotted in build-it-yourself kits of aeroplane models. She holds an obsession with the era’s codebreaking as well: inspired by Simon Singh’s The Code Book, she intricately details her plans for multi-step ciphers in her record packaging (I won’t spoil the surprise here). 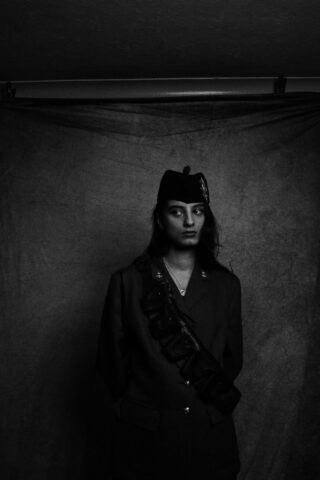 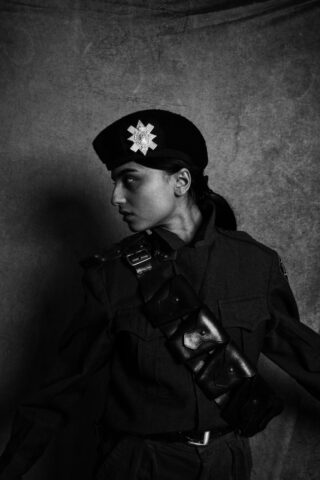 As a post-punk fan who is keenly aware of the genre’s occasionally problematic tendency to flirt with fascist imagery, I ask her about how she manages her relationship to this history. She says that she doesn’t take it too seriously – “it is art” goes the brief clarification she sends in an email later – but does note that she does try to mix and match pieces of uniforms when she wears them, to make something new. “I feel like there is a line to cross,” she says, carefully. “Me – my military stuff – I don’t go for a full uniform that’s all the same. I mix up as much as I can.”

Her lyrics, as she says herself, are very Kraftwerkian: simple, eerie couplets punching rhythmically like pistons. Orme was a poet before she was a musician, but when I ask if she’s changed the way she writes poetry after all the songwriting, she answers, “It doesn’t change because of the music; I just changed the poetry because I’m getting better at writing it.” She’s a deeply imagistic poet, in any case; there are many graphic motifs across both Heartworms’ released and unreleased songs, with eyes featuring the most prominently. ‘Consistent Dedication’ features a pulverising refrain of “Endlessly mad / He’ll chew his eyes.”

Choreographically, Orme’s live performance style is inspired by Prince and Michael Jackson, but she also mentions that she often tries to channel Aldous Harding, especially in terms of eye contact. I wouldn’t have expected Orme to name a folk singer rather than some gothic rock icon – but there’s that paradox behind the Heartworms name rearing its head again.

“[Harding] makes you feel quite uncomfortable, but you can’t stop looking at her,” Orme says admiringly. When I posit that there might be a connection between this and her lyrical fixation on eyes, Orme stops to consider it. “Maybe,” she muses. “I never thought about it. I like eye contact; there’s something quite nice about it. You’ll get to know a person in more depth if you actually look them in the eye. Some people just like to look around when they’re face to face with you.” I can’t help but suddenly recall her performance in ‘Consistent Dedication’s video, and how she manages to balance the clashing edges of darkness, playfulness and confrontation.