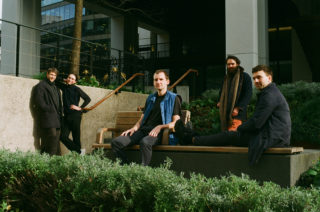 "We’ve sacrificed everything for this band"

Wednesday morning, All Bar One, Moorgate. It’s not quite the classic Simon & Garfunkel album title. We’re being served Smarties in shot glasses. These treats come with an order of a cappuccino; they come with an order of a pale ale. This is not an advertisement. 11am. The wisps of afternoon accountability creep upon us, nobody touches them.

The polite conversation before we start always seems to come back to King’s Cross. It’s where I work most of the time. It’s the accidental Word Art in the background of Coals Drop Yard – a kind of elite companion of Westfield, with more fountains than affordable breakfasts – and the location of the latest press images to accompany the new Housewives album, ‘Twilight Splendour’. If product placement could exist for a neighbourhood, then this is certainly a good working heartbeat of the city – a strange point of exit for many in a daily routine. It pulls a certain interest for a band who abandoned their London rents at the end of last year – one, for a new life with his partner in Sheffield, the others, to live on houseboats. (Not the same houseboat, they emphasise. “We’ve sacrificed everything for this band.”)

“It’s nice not being tied to one place in London,” they say, choosing to talk as one rather than individuals, telling me at one point that they’re not themselves when they’re in the band, and that this band is the most interesting thing about them. “Because we move around so much, we end up in places like this all the time. We don’t have much choice. It turns out that a lot of London is like this.” (This being the All Bar One in Moorgate.) “You lose a lot of the complacency you get from living in a house. These kinds of destinations end up being an extension of the home. You have to be resourceful; you have to find most things somewhere else. You can sit in here with one coffee and have at least three hours of Wi-Fi.”

More Smarties come out. There isn’t even an accompanying order for this round to decorate. Perhaps the waiters heard the nice words, or saw the implied loyalty card from the ease in which Housewives fit their surroundings. The myth of the artist’s rider – wanting only the blue m&ms from the packet – is replaced fervently with wanting quantity over quality. More Smarties? No one’s complaining. They all seem at home here, unfased by slotting into a social etiquette of how you should view spaces in the city. I promise this isn’t an advertisement. Or a cultural geography essay. 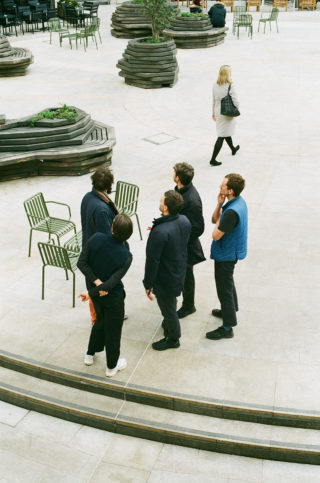 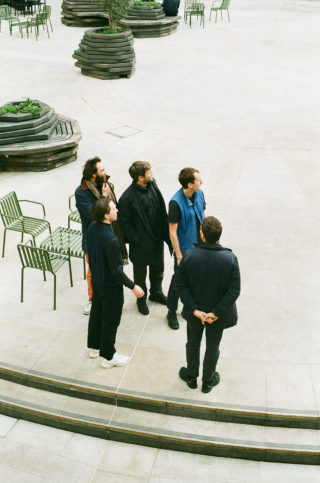 I remember speaking to a friend of mine who recently made a switch to a houseboat. The lasting image was of her balancing her record collection across either side of the boat: a crate diggers’ Noah’s Arc where you have to make all purchases in sets of two. The band laugh. “We don’t have any records.” Before adding: “We don’t have any electricity.” It’s a slightly more earnest take of the Four Yorkshiremen’s “I used to dream of living in a corridor,” but the move seems to be an impractical choice for a band who sold their guitars for Midi equipment, sacrificing a homely power supply to become an electronic presence. “But the biggest inconvenience is still the disconnect to everyone. You’re not tied down to a place, which means there is no home. I guess a lot of people feel like that, living in London. Even if you do have a place, it’s always quite secular. I don’t know if that’s specific to living on a boat.”

The limitations meant a lot of the new album was written in Wetherspoons. “Among a lot of other places,” they hasten to add. “Places that are cheap to be in, that aren’t uncomfortable, where people aren’t trying to move you on. That’s where you really get enough time to focus on something. And have enough power to do it. Power, as in terms of electricity. Not inner power.” Which is the more important power? “For this album, it’s probably equal actually.”

Everything about this record is explicitly digital. Album opener ‘Beneath The Glass’ is about facing away from the mundanity of everyday life by tuning into a mobile phone, a relatively easy object that everyone’s pretty accustomed with. You’re faced with the AnCo innovation – the occasional squelchy, industrial interlude of a Tim Hecker track; the dark and brooding production of Oneohtrix; the post-punk vocals similar to Mark Leckey shouting a love letter from an early source of Artificial Intelligence to its user: “Slip with me, under the glass and into the light/ I only choose content that I know you’ll like.” It sounds like an inverted, uncannily submissive chat-up line from Spike Jonze’s Her. Then there’s ‘Dormi’, an eight-minute pulsing expedition to a MIDI choir, and ‘Texu’, a track that has been described as an alien making a mediocre jazz mixtape for its lover.

“We’d kind of moved away from guitars because of the limitations. I mean, it was never always about guitars anyway. It was always about making something, and guitars were just the things we knew how to play. It’s more refined than that. It’s as much about doing what we can’t do, and stuff we can’t control – stuff that is only possibly by computer, that we can influence and try to improve. You know. That’s much more interesting to us. You’re not even limited by your ability. You can write the verse and then learn how to play it later.”

Even when guitars were in the set – take their performance as part of BBC Radio 3’s Late Junction at End of the Road a couple of years ago – it became a visual feast within minutes. Screwdrivers were being jammed into fretboards, the band almost fully obscured by a backing strobe. We wrote at the time that they started to resemble some sort of 20-limbed sea creature. Two years on and it’s still something that’s as terrifying as it is fascinating.

“That’s what we’re focusing on at the moment, actually. We’ve been playing versions of these songs for a while now. The new album’s been created in harmony with computers and coding, and transferring that into a live show is something a bit more complex. We’ll find out how that works at the same time our audience does.” The potential is a whole new world, though. You have to learn and unlearn as you go. “We were making stuff out of presets. And we started to realise there was actually an idea there – we didn’t know what it was – but we started to create a palette from all these synthesized sounds. We had to think about emotion of these songs in a whole new context, rather than thinking like, ‘ok, this is a sad song so it should have a cello’.

“We were performing a lot, we had quite a similar set up for a long time, playing guitar music to guitar audiences. We became used to the responses we were getting. We wanted to shift because there was something lacking in the performance, in that it could only be so intimate. We were going through the motions of it, but it was performed only to men of a certain age. It felt frosty and caged. We were trying to express ourselves but became placed within the confines of our instruments. Now we’ve become open to things in a more holistic way. I just hope people realize that this is for real. This isn’t ironic. It’s at least some version of the truth.” 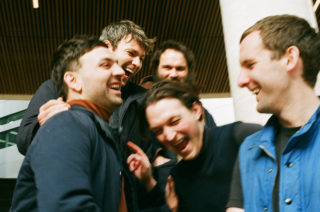 The afternoon moves on, and we’re back to London. More police horses go by the windows, policemen follow on foot at a slightly faster-than-comfortable trot; more businesspeople place foreign language phone calls with heavy duty bags under their eyes and coffee shots slipping through their fingers.

“So much of living the way that we do, you notice the routines and the similarities,” the band say. “This city is just mental. Being part of it is mental. You can find the fashions and trends. Oh, this café gets this sort of people. There are zones people occupy.”

There’s a common sense of feeling displaced and alienated within ‘Twilight Splendour’. Even the aforementioned press shots show everyone standing next to one another on their phones. They describe as one big feedback loop. “We were all probably just on a group chat with one another.”

Everyone in London is here temporarily, they say. “I mean, for me, the reason I moved to Sheffield is because I couldn’t think into the future in London. I just wanted to feel settled.”

Can you think into the future in Sheffield? “Absolutely. Ask me anything.”