Going to a diner or drive-thru to talk and eat is a common occurrence for Brian Ennals and Tariq Ravelomanana. The friends and collaborators have easy chemistry both on and off record, but this trip to the diner ended in a weeks-long silence. The two had planned to listen to their newly-finished album King Cobra together. When it ended, neither of them liked it.

“We both pretended we thought it was good, and then we stopped talking to each other,” says Ravelomanana, aka Infinity Knives. Both admit its creation was a hard slog, financially and emotionally, and the result was a strained friendship – at least in the days directly after the work was done. They’re back to calling each other ugly and messing around in interviews now.

The record fuses hip-hop storytelling, wild electronic soundplay and present-day politics with an apocalyptic atmosphere. There’s aggression, melancholy, isolation and camaraderie laced throughout King Cobra. As a vocalist, Ennals has the power to provoke and inspire, while the off-kilter production from Infinity Knives provides a unique space for his ideas. It’s hard to understand what they were hearing in the car.

The record has been a word-of-mouth success, and the pair have set aside that early doubt, which largely comes from spending time on something that might never get its flowers. Now, as they look for ways of touring the record widely, they share what went into making L&Q’s album of the year.

Skye Butchard: When envisaging King Cobra, is it right that you saw it as a country record at first?

Brian Ennals: Not sonically country, but that Americana storytelling. You see remnants of that in ‘The Badger’ and ‘Headclean’. It’s slices of life, where we’re at right now in society, all that heady shit. Tariq has this country artist he really likes called Charley Crockett who we were listening to around that time. But there was also that desire to make a Stankonia type record.

SB: There’s nihilism on the record, but there’s a running theme of unity among the underclass which makes it feel hopeful.

BE: I think that whether you’re white working class, or Black, or trans, we have all these divisions, but we have a common enemy. There’s a small percentage of people who have their boot on everybody’s fucking neck. That’s the way I see the world. Tariq would throw me concepts and give me parameters within that to help me finish the stories.

SB: You can fully tell that this wasn’t a case of emailing beats back and forth.

Infinity Knives: If that was the case my name wouldn’t be on it.

BE: Then it would be a solo record – when somebody sends you beat packs and you’re writing to it. That’s what rap has turned into in some cases, but that’s not the collaboration we’re working with. We would sit down and say, “You should rap about this” or, “Let’s not use this beat, let’s use this one.”

IK: I would give him a skeleton of a beat, and then he would send me a demo. I’d chop up parts and change the beat based on what he was saying. Take the line “Fuck Ted Cruz forever” – I react to that to make it hit.

SB: Did you clash when it came to making those decisions?

BE: The first batch of beats he made, I couldn’t write to. When he did give me some I loved, he didn’t really like the raps. There was a constant push and pull.

SB: What was the hardest part of making it?

IK: Hunger and being broke.

BE: We started the album in late 2020. We didn’t have a studio session until June 2021. We did seven records and most of them didn’t work. We’d paid all that money and didn’t use many vocals. I was so disheartened because I thought we’d come out of it with the majority done, and we almost had to start from scratch.

IK: We spent a lot more time planning it than we did in the studio. It was really meticulous. Everything is intentional. Maybe if this gets bigger I’ll sell the notebooks that we have.

SB: This is a hip-hop record, but there are also influences from folk and neo-classical. Do you have a favourite instrumental, Brian?

BE: ‘The Bushman’. I still listen to that. I didn’t hear any of them properly until we’d finished it and played it as a whole. I can’t listen to ‘Headclean’ without listening to it first.

SB: You’re referencing classic ’80s sounds in your drums. How do you look back on those sounds without making it just nostalgia?

IK: As far as production goes, I grew up poor, and one of the things to do when you’re poor is embrace the limitations. In the ’80s, they couldn’t sample for that long and the gear was all wack. I tried to put those limitations on myself to bring out that feeling. It’s hard not to make it sound like shlock. And we all love that ’80s shit. I still listen to LL Cool J.

SB: Since I asked Brian, do you have a favourite line from the record, Tariq?

IK: “You don’t want a revolution, n*gga, you want a Tesla.” What’s funny is we’re not dissing anybody. We’re talking about ourselves. I like air conditioning and modern amenities.

BE: I love my iPhone.

IK: In revolutions you lose power. You shit in buckets. I don’t want that.

BE: War is scary.

IK: I’m laying down and eating chocolates right now. It comes off as preachy, but the record is us talking to us, trying to hold each other accountable. If the shoe fits other people, there you go. But these are conversations that Brian and I have. We’re not impervious to propaganda or capitalism. It’s a weird paradox.

SB: I know you’ve said this could be the last collaboration. Do you still feel that way?

BE: We’ve got something else in the chamber.

IK: I grew up with UK IDM, Richard D. James shit. We’d like to mix that in too.

BE: We really want to ruffle some feathers.

IK: We’re tired, we’re broke and nobody wants to take us on tour.

BE: Except for Loud And Quiet, which we really appreciate. You’re off the snub list. 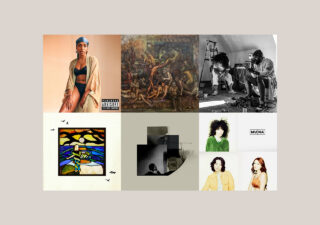 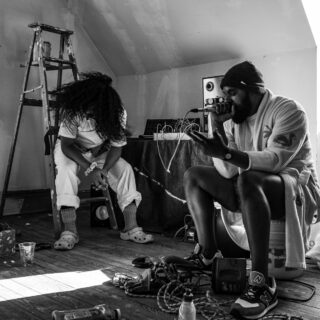