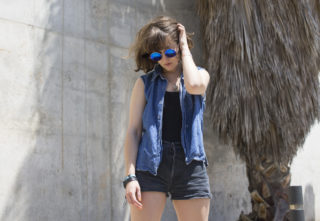 Viewed from one angle, Jessy Lanza is a pop star. She sings short, melodious songs full of sass and bubblegum, hook and counterhook, the kind that are hummable in the shower by the tone deaf, and tappable to on the car steering wheel by even the most arrhythmic of music fans. She appears on her album covers looking alternatively moody and glamorous, and gives carefully choreographed live performances that mimic as closely as possible the recorded versions of her songs.

Viewed from another angle, however, Lanza’s pop stardom feels like a trick of forced perspective. In an era of global pop stars on first-name terms with the rest of the planet – Beyoncé, Taylor, Rihanna, Justin (twice) – the inclusion of ‘Jessy’ to that cadre seems uncomfortable, almost churlish: not for Lanza, the cavalcade of vogueish producers and hired-gun songwriters, bulking out album credit lists until they resemble telephone directories. Not for her, too, the giant sums of major-label money washing up against the gilded doors of New York recording studios, bloating the creative process into a focus-grouped composition by committee.

Instead, Lanza makes her music – pop or otherwise – in collaboration solely with her boyfriend Jeremy Greenspan of Junior Boys in her home town of Hamilton, Ontario, and releases it through Hyperdub, an independent label most famous for putting out tough, pioneering and experimental dance music.

It’s not just her aesthetics, either. Her imagining of a pop song, too, is a knight’s move from anything that you’d encounter on ‘1989’ or ‘Purpose’, presented with an asymmetry absent from her more varnished contemporaries, and refusing to deliver the straightforward payload that they would demand. “I always think of the music I make as being a mashup of all the pop over the last 40 years that Jeremy and I like,” Lanza offers by way of brief self-description, perched on a sofa shaped like a giant pair of lips in a soulless Barcelona hotel lobby, a couple of hours before performing at Primavera Sound. “But it’s a hard one for me to answer. I see it as being pop music, but I know that when I say that to some people, it probably doesn’t make much sense.”

Given her presence on concert bills over the past three years alongside the likes of Caribou, DJ Rashad and Teklife’s DJ Spinn rather than anything more chart-friendly, Lanza is probably right to question the logic of her self-proclamation. That ambiguity, though, is exactly what’s interesting about her music: it’s also what offers multiple points of accessibility, from the melody-addicted pop kid down to the amateur production boffin glued to online Ableton tutorials. And, as with the art, the artist too: an hour in Lanza’s company reveals a personality as ambiguous as her records, one that feels happy in her own skin but also humble, unbothered by the trappings of “cool”, and as approachable as any friend with whom you’d spend an evening in the pub.

In short, Lanza’s is a very modern story, free of genre labelling or stereotype, the product not of a proven formula but of a resistance to that: the pop writer who isn’t a pop star, the cool kid who isn’t hipster, the musician who is, simply, herself. 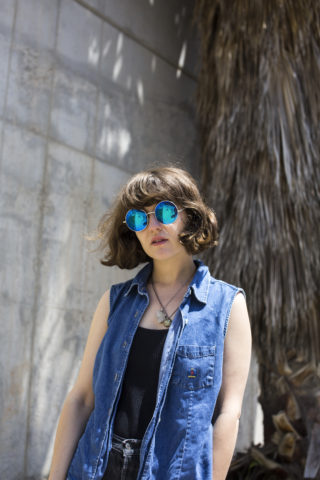 Lanza, the daughter of two musicians, was born 31 years ago in the rust-belt town of Hamilton, Ontario, halfway between Toronto and the American border at Niagara Falls. She first fell in love with music to the sound of Janet Jackson and Paula Abdul in the early ’90s and, as a kid, her parents encouraged (rather than pushed) her nascent love of performing. “My dad was pretty domineering,” Lanza remembers, “but I was always into it too. I was always into singing at school and talent shows. I definitely liked it.”

She had clarinet and piano lessons for fifteen years before going to Montreal’s Concordia University to study jazz, where she first toyed with writing music seriously. “All my friends at school were all into that neo-soul sort of stuff, so for a long time I made genre-less, shitty singer-songwriter stuff to accompany it,” she explains. While at Concordia, she wrote and recorded an album, but her heart wasn’t in it. “I just didn’t know what I was doing,” she confesses. “I’m not ashamed of that record, necessarily, but I think I’d be pretty horrified if it surfaced!”

Becoming increasingly disillusioned by the strictures of her course, she dropped out and returned home. Skint, working three jobs and back living with her mum, she eventually ran into fellow Hamiltonian Greenspan, who gave her a copy of the recording software Logic. Everything started to change. “Before that, I was wandering quite a bit, it was a weird time,” she recalls. “And then I basically just taught myself how to use Logic through YouTube tutorials – If there’s anything you want to figure out, it’s on there! – and just slowly Jeremy and I worked on a lot of different music before we got to what became the first record.”

That album, 2013’s ‘Pull My Hair Back’, became the blueprint for Lanza’s sound: gauzy, gossamer and with earworms aplenty, but also served with a level of studied detachment. That distance, however, was no deliberate hard-to-get ploy, insists Lanza, looking back, but more of a simple necessity: “As much as I like singing, I’ve never felt comfortable with my voice, so I think with the first album especially, with all the different pitch-shifting and delays on my voice, was a way for me to disconnect from it and get into the production side of things,” she reflects. “I’m much more comfortable with hardware in front of me,” she laughs, making a goofy version of the international sign language for playing the piano as she talks.

And what about now? Her second album, ‘Oh No’ feels noticeably peppier – faster, for one, but also more substantial, and just generally a more enjoyable album, both to listen to and, it seems, to have made. “Well, I think I’m just less depressed now!” Lanza chuckles, when asked what’s changed in the past three years. Then she pauses, feeling suddenly bashful about making a potential revelation. “Oh god that sounded awful didn’t it! Like, ‘oh boo hoo I’m so sad’!” she half-grimaces, her likeable self-awareness cutting through again. “It wasn’t like I wasn’t in some sort of deep, dark place or anything, I was just… I don’t know. I think everybody has their ups and downs. It’s a pretty common way to feel, I think.”

Without pausing, she pulls herself back on topic. “But anyways, I think with the second album I just didn’t really care anymore if people felt my voice was shitty. Or not! I was just like, fuck it, I’m going to sing!”

I raise my eyebrows at the idea someone would tell Lanza her voice is “shitty”. “I’ve actually had people tell me my voice is mediocre, which is even worse,” she laughs. “I wish someone would say, ‘oh her voice is shit’, like, ‘you’re total shit,’” she says, emphasising the insults, “But really it’s fine,” she brightens up. “I like it! I think it’s good for your character.”

For many musicians in her position, a throw-away line as self-effacing as that would seem disingenuous, almost a plea for contradiction. But Lanza seems to go out of her way to stay grounded, mainly via her trenchant reluctance to leave Hamilton, a post-industrial town full of ex-steel workers that she describes, with a half-smile as carrying “a lot of broken dreams” and “layers and layers of human misery.”

But despite the comic bleakness, Lanza’s sticking with her hometown for reasons greater than inertia. “It’s is a very down-to-earth place,” she explains, of her decision to stay put. “I think Hamilton’s good for reminding you that there’s only a niche market of people that care about you!” she says, cheerfully. “Hamilton keeps your ego in check, which creatively is good. It’s good to not be in the zeitgeist, to just be able to go into a bar and talk about whatever. You get good ideas that way, by just talking to normal people.

“And,” she adds, warmly, “it’s nice to be close to my mum and my family. I’m a homebody really. Maybe there’s a small part of me that wants to be out there and not care about home, but that’s not really me.” 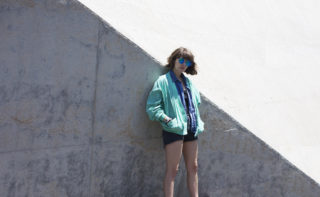 In the hackneyed old story of pop, the starlet always moves from the depressed old provincial town to the gleaming city to become a glittering success. Before meeting Lanza, I wanted to know if she ever yearned to chisel her off-kilter music into a high-kicking pop show – after all, both her albums tease that hunger, albeit in the most tantalising or oblique ways. Clearly, though, Lanza’s ambitions couldn’t be further from that. “I like being under the surface, I think,” she muses, trying to explain where – apart from Hamilton – she gets her self-effacing nature from. “I mean, it’s better than being some sort of Kanye ego-maniac isn’t it? I don’t like that at all; I feel like you’re just setting yourself up to be totally embarrassed of yourself.” She cringes at the mere thought.

Instead, Lanza seems to have adopted the dying art of no-nonsense knuckling down, having a plan and seeing it through. Refreshingly, it’s a workmanlike spirit that also rather augments the experience of listening to ‘Oh No’, too. “This time around there was less flailing around,” she explains. “There was less of Jeremy and me going ‘aggh, does this work?’. We were both a lot more set in the idea of ‘this is what we’re going to do’.”

And that set idea? “A pop – or poppier I guess – record,” she replies.

Lanza’s right to use the comparative: ‘Oh No’ exists on the edges of pop music, but a pleasing sense of the uncanny still lingers, like pop as drawn by M.C. Escher, or taken into a hall of mirrors, almost as if years of academic study of music is stopping her from doing the easy thing. “I know what you mean,” she concedes, “it creeps back in there all the time, all those jazzy chords. I do find myself defaulting to certain progressions that we were taught to practice over and over in school – but as that time in my life gets further away it’s easier to just forget it.

“In the end, though, I love listening to other people’s music and just copying what they do. That’s the biggest motivation for me. I mean, I’m pretty sure that for the past six years I’ve just been writing different shitty versions of ‘Love Come Down’,” she smiles, singing the three-note intro to Evelyn Champagne King’s disco classic. “It’ll always come back to me, like ‘oh this one sounds like ‘Love Come Down’, again’,” she sighs, “and then I won’t finish it because it’s really bad. Then a year later I’ll make another boop-boop-boop!”

She laughs again. As foundations for songs go, though, I suggest she and Greenspan could do a lot worse than ‘Love Come Down’. “Well, yeah, it’s not for lack of trying!” she agrees. “I think Jeremy and I both really like pop music, and really admire singer-songwriters and the art of songcraft. It’s just that neither of us can quite get it right, you know?”

It’s just as well. Viewed from the right angle, then, Jessy Lanza is a pop star. But, far more satisfyingly, it’s from all the wrong ones that her true personality radiates. 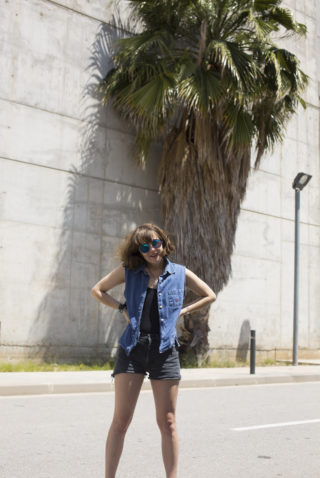