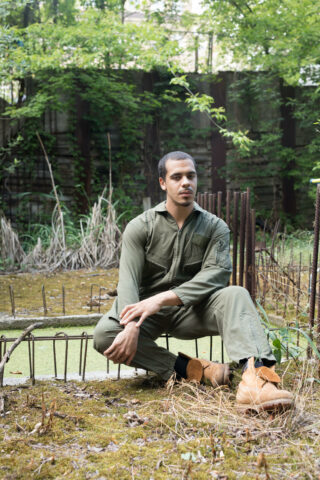 The Detroit artist on protest music, his love of unpolished sound, and the creative heritage of his home city

Detroit native John FM has been working on his creative approach for a long time now. Having come up through his local club scene, he’s now moving away from his straight-up house roots towards a form of fractured soul, yearning for sense and humility in an increasingly bizarro world. On recent EP American Spirit, he fuses open-ended vocal experimentation with a considered dismantling of his hometown’s club palette; the resulting sound brings to mind the work of artists as varied as Yves Tumor, Dean Blunt and Frank Ocean.

There’s an ambiguous quality to the record that matches the bewildering socio-political landscape, yet an emotional directness that offers perhaps not answers, but something beyond apathetic anger. The addled narrative of standout track ‘Holster’ paints the image of a shooting at a house party from multiple perspectives, simultaneously vivid and faint in its execution. Elsewhere, interlude ‘Interim’ compounds the unresolved angst of the record through little more than an insidiously hypnotic jangle atop combatively dulled kick drums, reminiscent of Actress at his most joyfully anarchic. As a whole, it’s a concise, shifting portrait of our uncertain times, sure of only its own disbelief, a mirror facing outward.

The marked shift from the club-focused tracks of his earlier releases is undoubtedly borne from the yearlong lull that is the ongoing Covid pandemic. The project’s inception was marred by false starts, with many of the tracks originating from sketches created across the five-year period since his last record. Speaking to John from his home, there’s a sense that the forced stasis of life was crucial to the process of constructing the finished collection.

“At the beginning of the pandemic, I didn’t know if I was going to continue making music anymore,” he says. “How will anyone make a living off music? With no live shows, that’s really it. So I took my time, lived life. Riding my motorcycle kind of gave me the time away – working on it, doing some maintenance, and just thinking of things other than music. Then I kind of just said, ‘Fuck it. Just put something out.’”

The EP was originally self-released on Bandcamp last year, one of many producers to use the platform to explore less dancefloor-centric excursions during the height of the pandemic. “I think it was really important that the Bandcamp Fridays happened. It just seemed like it happened at the right time. There was a lot of space for introspection and being alone. Headphone music was perfect for that. I don’t think people would have been paying attention the same way if they didn’t have the time to.”

Does this explain the doubling-down on the vocal element that have been somewhat on the periphery of his previous work as John FM? “Even back to my first release with [Detroit house figurehead] Omar S, it had two house tracks and one with me singing. It was always kind of on the cards for me to develop that aspect. When we first met, what interested Omar most was the fact that I could sing, not the fact that I could produce.”

I ask how the cultural landscape of Detroit shaped his musical development. “I always found house music as an easy outlet to put my foot in the door, and then I felt like maybe the right opportunity would present itself to say, ‘Hey, I also do this.’ In Detroit you have to appeal to one of two main outlets. Garage rock is a thing, but really it’s house music or street rap, and the street rap is as involved with the street as it is in the studio. It’s volatile as fuck. So these are your two real options, unless you wanna move to New York or LA, but it was imperative for me to stay here. You don’t survive here, you live here, and you can thrive here. The money goes further than it does elsewhere.”

American Spirit acts as a blurred snapshot of the past few years in America. I ask John if this is an attempt to reclaim the narrative of his country in the eyes of the wider world, or a complete rejection of where it has ended up.

“Since 2016, America has been theatre in its primal form. It’s perturbing – you can’t write this shit, it’s literally happening. We are the fools. The project kind of addresses a lot of that stuff. There’s just so much to grab out here. It’s hard to put concisely, unfortunately.” The record embodies that feeling well – the struggle of making sense of it all and the resulting futility. “Yeah, but it’s a critique,” he says. “Like ‘Holster’, I was at that party, but left before the shooting because I was too drunk. Yet this story happened, and I’m trying to think about it from all angles. A friend of mine was superficially wounded, it’s upsetting. But this is classic fodder for American popular music. It’s recontextualising it, highlighting how strange it is for it to become fetishised from the outside for entertainment. It’s this selling of pain. [By extension] tracks like ‘February’ and ‘Interim’ are like cries, you know? It’s the protest. It’s protest music.” 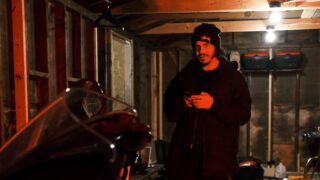 The project now sees re-release on XL Recordings, perhaps the beginning of a trend that will see self-released music from the last year finding wider audiences. “We’ve gone through talks with several labels before this,” says John. “Just deals that never settled, never seemed right. When XL approached us, we just felt it was a really good opportunity.”

There is a refreshing honesty to John’s manner as he talks about his work; a clear consideration of how his more politically-minded music is perceived and how it fits into the wider landscape.

“When you’re trying to make a statement with music,” he says, “it’s hard to be so true and blue sometimes. It’s felt like a conundrum lately to try to put out something that’s so overtly political, while also making money off of it. The thing that you’re fighting is the thing that you’re co-opting to get your point across. I’m trying to work at a way around that. Like the worst thing is something like Kendall Jenner giving a police officer a Pepsi [in the infamous 2017 ad]. Corporations co-opting these movements that actually have something to say and just belittling it. [Pretending] we’re all against the government, we’re all against what’s happening. Yeah, but you’re making money off of it; you’re part of the problem.”

I interject that sometimes I worry that they may not just be tastelessly co-opting, but perhaps they are so delusional that they cannot see the contradictions at play, perhaps a more frightening thought altogether.

“Yeah, the theatrics have blended into our reality way too much. I’m trying to be more of the cause and not the effect of the effect. I’m playing the game by picking up a record label, but I need to live, I need to eat. Ultimately, that’s also going to give me room to speak my mind in a way that will make this accessible to a greater number of people.”

I add that, in the grand scheme of things, people are doing much worse things in this world than putting something out on a record label. He laughs.

“Yeah, you’re right, it’s true. I don’t need to beat myself up about it. I just want to make sure that if I do have something important to say, that it’s accessible to everyone, and to never be preachy, just give them my perspective, and something to think about. A lot of observation, time, patience and pain was released with this record.”

I’m intrigued to find out what music engages John, be it the local scene or beyond. “Cody Chesnutt was imperative to me,” he says. “His release The Headphone Masterpiece never landed as well [publicly] as I would have hoped. But right now, the local street rap: Sada Baby, Louie Ray, Rio Da Yung OG. My favourite rapper right now is YN Jay. [Retrospectively] I always go back to ghettotech – that genre is amazing to me. When I was growing up, driving around with my dad, listening to [artists like] DJ Slugo and DJ Assault, passing all the nightclubs. That was my first little taste of nightlife; I was seven years old, thinking what the hell’s going on in that club!” Artists as far-ranging as Prince, Jay Electronica, Death Grips and 03 Greedo also come up throughout our conversation, and I wonder what defining through-line John sees across these influences.

“The raw flavours are what I look for. Unpolished energy – that’s the number one for me. I love Prince, but I like the demos better. I love [Dean Blunt’s album] Black Metal, but I like the mixtapes more. One of my favourite D’Angelo tracks is a leaked cover of [Soundgarden track] ‘Black Hole Sun’. It’s just a low volume demo on YouTube. I love it because it’s like mixtape culture. Like Dean Blunt on the Babyfather project, he’ll just have his boys doing those world premiere-style ad-libs. That’s such a dope idea, bringing that feeling, you know?” I suggest that it is when you can feel that someone gives a fuck about what they’re doing, but they don’t give too much of a fuck. John laughs. “It’s a sweet balance for sure.”