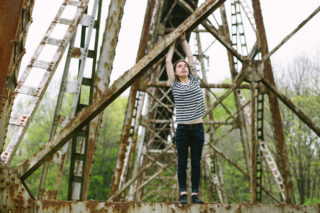 Ian Roebuck interviews the young singer-songwriter as she drives from Nashville to Memphis in an orderly fashion.

“Hello, sir? …Sir, can you hear me?” There is a slight pause before she tries again. “Mr Roebuck, is that you? Oh my goodness!” Julien Baker is on the phone, a 20-year-old singer with spectacular manners from Tennessee. “I’m actually driving midway between Nashville and Memphis,” she says. “I grew up in Memphis but I moved to Nashville for school so I spend a lot of time on the interstate going back and forth. I have a show tonight and then I’m driving back for church tomorrow.” I must sound concerned as she bursts out laughing. “It used to make my manager really nervous but I have those headphone things on so we will be fine. My friends jokingly call me Grandpa Julien because I abide by the rules and everything.”

Driving down the open road but remaining firmly within the speed limit, Julien has the world at her feet. A wondrously received debut album has caught everyone off guard, even herself. “I am so honoured by its reception,” she says. “This is all new; talking to you is totally new. My high school band got our picture in the paper once and that was amazing to me and then all of a sudden I am doing interviews with London and I am like, oh my gosh! It’s overwhelming. It really is.”

Nine personal songs have taken Baker on this journey. Nine beautifully constructed stories about Juilen, laid out immaculately inside ‘Sprained Ankle’, the remarkable album in question. Now this body of work will take her around the globe, something she hasn’t quite got her head round yet. “I have actually never left the United States so my tour that’s about to start will be my first time in London or Europe or anything like that. Some people go on Spring Break to Cancún or a mission trip to Nicaragua but I have never done it – I joke with my advisors that I am leaving school to study live music abroad.”

Julien has a way with words. Polite, sure, but there is a wicked undercurrent to her humour that carries into the music and her performances. “I am so excited about coming to London,” she buzzes. “Everyone has told me I will love it there. I am playing in a beautiful venue called St Pancras Church – it looks breath taking. When I think of church venues, though, my immediate inclination is to not think of large open-nave areas with big reverb. That traditional liturgy is different to me. I grew up in my church and we would ask my pastor, ‘hey, can we use the place after hours for this punk show?’ because we needed a venue for the all-ages scene where kids could come, and so I always imagine church venues as hardcore floor shows.” All of a sudden she disappears. Oh God, I think, somewhat inappropriately. “Mr. Roebuck, Mr. Roebuck, don’t worry I am still driving.” And so we move on to doughnuts.

Julien has a disproportionate amount of social media photos dedicated to a well-known American doughnut vendor and even a tattoo of the baked snack. “Oh yes, I love them,” she says, “but it’s more of an obsession with that brand’s coffee actually. I have a thing about coffee and it’s my final vice, you know. I have quit smoking, I don’t drink, I don’t do anything, but I have to have the coffee. That’s it, that’s all I rely on. It’s a little bit of a stereotype, but tea, you guys drink tea don’t you? I had a British professor that drank black tea, like really bitter and strong black tea every morning instead of coffee. I am a tea person – I was getting a weird heart rate and heart palpitations with my coffee intake so I switched to tea in the evenings, but I didn’t know how stereotypical it was.”

Yes, Julien, we drink tea, sometimes paired with a doughnut.

It’s astonishing to discover that the open wonder and intimacy of Julien’s music can be felt after a few minutes on the telephone. She’s as grounded in conversation as she is on her lyric sheet. “I feel like if art is genuine, you can’t go wrong,” she tells me. “You can be in a screamo band or you can be a hip-hop artist and as long as it’s genuine then that is a characteristic that will be evident in your work.” The word authentic pops up and she jumps on it. “The authenticity of it, yeah. I guess it reminds me that one of my roommates is a filmmaker and he says this thing that art has to be a little selfish to be honest. He said if an artist sets out with a mission statement, like, ‘I am going to make an inspirational record to help these people,’ it will undoubtedly come off as artificial, so all you can do is write from life and hope that it means well.”

It’s that life experience that has connected with such a wide audience. ‘Sprained Ankle’ – an intimate listen of young adult vocals and clean guitar and nothing else – deals with pretty weighty issues, like depression, anxiety and faith, but Julien’s directness still has a lightness of touch that resonates with every listen. “I keep getting messages from people in Spain or Austria and it is so cool to see it have that far of a scope; it makes you feel really connected with fellow music consumers. I think what’s made it easier to be vulnerable is seeing the positive response, when I go to a show and a stranger I have never met in a city I have never been to comes up to me and says I have had an experience and I can relate to this record and it’s helped me, that is the most precious and most valuable treasure of sharing music, and accruing those reactions and putting them away in my mental file is what gives me the boldness to be that open. Otherwise I would be more reluctant.”

We discuss the track ‘Brittle Boned’. When I mention to her it’s my favourite and clumsily give my interpretation of it she handles it beautifully. “There is a Gabriel Garcia Marqeuz quote I love that is human beings aren’t born the person they are when they leave their mothers womb but we are obliged to rebirth ourselves day after day, after day. Well, ‘Brittle Boned’ is kind of focused more on the internal version of yourself; it’s your inner psychological flaws. I just don’t think there is anything to be necessarily cured; we are the people that we are with our biological and psychological faults. I could spend forever not trying to be a type-A anxious person with a nervous disposition and it would never happen. But I can choose how self-aware I am and I can choose how to cope with that. I can choose to be positive or negative, I can choose to lose parts of myself that I don’t like, like my negativity or fear and try to kill those. It doesn’t mean that I am never going to have another panic attack, I’ll probably have panic attacks my whole life, but I can choose to laugh about it and I can choose to talk to other people who are depressed or anxious and use it for good. In that way, we can shape even our negative attributes into positive tools. Sorry, sometimes I talk like that and it seems a little ‘motivational speaker at a conference’, I don’t want to come off that way!”

“Well, to some degree I didn’t have any personal ambitions for this record,” she ponders. “I wasn’t shopping it around to the labels or trying to become an international artist; I just wrote the songs and released them thinking I’ll take it on a DIY tour and friends of friends will hear it. At first it was weird. I am aware that now it’s more than my friends at school listening, and at first I was like, well, how does that shape what I say? I think you can’t make art in a vacuum, and I try to preserve the honesty and conversational nature of my music and the vulnerability because I think if I had known that the record would be received on this level then would it be the same record? Of course not! But then it wouldn’t have been the art that people have connected with and I might have over-produced it or agonised over every lyric and made it into something it wasn’t, so now when I am over-thinking a song I just shelve it right away. I always keep genuineness at the forefront of my artistic pursuit, you know.”