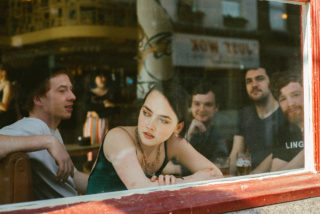 “It’s either music or Football in Dundalk; you’ve got to choose one or the other.” I’m getting a demographic breakdown of County Louth’s famous border town, sitting halfway between Dublin and Belfast. My ebullient guide is Just Mustard’s Katie Ball, proud of her birth place and her decision to hit the stage rather than the pitch. “Sometimes worlds collide though when an Oasis tribute band play in town,” she grins.

“It’s got the best football team in Ireland but also the best small music venue in the Spirit Store, which is so supportive of young bands in the area. It’s just a really nice community. If you play at the Spirit Store at least 50% of the audience are going to be musicians so it feels really inclusive. And it’s a border town on the coast so it’s gorgeous.”

Backed by the rest of the band we find ourselves within reach of the coast once more. Tonight Just Mustard play in Brighton as their tour with Fontaines DC – another Irish band riding a big wave – come’s to a close. “The crowds are going totally mad for them and they really have momentum right now,” says Katie, clearly enjoying the ride herself.

“Instead of going for UK bands they’re choosing bands from Ireland to support them which is really positive,” says David Noonan, Just Mustard’s outspoken guitarist. “There are so many that haven’t come to the surface outside of Ireland yet.” 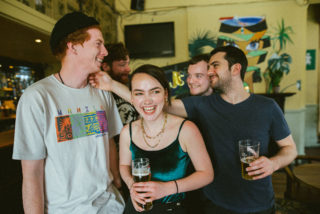 A surprising blend of post-rock and twisted trip-hop beats has awarded Just Mustard an audience in Ireland that the rest of the UK are yet to catch up with. It’s Mezzanine-era Massive Attack by a band whose tour-bus playlist jumps from Aphex Twin to J Dilla. Their debut album, Wednesday, came out last summer to local acclaim, so much so they were nominated Irish Album of the Year at the Choice Music Prize. “There is a new panel every year of Irish journalists,” explains Katie. “They all pick their favourite album and the ones that are picked the most make the top ten shortlist.” Drummer Shane Maguire spells it out for me: “It’s pretty much the Mercury Awards but the Irish version.”

Everyone nods as Shane continues. “A band called O Emperor won the album of the year, which was really cool because they were nominated three times and it was actually a swan song album as they’d just broken up.” Katie seems less enthusiastic after coming home empty handed. “Everyone was happy, but I think my Ma was annoyed as she said they’d broken up so why do they win! Anyway, how can you pick between two completely different albums and judge them?”

Wednesday is remarkable in its density and rawness, having been recorded in a collection of one-off passes with little time mixing. “It wasn’t a stitched together thing,” says David as fellow guitarist Mete Kalyon explains: “We talked about it loads. We wanted the listener to feel like they were in the room with you and we didn’t mind if it wasn’t polished and sounding absolutely true. We recorded it in our practice room and spent time getting it right but that live sound you hear is because of that.”

It’s a record that rewards with repeated listens, and Just Mustard have an uncanny ability of layering tracks, allowing you to unlock new rhythms and melodies all the time. “It is a bizarre song writing practice,” says Mete. “I think for parts of Wednesday, and the new material that we are working on, we start by trying to find a sound. Experimenting with different effects and then working everything in around that. Then Katie comes in with her lyrics.”

Katie laughs. “I say silly stuff,” she says. “The other day we were writing and I said the melody smells like jam for one of the songs, and then I change the lyrics.” 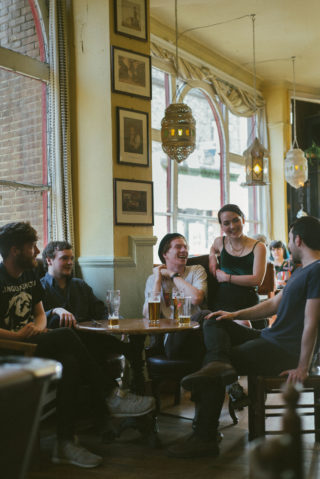 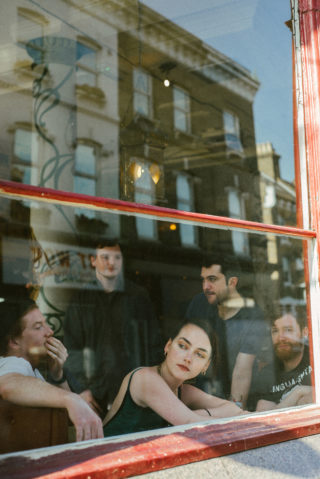 Despite the depth in sound Just Mustard are aiming for simplicity. “That’s true – we are trying to do the simplest song we can,” says David. “Whatever the source idea is we work from that, it could be anything, but typically it’s this one noise that acts as a beginning.

“We also talk about songs in visual ways. I remember saying we really want to write a song that’s like the colour purple and then we went and tried it. A big warm purple sound. We really like film scores too, we take inspiration from people like Hans Zimmer.” Enthused, Katie bounces off David. “Whoever did the soundtrack to The Favourite, we loved that. We tried to rip it off. We spent a whole evening trying to get this loop right. The others came in and were like, this is really good… and we said, yeah, we know it’s really good, it’s the soundtrack to The Favourite!” An unusual touchstone perhaps, but when you hear the warped undercurrent of Wednesday it’s easy to imagine the five friends bounding out of the cinema inspired to create. “Dunkirk came out around the time we were recording Wednesday so the sounds of airplanes were a huge influence on us,” says Mete.

Loops, repetitions, beats; Just Mustard seem to share more in common with electronic artists than with their tour buddies Fontaines DC, and David can see that point of view. “It’s all about similar patterns,” he says as Mete jumps in. “It’s sort of like playing with samples. Seeing if layering them on top of each other works. All of us really like electronic music.”

The bands most recent release – a double A sided single called Frank/October – certainly hints that this is the case. “With Frank we wrote it saying, oh let’s make a Trap song but try and reverse it a little,” says Katie. “We could call it Trip Trap!” Katie laughs as the rest of the band scrabble to delete the interview recording from my phone. 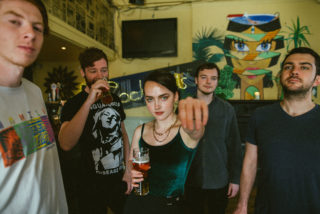 Frank’s unsettling loop is accompanied by a striking stop motion animation video by fellow Dundalk resident Tim Shearwood. “We all filmed it together,” says Katie. “The scene where the furniture stared moving, we were in this trance. We’d take a picture then everyone would move their own piece of furniture before taking another one. I think we took 1,000 photos by the end of the day. We painted the set, helped make it and edit it, so it was a really intense collaborative effort.” The overall effect is astonishing: Just Mustard and Shearwood manage to conjure up a universe inside a living room, as the track (and the characters within) spins in time with the juddering pictures. An easy reference to spot is David Lynch, who shares the bands fascination with the sub-conscious and sleep. Katie confirms his influence, saying that she loves his music and his paintings. “We much prefer the abstract surrealist take on things,” she says. “I like the looping, spinning rhythmic feel of it all.”

Even the repeated lyric – “I watch TV to fall asleep” – implies an obsession with the midnight hours. “Well, I sleep-walk and dream like crazy,” says Katie. “I love going to sleep as I just have the weirdest dreams and I have been sleepwalking since last summer. I’ve never really done it before but this last summer I was doing it all the time. I would wake up in the hallway with my cat. My dreams inspire me a lot more than my real life.”

Just Mustard played an incredible sold out show that night in Brighton before returning to the Spirit Store and Dundalk to work on new material. With their transient world of life on tour just starting, when I met them they reflected on a possible future of returning home to change. A border town where the choice isn’t just between football and music, but an ideological difference imposed by a physical border. “Yeah, Brexit would be pretty bad,” David told me. “I grew up right by the border and so it wouldn’t be nice to imagine there being a physical border again.”

“I mean, some people have their kitchen in Northern Ireland and their living room in the Republic,” says Katie. “You can cross the border on a straight road, you know what I mean.” Mete kept the vibe positive and suitably vague in these confusing times. “Let me ask you, in fact let me ask everyone, do you think it will actually happen? A lot of people are in denial, but I don’t think it will actually happen. I have a bet on it!”