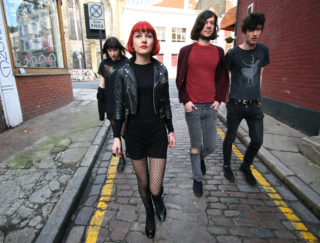 KASMs don’t like wasting time. Having formed in October 2007, the Dalston quartet were hitting East London drinking dens by November. A self released EP followed in the new year and their debut album has just been recorded in a three day blur of tribal chanting and hair-tearing feedback. For the haunting presence of front woman Rachel-Mary Callaghan, it was a natural birth – “We formed for a bit of fun,” she says now. “We had a gig to play even before we had made up any songs.”

For any other band this admission would imply a certain arrogance, but anyone who has witnessed the magnetic energy and force of a KASMs live show will profess that this attitude comes from a different place – this punk spirit is the real thing.
Inspiration lay in waiting as the band watched Get Hustle play Barden’s Boudoir. They haven’t looked back since. Rachel was joined by bassist Gemma Fleet, Scott Walker on drums and Rory Bratwell on guitar. Rory himself knew a thing or two about band life after stints with Ratt:at:agg and Test Icicles. His experience and the bands ‘give a fuck’ attitude led to a spontaneous beginning for Rachel and the group – “Our song-writing process has been very natural, from our very first practice,” says the scarlet-haired singer “so we always end up doing it quite quickly, we dive straight in there”.

And such organic fruition is reflected in the almost primal noise that comes from the small, charming frame centre stage at any KASMs show. Rachel’s vocals soar, sometimes a scream, sometimes a pitch perfect note. Already bracketed as ‘shriek-beat’ it’s an uncompromising sound but one completely comfortable in its own skin. And as everything fell into place for the band a new relationship started to form.

One of the first to notice the ramshackle beauty of KASMs were Trouble Records, putting out 7 inch ‘Taxidermy’ in time for last summer. Rachel says: “They are really sweet, it feels like they are our best friends, and they are very supportive of everything we do and we like all their projects”. And what’s not to like? Next up on Trouble’s ever-expanding list of releases are C-Bird, D-Bird and X-Bird, three women whose dark minimal sound make up An Experiment on a Bird in the Air Pump. “They are really good friends of ours too,” Rachel continues, even if her desire to be true to herself shines through when pushed on the emergence of any underground scene that KASMs are connected to. “All these bands are great and a lot of people say we are dark-wave or goth but personally I just think we are a punk band. We don’t want to be associated with any scene.”
KASMs’ fierce individuality clearly evident then, a DIY mind-set is stamped all over the next collaboration with Trouble Records also. ‘Bone You’ will be released in the new year, the single raising a few eyebrows already. “It’s self explanatory that it sounds rude,” says Rachel. “It was originally ‘I’d like to take you home’ or something boring like that, then we actually thought ‘why don’t we say I want to touch your bone?’ We just thought it’d be funny at the time.” 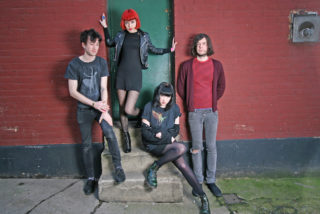 Unwilling to compromise – and thrilling for it – the band follow ‘Bone You’ with an album already in the bag. The debut was recorded in Rory’s very own studio beside Hoxton Square. Having worked with such bands as Televised Crimewave (from the ashes of Leeds trio Black Wire), S.C.U.M and Graffiti Island, his attention turned within. Just three manic days later the band defied convention getting there tapes mastered in Abbey Road. “It’s quite ridiculous as KASMs do things on the cheap,” laughs Rachel “but it was definitely nothing to do with the Beatles.”

Currently the album is untitled but KASMs’ morals remain firm. “We want it to be really hard and brutal,” enthuses Rachel. “I personally think Vom, as in Vomit, is a great name for the album” muses the enigmatic front woman. “One syllable words are good too, like ‘Bleach’.” There is even talk on the band’s much visited blog of welcoming the fans naming the record and producing the cover art, and what could be more punk rock than letting enthusiasts dictate the imagery and feel of their own beloved?

So could a band like KASMs have plans for New Year domination or even a loose schedule in mind for 2009? Erm… not a chance. “God, no I haven’t given next year any thought,” says Rachel with no eye on the clock “we have the single and the album, then hopefully play some festivals.” For a band as exciting as KASMs time has no meaning.