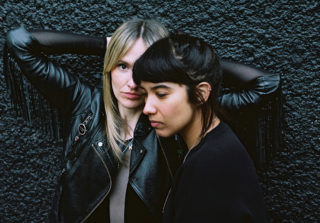 When I reach Shoreditch’s Kamio it looks as though the venue has been taken apart and is being hastily reconstructed around Kendra Frost. As amps, lighting and spools of cable are busily stacked and wheeled towards the stage, she is waiting quietly for Kite Base’s other half, Ayse Hassan, amid the bustle. Having just returned from a 25-date European tour, Frost would be forgiven for being a little jaded, but there’s no hint of that. “I’m grateful every day for this opportunity,” she later tells me with the calm wisdom of someone who has been working hard a music for over a decade. “I’m going to make the most of it.”

Suitcase in hand and band merch in tow, she has come prepared, and when an out-of-breath Hassan arrives, she declares that she herself has spent the morning working on a playlist for the night’s show. Their enthusiasm and back-to-basics determination is a reminder of why musicians do this, and, for that matter, why music journalists do this.

“One of the main starting points found in origami, a Kite Base is an opening move made with simple folds to generate a firm and fertile foundation for creativity.” So reads the helpful explanation on Kite Base’s website. But for all the geometric order of their origamic logo, Kite Base are not as neat a prospect as they may seem. With both members playing bass, their music sits defiantly at the lower end of pop music’s frequencies. And yet ‘dark’ and ‘brooding’ – descriptors that have been casually applied to them since they formed almost two years ago – do not do their sound justice. Likewise, the lazy comparisons that have been thrown around to date (Warpaint, I’ve even read Florence and the Machine) rely on gender rather than sonic resemblance. Really, this is energetic, electronic post-punk in the spirit of Killing Joke, PiL, Magazine and, yes, Siouxsie and the Banshees. If you’re looking for more modern comparisons, opt for Preoccupations and Liars.

If their sound is a fascinating one, it is also one born out of necessity. With only two sets of hands, they are restricted in what they can do in a live setting. And while they do admit to having an occasional third member – their impeccably-behaved drum machine, Alan – they are loath to rely too heavily upon laptops and pre-recorded samples. “You’re allowed to be a lot more creative because you’re not bombarded with options,” explains Frost. “You have to make things from what you have.” 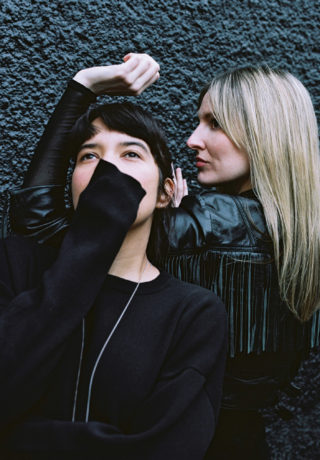 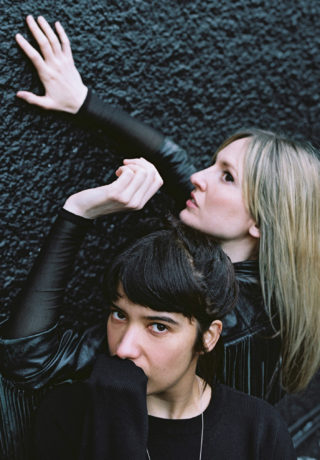 Two bass guitars also throws up the very unique possibility that the pair could cancel each other out in a mix muddier than Worthy Farm of a Monday morning in late June, forcing them to think more strategically about melody. Woven more carefully as a result, the songs on their debut album, ‘Latent Whispers’ (released in May), are richer for this constraint, with bass melodies snaking over and under each other and wrapping around Frost’s silvery vocals. Just make sure you replace your tinny earphones before you listen.

But what is it about those four strings? Hassan’s regular 9 to 5 sees her punch in as Savages’ bassist, while Frost has anchored the rhythm section in a string of bands before Kite Base. “It’s the low frequency,” says the former. “There’s something that resonates within myself, and in people in general. I was reading an article that said that people are more receptive to it – maybe it’s something to do with the heartbeat you hear when you’re in the womb.” She pauses and puts it even more simply: “Drum ‘n’ bass gets me dancing and just feeling… something!”

“It’s the best of rhythm and melody, really,” Frost says, cheerily, with the succinctness of someone who’s had the chance to answer second, and they both crumple up with laughter.

After being introduced by a mutual friend and realising that they were both bass players, everything else seemed to click into place quite for Kite Base, and when I ask if that ‘fertile foundation’ found in their paper-folding namesake can be applied to their own creative relationship I’m met with a resounding chorus of affirmation. “Yeah, and I’ll tell you why,” says Frost. “My interpretation of it, personally, was to never throw out any idea, however far-fetched or bonkers it was, because you never know what that could morph into with further investigation. And we’ve had some crackpot ideas, haven’t we?” Hassan grins and nods. “It was just a dream we had and it was a nice journey to work out how on earth it could be made true.”

Based on the shared assumption that mistakes are an inevitable part of pushing boundaries, Kite Base decided early on that risk would be a central tenet of their constitution. “It’s that idea of embracing the absurd,” agrees Hassan. “We’ve both been making music for so long that it’s exciting to try something that challenges us. And this has been such an amazing experience.” She looks at her teammate: “It’s really quite thrilling.” 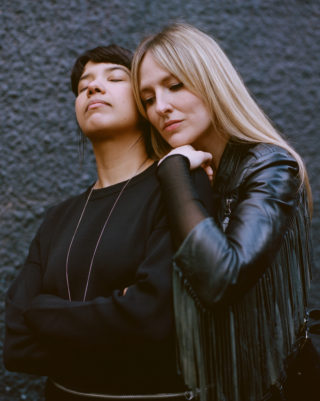 Working in a team of two can be intense in any situation, musical or otherwise, but many of the most iconic songwriting partnerships are as notable for their acrimonious breakdowns as the productive years that preceded them. Morrissey and Marr, Lennon and McCartney, Gilmour and Waters – it always seems that the more fruitful the relationship, the more spectacular its dissolution ends up being. “It’s like any relationship,” offers Hassan, before succumbing to what I learn is a trademark fit of giggles. “Actually… I’ll start again! It’s not like any relationship. We both made choices and we decided that we would make it work together.” She hands the question over to her co-conspirator as she composes herself. “We call ourselves yin and yang and it’s true – it’s the same coin but two different sides,” says Frost. “You just have to know that both of you are going after the same goal and no one’s trying to sabotage anything, so there’s nothing to get offended about.” She pauses. “Even if Ayse tells me my dress sense is awful… I’m still crying about my spandex onesie!” The infectious giggles come again.

The laughing points not only to a deep understanding between the pair, but also to a way of dealing with the world’s pressures that is very much deliberate and thought-through. Now in their early thirties, Frost and Hassan are aware of their own mental and physical limits and what it takes to keep both facets of their health in check. “I use humour and don’t take life too seriously,” says Hassan. “You have to embrace what’s in front of you and live in the moment. Ultimately if you do what makes you happy as you’re moving forward, hopefully you get to a point where you’re in a good place, physically and mentally. I make choices when I’m on tour; I don’t drink, I don’t smoke.”

As trite as it sounds, it’s nice to talk to two people who are so acutely self-aware; so unbending in their creative and personal stances. “A long time ago I decided I wasn’t going to wear make-up and if I did wear any it wouldn’t be because some photographer told me I had to,” asserts Hassan. “It was a choice that I would make, because that’s the example I want to set. I think that strength comes with age – being able to say, ‘This is who I am.’” These themes are brought to life on ‘Soothe’, a standout from their upcoming LP. A sombre yet enormously catchy anthem that is part Britpop, part gothic new wave, it as an ode to stress relief and to taking back control, whether from anxiety or from other people. As the tension builds, Frost’s vocal functions as a metaphor for the control they have achieved in terms of their identity and, as far as is possible, their mental health.

They both try to run and hit the gym as much as the limited time and space of a tour allows, but the reaction from others isn’t always understanding. “A lot of people respond quite funnily. It tends to be a lot of the younger bands who are getting pissed and they’ll ask if you’re not drinking. And I’m drinking my matcha green tea.” Quick to point out that she by no means sees it as the a one-size-fits-all solution, Hassan is nonetheless firm in her beliefs. “It’s very hard not to sound self-righteous and it’s just choices that I’ve made… for me. I would be dead; if I started taking drugs and stuff, I wouldn’t be here.”

But while matcha green tea and cardio have been lifelines, laughter has been the ultimate saviour when moments of need cropped up on tour. “To have Ayse creasing up with laughter about something that I would ordinarily be quite stressed about is so infectious,” smiles Frost. “We spent a lot of time in hysterics on tour. It’s such a relief to have a different way of letting go of stress.”