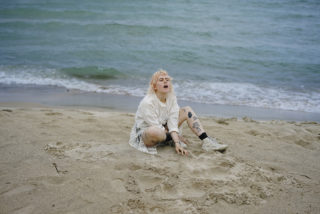 ‘The Lamb’ initially seems to be a misplaced title for Lala Lala’s second album. Lillie West, the London born musician behind the nom de plume, is fraught with insecurity and a fierce drive for self-improvement. Her churning lo-fi guitar, searing lyrics and deadpan vocals nonetheless prove that she’s no one’s victim or Christian stereotype of the sacrificial ruminant.

“The album was me writing about and thinking about how to be a person again,” she clarifies down the line from her home in Chicago, where she’s holed up during a break from her current tour with Wolf Parade. “It was like I was a baby sheep learning how to walk, figuring out what my life was going to be like after being sober. Because it felt like so much of my identity was drinking and I really had to readjust and change everything.”

It’s a period of recovery that’s knitted into the fabric of the 12 tracks that comprise the album, which is her first to be released on Sub Pop’s Hardly Art imprint. Her new-found sobriety was severely tested when she suffered bereavement and a break-in that left her with “periods of utter paranoia.” As a result of this she was “afraid to leave my house” and spent the hours trapped inside writing.

These experiences are ever-present in the recurring images of violence and self-doubt but ‘The Lamb’ also strives for a better version of West. As she sings on the new wave DIY of ‘Water Over Sex’, a song that was inspired by her love of St. Vincent: “You think I’m good / I want to be gooder.”

“I guess it’s a thing that everyone feels,” she notes of the sentiment, pausing to cough and sniff with the cold she picked up on a plane home from Malaysia. “I would like to feel like I belong where I am.” 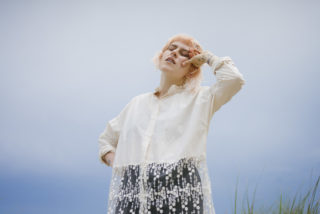 It’s a sense of belonging that she still doesn’t feel in the music industry despite enrolling at the School Of The Art Institute of Chicago, self-releasing her debut album, ‘Sleepyhead’, in 2016, and booking her own tours across the States having been inspired by the local DIY music community.

“I always feel like I’m not good enough in music, particularly at performing,” she demurs. “I really like writing and recording music – I like it so much – and I feel that to a certain extent I’m able to do what I want with it. But performing I often feel insufficient and that it’s not quite right or something. I also feel that I haven’t locked in exactly what I want to write or what I should be.”

There’s a fine line between this critical self-abasement and a healthy drive to improve. On the basis of ‘The Lamb’, Lala Lala has certainly made great progress. Where her debut was firmly rooted in grunge, its follow up finds the metaphorical lamb trying on wolves’ clothing styled in new wave, dream-pop and tinny synths.

“I was really into the local garage scene in Chicago when I made ‘Sleepyhead’,” she says, “but also I think it was also just about what I could do. I didn’t really know how to do anything, I just wanted to be on stage.”

Armed with greater musical know-how, her widened palate of influences help to deliver sonic and emotional waves of light and shade. “I really like dynamics and so I try and write them into songs,” she explains. “I also tried to write them into the record so it isn’t like one feeling, one volume the whole time. I don’t want all of the instruments to be playing at the same time throughout the whole record. That would just be a wash.”

This increased use of dynamics is a major step-change from her debut. “I was barely present, barely conscious for ‘Sleepyhead’, and I didn’t think about it in terms of a record at all, it was more just ‘well we should record something.’

“Now I think about songs for a lot longer to decide if I want to keep playing them or if they make the cut. There are a couple of songs on ‘Sleepyhead’ that I didn’t think about at all, that were just written, and that wouldn’t necessarily have made it onto the album if I did it again. And ‘The Lamb’, I just thought about what I was writing about and what I wanted it to sound like and that kind of thing.”

She attributes this greater awareness and the change in mindset to getting sober. One of her initial motivations for starting the band was the desire to “say something or work through something” that she was unable to verbalise in person. After she quit drinking and drugging, however, she found “there isn’t that much that I feel I can’t say.” This has enabled “music [to] became the full thing, the incentive and the focus for everything else.”

The confessional nature of ‘Sleepyhead’ resulted in acerbic lyrics aimed at both herself and the people around her. As she sings on the melodic scuzz of ‘Fuck With Your Friends’, ‘I drink more than I want to / Cos it makes you easier to talk to / And what you’re saying is boring.’ 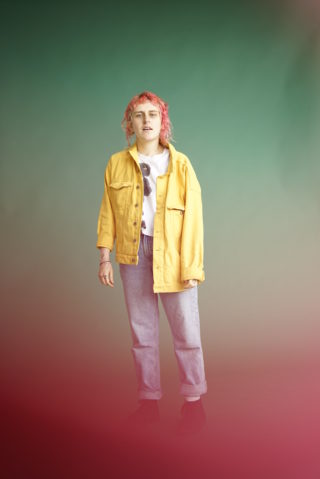 Despite this she initially denies that there’s been any fall-out from people recognising themselves or certain situations in her lyrics. “I usually try, especially now, to disguise what I’m saying a little bit,” she says. After a brief pause, however, she admits that, “it has happened once where I hurt someone through a song,” although she won’t be drawn on the details. “I actually can’t say because then they will also see this!” she laughs.

The lyrics on this album remain personal, despite her best efforts to “try and disguise stuff.” This balance between individual and universal is evident on ‘Dove’, one of the standout tracks. More spacious than other songs, it sounds like the postscript to Waxahatchee’s ‘Ivy Tripp’ and addresses the accidental overdose of her friend Trey Gruber, frontman of Chicago band Parent.

The track itself was arranged with bassist Emily Kempf and drummer Ben Leach – who complete the current live incarnation of her band – but the final version is the result of gradual subtraction. “We took a lot away. It sounded better with less,” she admits.

It’s an evolution of sound that she’s keen to continue on her next record, which she’s already excited about writing. “I don’t want to become trapped by a genre or something. As much as I write like myself I don’t want people to expect the record that comes after ‘The Lamb’ to sound like ‘The Lamb 2.0’ or something.”

This album is good; its follow up will be gooder.