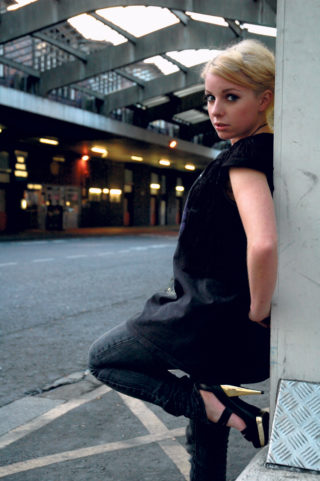 Bringing disco back to life

A quick word from the Blackpool tourist board: “Don’t go there, it’s horrible. I’ve only ever been to Blackpool, Morecambe and Brighton, and Morecambe is even worse than Blackpool, maybe. If you got Brighton and put it in a nightmare, that’d be Blackpool. It’s all the same stuff – the pier and all the guest houses – but put in a nightmare with drunks, fights, hen parties and dirt… but it is good.” Dear, fetch me the AMEX, I’m booking us a getaway.

For legality’s sake, we should state now that of course the Blackpool authorities would never be this bold and/or honest. But that doesn’t mean that Victoria Hesketh – aka electro sensation Little Boots – needn’t be loose-tongued when talking of her hometown. Now she lives a stones-throw from the Shoreditch bar we meet in, over 200 miles from the seaside mecca she holds a begrudging respect for, much like most coastal deserters – “I suppose it has influenced me a lot,” says the petite musician “and you don’t forget where you come from, or how different it is from down here.”

Having met Little Boots twice before, her mini frame should no longer alarm me. But something in the promo shots of her previous gal pop trio, Dead Disco, had me and others thinking that Miss Hesketh towered above her 5ft 2”; her jet black, slack curls giving off a touch of the leggy Kate Jacksons about them, at a time when we were clinging to The Long Blondes as the resurrectors of Brit Pop. But Dead Disco – running out of Leeds – were never much about revisiting Pulp’s urban, decadent indie. Giddy and stratospheric (see what we’ve done there?) their lusty compositions were, but tracks like ‘You’re Out’ came on all together more vampish and stalking than the Blondes.

In hindsight, perhaps it was ‘City Place’ that alluded to the end of Dead Disco and start of Little Boots for Hesketh the most. More Girls Aloud than ‘Girlfriend In A Coma’, it was Dead Disco doing straight up pop, and rather brilliantly.

“When you’re in a band it takes on it’s own personality,” says Hesketh now “it’s a bit of all of you but it’s none of you totally.”

Talking about her split from her former group is, understandably, not Little Boots’ favourite thing in the world.

“At the time, [leaving] was the hardest things I’d ever done,” she says. “I’d been thinking about it for quite a long time but would always say ‘no, I want to stay, I love my band’. It was the most important thing to me so I was really upset about leaving. I didn’t want to at the time but now I know it’s the best thing I could’ve done, for me. We were so in it together so it was really hard. There’s a lot of reasons behind it all, which I don’t really want to go into, but I think a big thing was that we wanted to go different ways musically. I wanted to go more pop and electronics and they wanted to be more guitar-y and band-y. We’d done a lot of gigging and towards the end I’d stopped enjoying the gigs, which is what I really lived for.”

In December of last year, a pre-Little Boots Victoria Hesketh made our Humans Of The Year list for “making Debbie Harry, circa 1977, look as sexy as a bag of shit”. This rather boyish accolade, we’re sure, has little to do with Little Boots’ current barnet, but nevertheless out are the dark tousles and in is a short platinum do, platted, in places, tightly to the singers scalp.

She has free reign on everything she does these days, justifying her split from Dead Disco alone.

“I do pretty much everything,” she grins “and it’s really liberating. There’s a lot more pressure, but it’s really exciting, because I’m totally myself now. I can do whatever I want to creatively.”

Being a classically trained pianist no doubt helps where such responsibilities lie, and having a keen interest in music’s technological advances. But, all in all, what Little Boots wants to create is simply pop music.

“I’d like people to think of it as imaginative pop,” she ponders “like quirky, English electronic pop music. I’m not really interested in doing a cool thing or an indie thing. If people want to call it that then fine, but I’m not trying for that. Making pop music is really challenging for me, which is why I do it. And I’ve not got any excuses for it. Pop’s coming back now and it’s a bit cool with people all saying ‘oh, I write pop songs’ but it’s always still a bit indie and a bit crazy. And I don’t have any excuses to make for pop music, personally. I love it and don’t think you should have to say it’s wonky pop or indie pop, or something cooler.”

And as a fan of “big choruses, otherwise I lose interest”, Little Boots intends to develop her fledgling live shows into a scaled down Smash Hits Poll Winners Party. Think Kylie’s Showgirl Tour, only in Notting Hill Arts Club, for now at least.

“I want to do the opposite to your average guitars, drums, indie set up really, cos I’m just bored of that. And I’ve seen a lot of solo acts who’ll just hire a session band that look a bit indie to make them look cool. It’s just really soulless. I’m really interested in technology. Electro music is still a bit of a mystery to a lot of people I think. They think that it just involves computers and synths and lots of buttons, and no one knows what happens, but then you see a band like Hot Chip live, and they don’t have a drummer or anything but there’s so much energy and they produce a lot of it live. We’re going to have visuals too that are quite spacey and disco-y. I just want it to be a real ambitious pop show.”

If you didn’t know it was true you’d not believe that all of the attention currently gained by Little Boots has, to date, only manifested itself in one extremely limited release – the 300 vinyl pressings of the squelching, heart-fooling ‘Meddle’. But behind the scenes – in between features in Dazed and live reviews in NME – Little Boots is planning an attack on the charts for 2009. And judging by those arming her arsenal, I know what side I’d like to find myself on.

Those that have gotten involved so far include Diplo, Heartbreak, Simian Mobile Disco, Joseph Capriati of Hot Chip – who has continued to work with Little Boots via email since producing ‘Meddle’ – and Ladyhawke chief collaborator Pascal Gabriel. Chuck an Epworth at that and you could call “full house” on a game of super producer Texas Holdem.