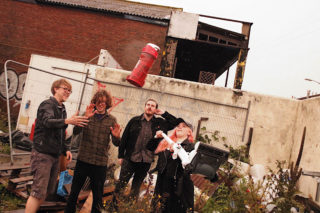 Formed in Brighton but with a singer driven to Scotland by Brexit, the foursome can still make heavy "party music"

Glasgow, Scotland: a city that’s synonymous with vibrant creativity like no other in the UK, particularly during the epoch of post-punk and indie pop in the early ’80s, many bands of which still continue to influence an innumerable amount of groups all over the world.

Indeed, when you talk to anyone about Glasgow’s music scene there’s always an obvious affinity for the city. Lower Slaughter are based in both Brighton and Glasgow (vocalist Sinead lives and works in the latter), which is of particular interest to me having been born in Brighton – a place that has its respective merits as a flourishing musical hub – and now residing in Glasgow for no reason other than its music scene being one of my favourite in the world. In terms of DIY infrastructures that help to nurture and support new acts, you couldn’t get a better mix of two cities.

I bring this up with Sinead to make sure that I don’t just have an idealised vision of Glasgow as a musical utopia, and I’m relieved to hear that she agrees wholeheartedly: “Yeah, I totally agree. It’s a really special community to be a part of. I can’t tell specifically what factors make it so special, as there’s an innumerable amount to draw into it. It has a strong sense of community and less pretension than some other places. It’s a supportive place to work on new ideas and it’s more about what you do and who you are than what you look like. It’s a very friendly city, with an abundance of good venues, and it’s also a very cheap place to live, which definitely supports the DIY lifestyle. The community is thriving and has been for decades, which feeds into the energy of newcomers to the scene.”

Despite one third of Lower Slaughter living in Glasgow, the distance doesn’t get in the way of being a band as much as you would think. In fact, the band use it to their advantage. “We recorded our album just before Sinead moved so that wasn’t too much of an issue,” explains bassist Wakefield. “Sinead being so far from the rest of us does make practicing trickier, but it also makes everything much more special, because it just ends up being a bunch of pals catching up and getting together after some time apart. The rest of us work on the music pretty much weekly, and the beauty of the Internet Age means that we can send over our new workings to Sinead for her to work on the songs in her own time. The distance makes us pickier on when and where we place, too, which isn’t necessarily a bad thing.”

Lower Slaughter’s debut album, ‘What Big Eyes’ (released September 15th on Box Records), is testament to a welcomed theme that’s become endemic in recent times: eschewing the tamer aspects of indie and punk and dealing in something much angrier – no doubt thanks to the current political climate that has contributed to a new wave of bands being more lyrically political and musically noisier. I ask Barney whether this shift is simply a coincidence, and he’s quick to dismiss the idea of them being an angry band at all, even they do riff like Nirvana and Pissed Jeans. “We get called angry loads,” he says, “and I never understand it. We’re just loud – that’s as far as it goes. I see our music as party music, really.”  “Like, fair enough, my voice has some grit in it,” says Sinead, “but at the same time it’s on the same trajectory as what many male singers have presented before. It doesn’t seem that people are as interested in commenting on their ‘inner rage’ of whatever. 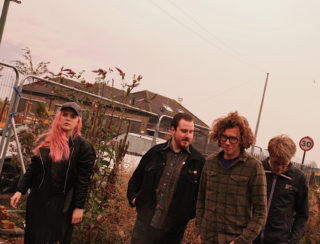 “With regards to politics, it’s a trip – for sure. There are a couple of tracks on the album about our current (nightmarish) political climate. Brexit broke my heart and influenced my move back to Scotland.”

I refer back to what Sinead said about the glaring and unfair contrasts between the narrative on men and women involved in punk music. We talk about our mutual hatred of the way in which people in general like to emphasise and exaggerate the differences between men and women in bands, and agree that a lot of the time it’s done subconsciously. “I’m confused by people commenting on me being angry,” she says, “as if punk never existed and there are no men shouting at strangers in bands. Performing is just that – performing, and we all bring different things to the stage when we get there. The music is big and riffy, and the delivery of my vocals are just part of that big sound. I find this subtle, pervasive, misogynistic bullshit frustrating, but I mostly ignore it all so I can keep going on with my day!”  Sinead joined Lower Slaughter late last year and I ask the band if her contribution has had much impact on their music: “Definitely!” said Barney. “Both lyrically and musically. Sinead joining made us explore new musical avenues and up our game. We can be more diverse with Sinead’s vocals and lyrics.”

I mention the darkness of Sinead’s lyrics – themes that are dealt with with literate proficiency and informed by ‘nerdy’ influences (Sinead’s words, not mine). “The lyrics are definitely darker since I joined,” she says. “I suppose that’s partly my response to the music, and what kind of imagery it conjures up for me. I’m a big fan of sci-fi and medieval fantasy, which informs some of the language I use. But overall the subjects are drawn from real life; my emotions and the world I live in”.

Our interview takes a darker turn as we discuss the grievances of mental illness and the impact it has on our own productiveness and creativity, specifically in relation to writing and being in bands. A track on the album called ‘Abyss’ – a favourite of the band’s because of its dynamic approach to conveying myriad styles that symbolise their collective influences – took Sinead considerably longer to write because she was in the midst of a deep depression, which naturally heightens the impact of the song. Having experienced depression myself and knowing first hand the difficulties of writing meaningful sentences when even the simplest tasks seem impossible, I was interested to find out more about Sinead’s approach to song writing during times of hardship. “It took about three months,” she says. “It was mad. It usually takes me a practice or two to finish a song. But I was glad to have persevered. I was so grateful when I had finished it. I can be quite a solitary person at times and particularly so when I feel down or depressed. Tour can be difficult because it’s ALL THE PEOPLE ALL THE TIME, but I just love playing so much that it’s totally worth it. The guys are so incredibly supportive, too, which is more than I could ask for.”   When we start talking about what ‘punk’ means to people these days, I suggest that there’s still this argument – made mostly by the kind of music fans of a certain age who refuse to seek out anything new – that punk/guitar music is in crisis. 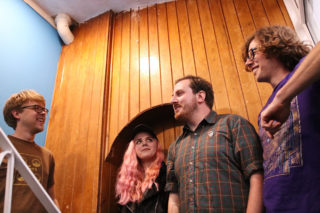 “I disagree, obviously,” says Barney. “There’s all sorts of music being made everywhere. I’m never short of gigs to go to, so I’m not sure where that argument comes from. I just think it’s a case of back-in-the-day syndrome.”

Next for Lower Slaughter are a couple of launch shows for the album in September. “We picked some of our favourite bands to play like Public Transport,” says Barney, “which is a new band featuring members of Working Man Noise who we’ve toured with a couple of times. Luminous Bodies were confirmed today. Then we’re touring the North of England and Scotland in November, briefly. We’re also about halfway through writing the new album, so we’ve no desire to slow down any time soon.”

Earlier on in the interview I realised that Sinead and I had chatted previously. She works at a venue in Glasgow called The Old Hairdressers and I had been in touch to enquire about promoting a gig there. I’m digressing, but this says a lot about the togetherness and sufficiently small world of the UK’s DIY music scenes.

Lower Slaughter are a welcomed antidote to the bands that have nothing important to say, and the fans that thought British hardcore punk was on its knees. They shout, but they aren’t angry – they just want to be heard, like the rest of us still suffering from post-Brexit dejection. And as long as we have our local music scenes that thrive in the face of austerity, everything will seem OK. 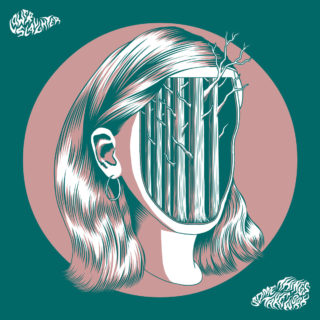