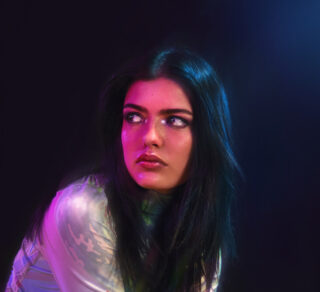 South London-born, raised and still based, Yunè Pinku is one of dance music’s most understated and nonconformist newcomers. Taking her stage name from ‘yunè’, a nickname she had as a child which translates from Japanese to English as ‘cloudy’, and ‘pinku’, a surname that nods to claymation icon Pingu, her approach to dance music is upbeat and unconventional, and an amalgamation of an array of cultural and sonic influences. As a teenager she had a self-proclaimed love for ’70s and ’80s guitar music le like the Bee Gees, The Kinks and Joni Mitchell, and, with her skater sister, aligned with punk and indie subcultures.

The inception of Yunè Pinku can be traced back to the ‘weird soundscapes’ which the half-Malaysian, half-Irish producer would make in her bedroom from samples of post-war radio broadcasts, which over the last four years have become more sophisticated in their production and arrangements as she refined her skills as an artist. Her singing voice only started to become a feature of her tracks three years into this process.

“I wouldn’t really listen to electronic music, but I found [that] working with electronic gear, it’s easier to create otherworldly things,” she says about what drew her to the genre in the first place. “Electronic sounds feel really familiar in a lot of ways.”

Ever since she started making music, Yunè has been very much an artist placing herself beyond a specific genre within the scene. Her debut EP, Bluff, was released earlier this year, and is a thrilling, experimental and unorthodox mix of UK garage, post-dubstep, house, and dance music genres beyond that. Last year she collaborated with Sydney-born, Berlin-based Logic1000 for the compelling, syrupy dancefloor-smooth groove ‘What You Like’, and has a fan in UK club titan Joy Orbison, who invited her to contribute a guest mix to his recent BBC Radio 1 residency.

As an artist who didn’t grow up around electronic music or adjacent scenes, Yunè never had a vision for what her journey into music would look like. She explains: “Because I’m still quite new to listening to a lot of electronic stuff, I’m still discovering the differences between all the different genres in electronic. In terms of me making it, it’s more [about] making stuff when you’re in it, you’re in the music properly, you’re in this world that’s created by the music. That’s how I listen to music, so I think it’s quite similar to how I make it.”

She’s slowly racking up a fanbase within and beyond London club culture, playing sessions and performing her first live show at Bermondsey Social Club (which she did by herself and describes as her proudest career moment so far), yet Yunè still doesn’t feel part of the scene around the genres she’s working with.

“I’m probably one of the furthest people from it,” she laughs. “I really can’t deal with raving, I’m really quite bad at it. I prefer being the DJ than the attendee.”

Though she may not feel part of the scene quite yet, her love for the genre and its limitless possibilities is palpable. “It’s a really unifying kind of music,” she says. “You can have people in their 50s and then someone who is 13 listening to the same song, and they could both dance to it. As a genre it’s a relief from more serious stuff a lot of the time. If you’re not particularly listening to the lyrics, it’s just fun energy.”

She continues: “[Electronic music] is definitely a release and an escape for me. I think it’s nice to share your music with other people as well. Whenever one of my mates shows me a song they’ve been working on and they’re really proud of it, it’s nice to listen to it. It’s nice to lock yourself away for a bit [too] and just make something.”

With no parameters in sight, what’s next on the horizon for Yunè? “I think I’d like to get going with doing a proper physical album,” she says. “[As well as] fine tuning the live [set], and fine-tuning where everything already is.”