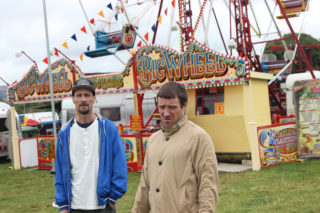 Subtlety might not be Sleaford Mods’ greatest and most commonly attributed asset. Their approach is brusque, to say the least, and at its most fierce a full-on head-butt to the nose with a swift follow-up of a glass across the skull. Anger, animosity and venom is their bread and butter. However, they are also a group not to be underestimated and simply viewed and absorbed at surface level. To see Sleaford Mods live is to witness a seething manifestation of something that bubbles within all too many of us. Vocalist Jason Williamson spews, shouts and barks into the microphone with not a shred of inauthenticity. This is not just the incoherent ramblings of a man railing against the so called ‘system’; there is a fluidity and precision that illuminates a truly talented vocalist as clearly as it does a disgruntled citizen of this country.

Andrew Fearn, the other half of the Nottingham-based group, is responsible for the music, usually comprised of some form of a chugging, spitting beat that switches genres from song to song, from jungle to grime, hip-hop to gritty punk lo-fi. Together they have forged a bewildering but beguiling concoction, as Fearn tells me, sitting at Beacons Festival 2014, held on England’s Yorkshire Dales.

“We were a happy accident,” he says. “I was playing some beats at this night that was mainly a fairly motley crew of noise fans. They didn’t really like what I was playing, they would ignore me, it was just that the guy who put the night on was my mate, so I was like, ‘sod you lot, I’m just going to play my beats’, and then he [Jason] was like, ‘oh, I like your beats’. It really was two things just slapped together. Then we found similarities between us as friends as well as differences, and it was those things that made it work.”

Williamson says of the meeting: “When I first met him he was playing this brilliant music and looking nonplussed. It was a winner.”

The ‘voice of the working class’ is a label thrust upon Sleaford Mods as frequently as the usual suspects of comparisons are (John Cooper Clarke, The Fall and so on). “I couldn’t name one album by The Fall. Rein ya black heavy knit sweaters in you fuckin fossils.” So Tweeted Sleaford Mods recently.

If Sleaford Mods do represent anything, though, it’s perhaps the fact that there is no collective voice of the working class, right now. They represent, and project, the disparity, the fractured nature of Britain and the shattered ideal that there is a communal underbelly waiting to revolt. Fearn says: “British people don’t challenge the government enough; they don’t stick together enough against the Government, unlike a lot of other European countries.”

The daily slog of working life forms a great deal of the essence of their songs, yet this is hardly something the group are keen to promote either, as Williamson points out, “I’m careful not to get so proud of that, because why would I want to be proud of fucking getting up everyday and going to work? It’s fucking shit, I’ve done it all my life and it’s a bag of shit.”

From October 2014, they’ll be professional musicians, although leaving behind the guts of Williamson’s lyrical inspiration is not something that concerns him. “Just because you leave work… I mean there’s lots of depression in everything,” he says, “you just hone in on something else. Also,” he reasons, “you can’t base your continual output on the same subject all the time.

“But [giving up work for music] is worrying because you’ve got to pay the bills, so there’s always that temptation to accept the payroll, which I don’t want to do at all, so it’s trying to find a way of keeping us as contained as we are now. I’m aware of the fact that people find us interesting at the moment because it’s a breath of fresh air, but when that passes with the mainstream media, which it fucking will, it’s like, how do you keep making your lolly?”

There’s a harmonious personality clash between Williamson and Fearn. The former is gnarly, tough and feisty, with the latter relaxed, jovial and stoner-like. Both are loquacious, funny and likeable, but their opposing traits are clear foundations for their successful musical pairing. Williamson is an ex-Mod. “I take the bitter essence of it,” he says, “which is what people seem to forget is what makes a Mod. It’s the bitter essence of it – anything else that dresses it up is dog shit; it’s usually spurred on by consumerism and somebody else making money out of it. That’s why I had a go at Miles Kane (Kane complimented the band on Twitter to which the Mods replied, ‘This music was born out of a hate for pretenders like you. You can either leave gracefully or I will block you’). He’s shit; he’s absolutely fucking terrible. More magazines kept approaching me and saying, ‘let’s talk about that’, and I don’t want to turn it into a witch-hunt. I just don’t think he’s a mod – he’s not a mod, of course he’s fucking not. You’ve got this stereotype, this plastic other that people shove out – take the stereotypical example of a page three women – and they shove that out like that’s what it’s about, but it’s not. That’s not what life is… Mod means something different to me. Take someone like Paul Weller – he’ll probably say that it means beat music or soul music, sharp dressing or this that or the other but to me it means that, in a little respect, but it also means something different, something street, something gnarly, something pure.”

“Nothing at all, because he knows I’m fucking right. Either that or he’s dead hard and he’s going to clump me one night.”

Fearn’s background is more rooted in the glory days of Nottingham. “Nineties Nottingham was like Portlandia,” he says. “It really was. It was normal to pierce your penis and so on; it was cool to be unemployed; it was the time to drop out and I was completely one of those people that slipped through the net.”

Musically, however, it’s been more electronic and hip-hop experimentations. “I’ve been an electronic musician all my life, since I was sixteen, trying to make a cool Aphex Twin album or something, or something popular in that field, and it’s come in dribs and drabs but it’s never really happened, so I suppose, in a way, nobody making that kind of music has ever come forward and started working with somebody like Jason…

“I think with genres there comes a comfort and a security,” he continues. “When you work within a specific genre you kind of already know if it’s going to be popular and you know who it’s going to appeal to and those certain people will be convinced by it. It’s braver to go out there and do something different.”

The invigorating element of Sleaford Mods – and what personally attracts me to this group so much – is that nobody is out of the aim of their crosshairs. Everyone is a target and nobody is safe, from the EDL to Eno; Sonic Youth fans to football hooligans; Lou Reed to Kasabian; politicians to police officers; drug dealers to Chumbawumba. This is not because they project a sociopathic hatred towards all and anyone but because they hit home the all too forgotten realisation that we’re all culpable. It’s music that offers us a grimy, drug-smeared mirror to our faces – we’re all culpable cunts in the world of Sleaford Mods.

We often seek comfort, familiarity and reassurance in the music we listen to, be it stylistically or lyrically, but the Mods don’t allow you to side with them because to pledge unadulterated allegiance to Sleaford Mods would be to miss the point entirely.

“The opposite music to us is like Balearic rhythms,” observes Fearn. “That music is like some therapy, which is a valid point – sombre music or ambient music can be a spiritual thing for some people, but this is a conscious thing. That’s the difference, it’s a conscious world and this conscious world of music has become so bland and irrelevant.”

Williamson happily acknowledges that not everyone is going to get it.

“People [often don’t like it] when they are confronted with something that is unashamedly itself,” he says. “It’s not trying to be something else; there’s no pretence, there’s no cover up. We are quite coarse, and I think people can be offended by it – it’s because it is just that. Like, ‘well, why is he like that’ and it’s because some people fucking care, they are actually pissed off… It’s [the music industry] very fickle and people say we’re a band of the moment and I suppose we are but a lot of the best bands I’ve liked have been born out of the moment, the reaction to the environment around them.”

During a time in which any discernible sign of British youth culture seems embedded in pretending it’s the 1990s and it’s in America, there is something refreshing about the Mods, as bleak a reminder as it can often be. Sleaford Mods are the scattered chicken bones, the puddles of piss and the gloopy piles of puke that line and flood the city streets every Sunday morning. They are a grim reminder of the detrimental existence of humans as a whole – our collective, negligent impact we all have. Nobody wants to look at it but sometimes you need to.