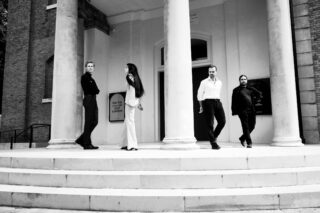 A week before the first week of sun this year, the overground is flooded. Modern Woman are playing Hackney’s Moth Club, supporting The Deep. The venue’s trademark golden curtain is gone, the stage now dressed in ocean regalia. A salt water candle séance lines cardboard flats of buttresses coming to life and doing the Argentine tango. Schools of pink fish with monstrous grins shell the curtains. Upstairs, Modern Woman sit around the edges of the dressing room, a treasure-chest table holding a vegan feast in brown paper bags, with some over-salted chips. A blow-up unicorn, whose popularity boomed with those pictures of the England football team’s training camp, sits ceremoniously next to them. It’s not theirs.

Sophie has just arrived from Wales – a few days at a hidden lake in Snowdonia, where her mum had a caravan in the ’70s; Adam has recently narrowly avoided a Covid ping, which nulled the band’s ability to rehearse – although rehearsal only really brings confidence, they tell me, not finesse. A matinee show has just finished and gone well, all things considered. It’s a band that has gone through a few line-ups and moving parts, but in their current form they look eager and composed. Sophie is a natural frontperson, with a soft South Manchester accent – one her Dad always said was lazy, dropping its Ts – while the band of David (violin, table), Juan (bass) and Adam (drums) sits around her.

“I really like a matinee,” she says. “I hope it continues. Although, I think there are a lot of people who can’t make these shows. People that watch matinees at the theatre are a very different audience to ours. I like the idea of playing throughout the day, though. The band is a day thing. It occupies your mind at all times, so gigs shouldn’t be any different.”

Modern Woman were a late addition to the line-up here. Their music is hard to grip: their debut single, ‘Offerings’, is narrative post-folk-come-art-rock, creepy in its intentions, voyeuristic, animalistic and completely engaging. They’re both off-shoots of the south London DIY scene and its complete antithesis at once. The internal dialogues and squeaking sax of Gen Z’s sonic revolutionaries has thudded an old soul, were Joni Mitchell to meet Talking Heads playing symphonic metal and drone ambient. Sophie’s lyrics are articulately primitive, indebted to literature, ecology, folk horror and English mythology, and so is the concentrated theatrical fusion of analogue sound around her. 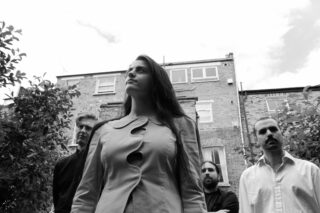 “It’s a big stage,” Sophie grins, visibly excited to be playing the Moth Club for the first time, “but I couldn’t see anyone. At [pivotal south London venue] the Windmill, you can see everyone. I like to see people in the crowd so I can sing to them or speak to them, or have something to latch onto.”

“I’m exactly the same,” says David. “When you can see people react to what you’re doing, it helps you feel like you’re performing to them, not just doing a thing.”

“To be fair, for most gigs it feels like I’m playing to the spaceship from Close Encounters,” says Adam, whose hands and drumsticks made at least one appearance in the spotlight peripheries during the matinee show. “It’s normally just a mass of lights staring me down.”

“We’ve got this thing with Adam,” Sophie explains, “I don’t think he’s ever been in the live shot. He’s either completely in the darkness or I’m in the way or –”

“You know at the end of Monsters Inc.?” he interjects. “I’ve got Mike Wazowski syndrome. There’s always something just slightly blocking my face.”

Sophie runs through some examples, drawing particular attention to a photograph from a show at London’s Shacklewell Arms, where there’s no obvious obstruction to his face or drum kit, but still, somehow, he’s not there. It’s as if he took an early cigarette break before the set ended, or was never playing at all.

“Is it a drummer thing or a you thing?” David probes.

“I think it starts as a drummer thing, but now it’s just a thing thing. I’ve invited friends down before, specifically to take pictures of me, and even those bastards can’t do it.” Maybe it’s a blessing, he says: “We had the amazing opportunity to do the End of the Road live stream and I had a camera right next to me for that. We watched it back and maybe there’s a good reason why people leave me out of the shot. It looks like I did that whole set cross eyed.”

“Recently I feel like you’ve been looking up more to us,” says Juan, supportively. “It’s good. You’re making eye contact more in shows now. I think you look cool.”

“That live stream was so nice, though,” says Sophie, reminiscing back to last September, where the band joined The Golden Dregs, Katy J Pearson, Billy Nomates and Squid in End of the Road Festival’s ‘Garden of Streaming’, live from the famous domed Singing Theatre of the festival’s site. The band’s live show was so captivating that it even made the festival set up a record label for the sole purpose of releasing their first single.

“Playing on a stage like that… that was a proper stage. It was the best stage I’ve ever seen in my life. I’ve actually never been to End of the Road,” Sophie continues, slightly embarrassed. “But the live stream was incredible, even if Adam was being very dramatic. A wasp stung his finger just before we played, and he was like –”

“Woah, hang on, how about the person who got stung tells the story?” He spreads his arms melodramatically; the lights fade in the dressing room; we’re in Adam’s world now. “I was doing a stellar job of just sitting on my arse while everyone else was setting up, and this wasp came out of nowhere. I had this searing pain in my little finger, and immediately it started to swell up. Now, drumming, you need your fingers to curl and the bastard just didn’t. My finger just stuck like that.” He imitates his finger staying obstinately straight.

“Is that the scar?” jabs Sophie.

“That’s a freckle. But actually for the sake of this… yeah, that’s the scar. That’s the big scar that the wasp… the hornet… the Japanese murder hornet left me with, and shot my mum. All I did was ask for some antihistamines to stop the swelling, and now it’s somehow evolved into this story of me crying, bleeding out and crawling towards the sound guy begging for help.”

Sophie laughs. “If you watch back the set closely, you can see the wasp flying around Adam’s head; he spends half the time trying to subtly wave it away.”

“It looks like I’m trying to do really shit stick tricks. I’m not flipping anything, I’m just…” Again, he imitates a kind of puerile celebration, raising one drumstick limply in the air.

“I wrote a lot of these songs prior to the band formation,” says Sophie, aware that a quick internet search paints them as a new band with one song; more are coming. “I knew that it needed to be a band from the start but it’s really difficult to find the right people who complement the songs. I knew we needed to have violin, so I contacted my friend who suggested David. We met up in a pub in Camden – what’s it called? – the folk pub with all the instruments on the wall – sorry, but what a place. Did you suggest that or did I?”

“Anyway, I felt a real connection. David’s a composer in his own right and we had a lot of interests in common – folk horror films, literature, and some music as well. David scores a lot of horror films.”

“Well, a few films,” he says. “I like horror films and my ambition is to score horror films. But I’ve only had a few here and there.”

“I think we were both drawn to that wooden, primeval feeling,” Sophie says. “You know, bringing things down from being very heavy and intense, together with the folk vocal. That was something I was always very interested in doing as a project. I feel like David made me really excited, and we became really excited together, especially about having a table.”

The table might be the secret to Modern Woman’s intrigue – positioned at the front right of the stage (here, behind a cardboard wave), it’s operated with a childish academia and wonder. David found it on his street, and decided to take it with him, minus the legs. “We always talked about having a table where there are loads of things screwed in,” he explains, “chimes dangling off, strings, smashing it with drumsticks – it’s a work in progress – it had a toy piano on it at one stage.”

“Well, it’s a metal ball with holes in it which David screwed to the table and it sounds great.”

“With the traditional drum kit, everything’s designed to sound good, to sound clean. When you hit a drum skin it oscillates for a long time and fills space in a really economical way. The percussion table is kind of exactly the opposite, because everything’s smashed up. It sounds really dull,” says David. “The cymbals don’t really resonate anymore and the colander is a short, metallic sound. I can just slot in with these very transient sounds.”

“It was really important for me to have this differentiator to traditional punk,” says Sophie, excited to share more of their curdling heavy folk music. Where Tom Waits famously worried that his percussion would sound like Buddy Rich having a seizure – like a train wreck – Modern Woman are buying the steel clippers to cut the railroad track. “There’s been a long time where I’ve been doing it alone,” says Sophie, “and trying to explain that sound was always a difficult thing.”

‘Offerings’ is an anomaly on the debut EP, out on End of the Road Records, although its primeval, animalistic core is explored throughout, with more songs that strip away an exterior to greet desire quite earnestly. The songs are Sophie’s, embellished by a band with the freedom to express itself creatively, free from trend. “With this lineup, everyone knows what fits,” Sophie adds. “Everyone knows when to step back and leave space. They know when it needs to be loud or quiet.” The others nod, and she smiles, as the headline band filter through the dressing room doors and finish up Modern Woman’s chips.