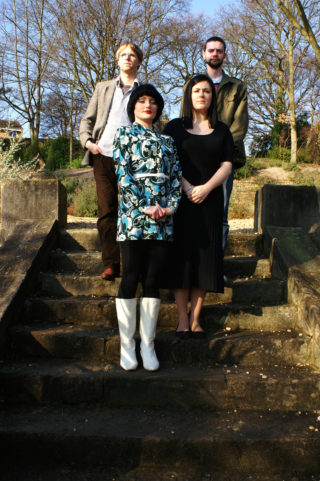 Navvy are unashamedly pop, yet compulsively angst ridden. By pooling their collective distaste for the mundane they’ve created one of the most exciting albums ever released by Angular Records. We retreat from the bitter cold into the bowels of a Sheffield pub to discuss the joys of synthesisers, their hatred of ‘cock rock’ and why it’s time move on from New Yorkshire.

Formed in 2003 Navvy met through the vagaries of the Sheffield music scene and adverts posted in local laundrettes. Featuring Claire Hill on synths and vocals, Keith Jones on vocals and bass and Daffyd ‘Daf’ Spink on guitar, Marie McCulloch was last to join the band on drums, meeting them whilst DJing at a local nightclub.

Debut album, ‘Idyll Intangible’, harks back to a time when bands like Lush and Elastica formed part of the musical landscape. Does that era influence their music?

Claire says: “It’s strange really, but we haven’t got any influences. When Keith writes the songs, he writes the bassline and lyrics, but it’s the sum of all our individual parts, isn’t it? I mean we’re all influenced by different things so when it comes together at the end it’s kind of surprising. I know that we’ve had a lot of Bis comparisons because of the shouty vocals and girl/boy thing…”

“I’m not sure I’ve heard of Bis,” interjects Daf, prompting Claire to sing, “Sugar Sugar Candy Pop, push it down, pull it up.”

2008 was a good year for Navvy, with plaudits flooding in from all over the music press and tours with The Long Blondes and The Noisettes. Together they see last years BBC 6music session with Mark Riley as their first big break, describing it as “a dream come true”. And in March they’re touring the UK, followed by a show to celebrate one year of our own club night in May, Dirty Bingo Vs Loud And Quiet. “I think we’re first on so we can just sound-check, then play, then get really drunk!” enthuses an excited Claire.

In the past they’ve been compared to bands like Wire, Devo and Pixies. The question of influences is met with silence and a collective furrowing of brows.

“I feel very flattered if we are compared to The Pixies,” says Marie. “I don’t know, it would be nice to think that we sound like The Pixies because I love them.”

“Before I’d been in Navvy I was listening to a lot of early Pulp,” enlightens Claire. “Separations and all that, so that was an influence on me. Especially on ‘Disco’, with the driving synths the whole way through.”

Until this point the boys have remained fairly reticent, peering into their drinks, content to let the girls do the talking. Discussion turns to where they fit in alongside the current crop of indie bands and an increasingly celeb/scenes-obsessed audience.

Keith answers in barely audible whisper: “I don’t really listen to modern music. I don’t buy magazines or listen to the radio so….”

“We don’t want to fit into a certain mould,” agrees Claire. “I know there’s New Yorkshire and that’s kind of gone by, it’s a bit in the past now. We don’t purposefully make ourselves difficult to listen to. I think our music could be, but because of what we’ve done with the album, we’ve brought out the pop side of it. So, we do want it to be popular, but without selling out.”

“Of course we want to sell more records,” concludes Marie “but we’ve also got the pop inside us that’s trying to get out!” 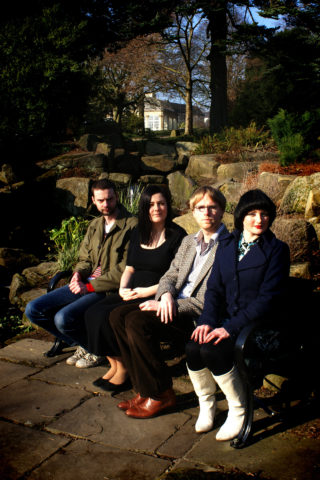 After breaking to refill our drinks it’s clear the question of fitting in still has them vexed. Claire tries a different tack: “I suppose it never really concerned us because at the moment we’ll never have enough records to majorly compete with these big labels anyway, so we just do it for the love really.”

Navvy’s style veers from post punk, almost maudlin sounds, like the eponymous ‘Navvy’, to ‘Robot’s’ bouncy Buzzcocks rant. Yet lines like, “Real life does not make sense”, in ‘Letters’, and “Don’t try to look for meaning”, in ‘Disco’, always retain the constant undercurrent of dissatisfaction.

“I’ve got quite a small little life so I don’t really watch any TV or read a newspaper,” explains lyricist Keith “so none of those kind of things affect my day to day life, so I tend to worry about… erm…”

Claire interjects, reciting lyrics of the band’s single: “Whether you could go to a Disco or not, because it’s quite temporary, because we put a lot of importance on the superficial, transient things.” Laughing, she looks to Keith. “Do you agree?”

“I don’t know how I ended up being the lyricist anyway,” he replies. “I kinda took the job because I wouldn’t trust anyone else to do it. The words are quite important to me anyway.”

Everyone mutters, “Thanks Keith”. Feeling conscious of causing a rift, we move discussion onto the new album.

“Cos we’ve been playing a lot of these songs for a while, I think that the album was an opportunity to get them down and done and sounding really great and I think it did that,” states a proud Marie.

Claire: “I really like the pop aspect of it. It’s kind of unashamedly pop. We wanted to make it enjoyable, so the lyrics are really angsty, but it’s not a morose, depressing listen; it’s upbeat.”

“We’re a very fertile band,” says the guitarist. “We’ve all got side projects and things coming out.”

“We can’t be idle really,” adds Claire. “We’re not happy unless we’re in freezing practice rooms at least 3 or 4 nights a week!”

With the boys huddled together discussing album artwork, the topic of the current music scene resurfaces.

“Don’t The View have an album called ‘Which Bitch?’” exclaim Daf. “Since when do indie bands call albums that? It’s shit!”

Marie: “I was reading in the Guardian about bands like Scouting For Girls and The Twang and that kind of ‘cock rock’, absolute lager bollocks! I think it’s kind of turned it full circle that the top tips for 2009 are all electro girls, because people are absolutely hating that kind of bullshit and now they’re going for things like Little Boots and La Roux. It’s kind of like the antithesis of that kind of horrendous… churning out that kind of shit, it’s unbelievable!”

There are some bands out there that don’t feel compelled to heap scorn on. Marie confesses to “playing Justice’s record to death”, Daf extols the virtues of Crystal Stilts, Deerhunter and Titus Andronicus, Claire’s listening to The B52s and folk acts like Au Revoir Simone, Coco Rosie and Joanna Newsom.

As yet there are no festivals on the cards, but 2009 already looks bright for Navvy, even if the band don’t know it. “We haven’t really thought that far ahead,” says Claire. “I think we’re going to just do the whole thing with the album and then discuss the next step. I’ll keep listening to those Pulp CDs, getting ideas.”