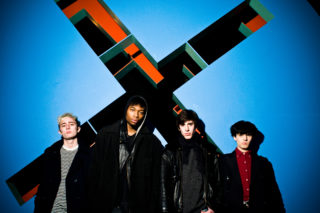 Someone – probably a fashion industry type – once said that first impressions are everything. They were wrong, of course, and in their blind saunter through contemporary culture they would have missed out on a great deal, including O. Children. Actually, they would have probably booked O. Children for a photo shoot, but potential fans that only glance at this band might hastily dismiss them as vacuous, no-talent hipsters. In fact, their past and present youth scene connections, and great taste in clothes, belie a sprawling frame of reference and a natural aptitude for songwriting. It’s quite surprising that, sounding ace and looking cool for eight or so months, Tobi (vocals), Gauthier (guitar), Harry (bass) and Andy (drums) haven’t already been fired out of the hype cannon into the cosmos. That time is on its way, but for now they sit in the offices of a management company that are “just helping out”, explaining how they started and how those currently banding their name about are getting it wrong.

“It started off with me, after like a hiatus of not making music – ‘cause I hated making music – and kind of getting the itch again,” says Tobi. “I recorded general ideas and put them up on Myspace, as you do, and people seemed to get into it so I set out looking for people. Luckily me and Harry already knew each other (we met while bonding to Rage Against The Machine in his bedroom) and I met Gauthier through friends.” Fourth member and man with the sticks, Andy, came with Tobi from previous enterprise Bono Must Die; a band with potential that was eventually drowned in London shite gossip pages, legal issues and its own persistent sarcasm. This affiliation has caused a few problems for the band as they try to escape from a self-congratulating scene that’s put away its luminous pink squid outfit, donned black and an intimate knowledge of Bauhaus. 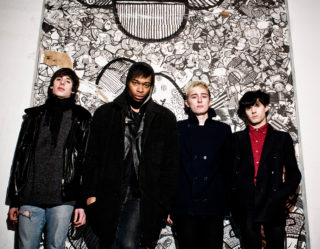 “We got ourselves pigeon-holed in this scene and then tried to get out of it,” says Gauthier. “Now, I think the good thing would be that we don’t recreate a new scene but that more and more bands just get away from the whole pigeon-holing thing.”

“I don’t like it at all,” adds Harry. “I personally think there’s not enough good bands in that scene, I really don’t think there’s much quality. There are a lot of great new bands, but they’re not part of this scene, and you don’t have to be.”

Tobi, as you’d expect from a man whose vigorously musical teens spanned the mid-part of this decade, gives a pretty good analysis of recent guitar-pop history and some life lessons for any would-be pop careerists:

“After that film Control came out – and this has nothing to do with us by the way, ha ha – I saw this kind of flux of people that I’d known from previous bands, that were making new rave before and Libertines ‘indie, indie’ music before that, always changing and changing and changing. And in a way I, not them, could have been accused of doing that… But I realise now that if you do that you’ll be chasing your tail for a long time. I’m not saying run away from it and don’t conform, I’m just saying it’s good to 1. not take yourself too seriously because you never know where the hell you’re going to go and 2. make music that you genuinely love.

“See, from being in Bono Must Die and previous band (short-lived but totally awesome) The Go Naturals, I realised that if you really believe your hype and take yourself that seriously and think you’re making something so unbelievably new and good, and all your friends are too, and you’re very one sided about the whole thing, it will completely eat you up and you’ll be spat out and it will crash and burn, most definitely.”

“The only reason we live in east London is that we can’t afford to live anywhere else,” insists Andy, but there are reasons other than their postcode for people pinning O. Children to the wave of post-punk/gothic shoegaze/whatever’s washing about at present. One is the assertion that they move with the post-Control flock Tobi just described. “Have you heard this whole thing?” he asks “they’re like, ‘Oh yeah those guys really sound like Joy Division’. Listen to the songs, they sound nothing like Joy Division! Yeah! If anything it’s more New Order.”

“Joy Division came after the punk thing,” adds Harry “ and it was really rock-y and punk-y as opposed to a more electronic, kind of 80s chorus-y sound.”

Though the band do acknowledge the influence of a whole bunch of post-punk artists, they also name check Lee Hazelwood, Donna Summer and Heaven 17 and are keen to define themselves as writers of pop, working to make something tuneful. “When you really think about it,” says Tobi “we are kind of melodic, more thought-out pop with just the edge of our influences. We listen to music and we’re not influenced by the sound so much as the art form, the way it’s made. We are trying to mould something that’s slightly special.”

What has made the biggest impact on them, obviously present in their sound and their name, is a shared passion for Nick Cave, a man/phenomenon you feel they could talk about for hours. “The thing is, I think you just look at him and go ‘he’s fucking cool,’” Gauthier marvels. “Also, the range of music that Nick Cave has made throughout his career – from the raw Birthday Party stuff to what he does now with the Bad Seeds – that’s the thing that we try to do; to not focus on one particular style because at the end of it, we like pop, and pop in the way that it’s so wide and varied and has so many origins.”

“‘What a Baddass’, we say to ourselves, ‘what a Baddass,’” agrees Tobi “and that is what we are here to do; we’re here to emulate and – risky as it sounds – almost, take over from him. We’re gonna be the guys that take over Nick Cave and dance on his grave, his Children. O. Children.” It’s an absurd boast but it’s a sign of genuine self-belief, something they deserve having recorded their storming demos on a Mac, using only its built-in microphone and a midi keyboard.

“This is why we really wanna get in a proper studio,” says Andy who for now is keeping the band alive with a job in a clothes shop “cause if people like the demos, where Tobi’s talking to a computer screen, then with a proper microphone they’d be blown away. We wanna be bigger, like we wanna have a bigger sound production than we can afford. We’re just doing what we can with what we have”.

What would they do if someone bankrolled this ambition?

“Or some samplers here and there, drum pads”, says Tobi. “As we progress we’re gonna get a lot more funky with our sound. We want to work on something we feel we can give our heart and soul to and it turns out it’s this. What we’re saying is that in two months… we’re going to blow you away. That’s basically it.”