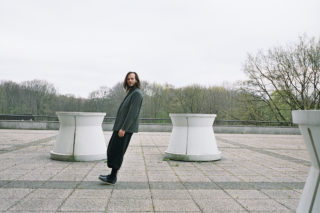 Hendrik Weber composed his new record floating above a city he feels out of time with. We went to meet him in Berlin.

As anybody that has ever been to Primavera Sound in Barcelona will know, the indoor auditorium they have there is a strange black vortex once inside. It is the sort of room that has life-sucking power should you be functioning on little sleep and an accumulative festival hangover. It’s a room I’ve had to leave as crippling nausea has taken over me more than once, although one time that was just because of My Bloody Valentine. It is a room that has defeated my fragile psyche on multiple occasions, and as a regular and long-time attendee of the festival I often enter it riddled with fear and anxiety. Once such instance was in 2013 when seeing Pantha Du Prince and the Bell Laboratory – I almost left before it began due to a growing sense of unease, depleted serotonin levels and a clouded head full of mush and self-loathing. However, what soon unfurled in front of me was one of the most quietly euphoric musical performances I’ve ever encountered.

As cloaked people walked the aisles gently ringing bells with a masterful delicacy, the room soon transformed into a humming, meditative organism that pulsated and breathed. This sonorous black box came to life and acted as a tonic, bringing me around to do the same. It built and grew from the resonating organic twinkling of the bells into an almost tropical techno flourish as the beats carried it forward, raising it higher. People got to their feet and danced in the aisles; they whooped in delight as the music carefully crept and rose. It was about 4pm and I left invigorated and resplendent. It was a transformative musical experience that has long lingered within me.

As I arrive to meet Hendrik Weber, the man behind the moniker Pantha Du Prince, at the House of World Cultures in his home city of Berlin, the first thing I see is a huge freestanding tower with multiple bells within it, a giant, 42m tall carillon comprised of 68 bells, which is played as a musical instrument from a central cabin, the musician having to use his fists and feet to play it on a baton-and-pedal keyboard. A condensed and more transportable version of this instrument was taken on tour by Weber and used at the very show I had witnessed years earlier.

But Weber has chosen the location for more practical than symbolic reasons as he is currently working on a project in the neighbouring building where our interview takes place. It is this project and concept that will form the basis for the next Bell Laboratory record. That, however, is way into the future. Right now, Weber has his first Pantha Du Prince solo record (‘The Triad’) out since 2010’s ‘Black Noise’. We walk to various crevices and corners of the cavernous building (which is a bit like the Barbican) and we sit down to chat but then something catches Weber’s eye or blurs his hearing, a workman’s clank or some distant chatter, and we move about four times before settling on a location Weber feels comfortable talking in. I’m guessing that such silence is important to him in the creative process. “Environment is very important but it is also not very important,” he says paradoxically with a slight smirk behind a thick, full beard, “because if you are there and the music is there [that’s enough]. But I do realise that it needs some kind of remoteness, some kind of silent, special place. I think every record has a footprint from the space it’s made from.

“For this record the footprint was this apartment in Berlin,” he says, “where I had this tiny room that overlooked the whole city, which felt like you were floating across the city because it was this greenhouse situation with a lot of plants. It was very nice. This is very much the vibe of the record, this airiness and floating sense and a very transportive openness. It’s more up than down. ‘Black Noise’ was earthier; the new one is more airy, windy, fiery. It’s a wind and fire album whereas ‘Black Noise’ was more earth and wood and crystals.”

If that sounds rather ambiguous then it’s only because it’s an emblematic statement of Weber’s musical constructs on the record that, despite his tendencies for complex metaphors and defined concepts, does toil in woozy ambiguity. Like previous work, ‘The Triad’ blurs sounds and shatters genres, ranging from ambient techno to immersive shoegaze to noir-pop, all whilst retaining a core characteristic that feels uniquely Pantha Du Prince. The record floats in an in-between state, almost as if it is drifting in and out of consciousness, which, as it transpires, was sort of the point. Weber describes the paradigm of the album as being like “this concrete utopia that is conscious and unconscious at the same time.” He then goes on to describe some of the functions and personalities of this utopia he has created, that whilst expansive in scope and ambition still remains distinctly personal to him. “I would always say that I [as a person] really come from the material. To dive into the material is also something very personal. I always really try to stay close to this rather than have a conceptual approach. It’s more like, what does the music really tell me in that moment where I let go, when I’m not present anymore – this mystical moment where you’re not the person who is sitting here with this physical identity. That moment when the music takes you is a very relieving moment; a very healing and very uplifting moment.”

‘Triad’ is an elemental record with large nods to nature, both literally, via the song titles, and texturally. It’s an affinity that Weber feels closer to than the raging, hedonistic life of Berlin’s techno scene. “I’m not part of the Berlin techno culture,” he says. “I was for a while but you go out sometimes and it’s not like I feel it’s my family or anything, or that I’m a symbol figure for any kind of scene in this Berlin world. I’m not into the lifestyle; I’m more into the music. I prefer going out into the countryside or going to other countries to work on projects there. There was a time for me when that scene was interesting but at the moment it has reached this level [of becoming the same]. Berlin gives you interconnecting possibilities – for me it’s not so much about the music scene, it’s more about the other scenes of the city and going out is just something extra, something that you almost don’t need on a certain level.” It’s a realisation that Weber has come to after some time in the city and from operating in its music world. “I just discovered this after being on tour for almost ten years now, that music is like the same space I’m moving in when I move in nature. It’s giving me the same energy and then I have to go back to nature to connect with the music again. I could probably just spend my life running through the forest and singing.”

Yet the most challenging aspect of this record for Weber has been his immersion into the analogue equipment that shaped it and, as like most things with Pantha Du Prince, it boasts a larger social metaphor too.

“This is something that really bugs me at the moment,” he says, “people trying to get this full self-efficiency through the machines they have in front of them. Social interaction reaches this stage where if it’s not perfect it’s not right. This record reflects this idea of using analogue gear and just using it as it is. You are then given the possibility of embracing the situation as it is and not try to control it all the time and make it better and better. That process can be good, I enjoyed it very much on ‘Black Noise’, to go deeper and deeper into the detail and control it even more and make it more your thing. I like the accepting nature of this record, I like the tonality of it, the sound is connected to this [analogue] machine.”

‘The Triad’ continues the previous trajectory of Pantha Du Prince in confounding expectation but retaining a sonic consistency and it’s an approach that has been both welcoming and troublesome for Weber. “It’s not pop music,” he says. “It’s not conceptual electronic music either – it keeps the doors open and the windows open and that’s something that I think is very valid for this project. I have a tendency to be a little bit ahead of time. Previously I’ve been criticised by some of my techno friends about the music I make and also some of the indie world would always ask, ‘why do you need this beat?’ The same is probably the case with this record. I always take the risk of trying to be a little bit ahead of time whereas other people might be a bit more concerned about hitting the right spot to be successful.”