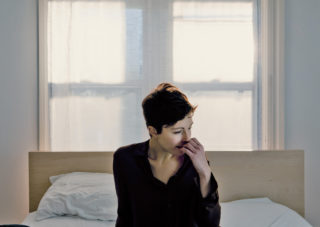 Channy Leaneagh discussed debut album 'Give You The Ghost'

Channy Leaneagh has been home for 24 hours. She’s been on the road, and the centre of attention since Jay-Z posted her band’s video on his Life + Times blog. Shortly after, at The Grammy’s, Justin Vernon announced that Poliça are the best band he’s ever heard. It’s hardly surprising that such weighty endorsements now precede this project of Channy’s and producer Ryan Olson’s, but even if Vernon has an invested interest (his Bon Iver partner Mike Noyce sings on a couple of Poliça tracks; he himself has been part of Olson’s other project, Gayngs) and Jigga doesn’t really write his own blog, Poliça are making future RnB well worth getting excited about.

‘Give You The Ghost’ – the band’s debut album – is a collection of robo love songs about the break up of a relationship. It teeters between being sad enough to make your dustbin cry and sexily defiant, like Aaliyah. It’s never one thing or the other – it’s always both. Channy likens it to the music she grew up on – American Roots music and classic folk singers. “With those types of music you have very upbeat tempos and melodies with woman singing about their husbands who never came back from the war, never came back from sea, and yet it’s music that lightens your heart,” she says. “And the same thing, when I perform at night I feel very good. It’s like a load has been lifted off, because the overall message is, ‘this is not going to kill you’. The music is upbeat and uplifting and sexy at the same time. It’s an overall positive, hopeful vibe.

“I guess it’s sort of the style I do art in,” she continues. “It is pretty personal so that it’s something I can pull out every night. But also there’s a lot of the things that people don’t know. I write interweaving myself and a character that can elaborate on the truth. So I’m building a record of stories that are based on my experiences, but it’s much more dramatic than reality, and that way it can become a character that I build on, and I can reach into a dark place in the performance and then come out of it at the end.” 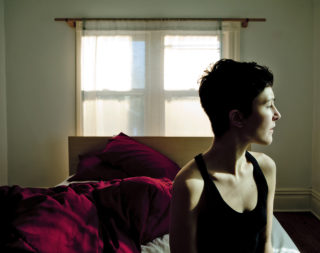 Home for Channy is Minneapolis, Minnesota. It’s where she’s always lived, bar a short period in Cambodia and college years in Dakota. She studied the violin and married a Bob Dylan fan. They busked to the point of becoming local celebrities. “People love the violin,” she says, “so we made good money, and then I started to do more of the singing.” Meanwhile, Ryan Olson – a local producer and member of punk band Building Better Bombs – was looking to form a new soft-rock collective he’d eventually call Gayngs. By the end he had pulled together close to 25 local musicians for the project, Channy being one of them. In between Gayngs tours, Ryan played Channy a load of beats and synth lines he’d originally made for another hip-hop group and another synth-lead RnB band. Once Channy put lyrics to them, Poliça was born. “There was that groove and dancebility that reminded me of the RnB that I loved,” remembers Channy, who might have studied the violin but grew up on a diet of Lauren Hill, The Roots, Aaliyah and Common. “I’d been singing folk and blues songs for 6 years – it was like going to school, but once I got to sing my own songs, RnB was the first thing I wanted to sing… and besides, I wasn’t a very good violin player.”

Today, Olson is something of silent partner in Poliça. Channy insists that her producer and beats chemist is “still there in spirit”, but he’s not a member of the touring band. “I’ve stolen some of his dance moves,” she says, “but other than pressing ‘go’ on the laptop there really wouldn’t be that much for him to do.” It also lands on Channy, then, to take care of all press matters by herself, something that she seems destined to be at odds with. Where she is now – at home, painting her daughter’s fingernails – is where the softly spoken Channy Leaneagh seems to be most suited, not posing for photographs and talking herself up to journalists.

“It is hard,” she says, “because I’m pretty private, and I didn’t write these songs by myself – Ryan isn’t doing interviews so I want to represent the band well and I don’t want to take credit for everything. For someone who’s pretty introverted, it’s hard. And posing in front of the camera, yeah, that’s bizarre. But, y’know, it’s part of the job,” she sighs.

Her coyness aside, there’s an impressive transparency to Poliça. Although embellished, ‘Give You The Ghost’ is a highly personal and emotional album, whose lyrics are bled across the band’s website in scarlet red. Channy keeps a diary there too, posting her thoughts and fears from the back of the tour bus. It seems that the road has had her thinking a lot. In one post-SXSW entry she wrote, I’m learning and deciding about the sort of band I want POLIÇA to be.

“I think I’ve figured that out,” she says. “The amount of interviews I do have helped me figure a lot of things out that I tried not to think about before. Just like, do I want to be the leader of this band, or do I want to be a part of it? It’s natural for people to think of me as the front woman, but I really want it to be a team, and get the band to do interviews with me, and let people know that they’re an important part of the sound.

“The Road is hard,” she continues, “and different bands deal with the staff and the success differently. I’m not putting anybody down here, but I think we realised as a band to treat the staff and our team of people as well as we possibly can, and be grateful for them. There is something to be said about being too comfortable on the road – I’ve not experienced extreme comfort on the road yet, but it’s funny how the more successful you are the more free things you get, when we know all of our friends back home are struggling. You’re getting the attention right now, and it’s not unfair, but how do you deal with that in a humble way?”

With Olson producing and juggling many other projects back in Minneapolis, Poliça are, effectively, Channy, bassist Chris Bierdan and twin drummers Ben Ivascu and Drew Christopherson. Channy describes Drew as “a hip-hop drummer who can hold down a really nice groove”, while Ben – schooled in noise and hardcore but with a jazz history – boasts “a strong suit in flourishes and walls of sound”. Chris – who “absolutely loves The British accent, and not in a funny way” – provides improvisational melodies rather than rhythms. And then there’s Channy, not so much a singer as a musician playing her voice, drenched in enough autotune to make T-Pain sounds like Morrissey. Poliça throb, sometimes to intergalactic synthesisers, the drums dance, and Channy’s vocals ride amongst the crescendos to a melody you never saw coming. Syllables frequently appear to hang in the air for twice as long as they normally would. Perhaps that’s why the lyrics of ‘Give You The Ghost’ are so readily available – because otherwise you’d have no idea what Channy is singing.

“[The autotune] was a part of the original process,” she explains. “I was in the middle of Gayngs tours, using the same pedal that I use for Poliça. It was a natural move for me, but we had no plans to be a band – it was just me and Ryan hanging out and experimenting, so it wasn’t like, ‘shall we use autotune on this or not?’. It surprises me that for some people it’s even an issue, because it was never a second guess for us – it was just part of the experiment.

“I’m not using it to correct my voice,” she continues. “I actually have a harder time singing through the pedal than I do singing normally – it’s more work, and more athletic, almost, because if I don’t sing loud enough it won’t catch the effect, for example. So it’s more of a challenge, and it’s more exciting, and I guess what it does is for me is it puts my voice on drugs. I guess it’s not necessary, but I would really miss it in this project. It takes my mind to a different place. What autotune does is it catches your voice as you move through the melody, and you can play with it in very rhythmic ways.”

Like The Knife and Fever Ray, Channy sees this extreme use of voice-alteration as “creating a character and an alien.” She’s certainly not trying to trick anyone that this impish, high squeal is her natural voice, and underneath it all you can tell that she can carry a tune. A neat side effect is that historically placing Poliça is pretty much impossible. Channy says that she never knows who her influences are, and while ’90s RnB has definitely gone into ‘Dark Star’, old skool dub into ‘I See My Mother’ and Dummy-era Portishead elsewhere, Poliça’s android love jams seem to be of some post-digital age.

“I don’t hear a certain era in it, no,” she says. “It has a very future quality, and I don’t say that complimenting myself, but almost like, because of the effected vocals, they always have an alien, inhuman quality to me that’s hard to place in musical history. Do you know Pete Drake and his talking guitar, from the ’60s? Look it up – he built this contraption to sing though his steel guitar. It’s very much like autotune, and I listened to that music and thought what did people think in the ’60s when they first heard this!? Like, oh my gosh!

“I wrote these songs about a particular time and point in my life,” she says, “but now that I’m releasing it to the public it’s sort of like giving the listener a ghost of that time, because it’s something that doesn’t really exist in me anymore. I’m ridding myself of it, and now it’s yours.”