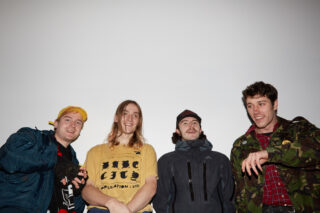 Grasping a towel to cover a vest and a pair of Adidas joggers, it’s hard to tell if Powerplant’s synth player Cam Pickering is pleased to see us or not. Suffering from a case of tonsillitis and, frankly, looking more-than-slightly worse for wear, we’re on his doorstep to see if he’s up for being in the band photos. Either way, he invites us into the abandoned youth club that now serves as his home and his band’s nerve centre.

Inside, we’re ushered into a former sports hall that is now an office-meets-studio-meets-living room. Instantly, the band are transformed into excitable 13-year-olds, running from wall to wall and snatching up various objets d’art as they pose for photographs. “Do you guys do many shows from here?” I ask Pickering as we both observe the chaos. “We used to,” he replies, “but we’ve only got the place for a year or so, so we’ve been keeping things pretty low key.”

15 minutes later, we let Pickering return to his sickbed and head back around the corner to the local Wetherspoons, where the band plan on grabbing a bite to eat. Soon enough, a rather anaemic-looking pizza arrives at the table, and the band’s percussionist Billy Trick is wasting no time tucking into it.

“That’s one sad fucking pizza,” his bandmate Theo Zhykharyev remarks, leaning over the table and looking perplexed at the fluorescent orange disc that’s been plonked down in front of us.

“Usually, they’re way shitter than this,” replies Trick, reaching for a slice. “I remember having a burrito in the ’Spoons in Elephant and Castle before I went to see the Oh Sees in like 2015. It was nice at the time, but by the time the show started, I kept thinking, ‘Something mad is going on in my stomach’. Eventually, I walked out, and I was like, ‘I don’t feel good.’ Long story short, I ended up projectile vomiting on the way home.”

“Want to know my dad’s life hack?” asks drummer Lloyd Clipson, with a mischievous grin spreading over his face. You just know that this is an attempt to gross us out, and to his credit, he doesn’t disappoint. “My dad can’t taste or smell, so to get the most out of eating out, he puts loads of tartar sauce all over it, mainly because it’s the most chunky sauce that Wetherspoons offer.” 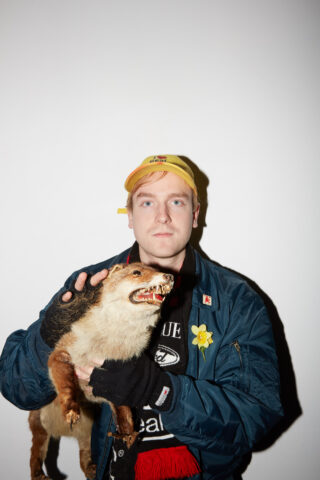 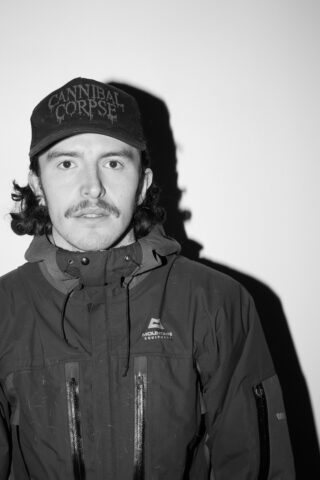 Powerplant are an unlikely bunch to get your head around, and it’s not only for the mix of personalities. One of the most distinctive-sounding acts currently doing the rounds on London’s DIY scene, their sound is kind of like mayonnaise, blending a range of different, sometimes contradictory ingredients; on paper, it shouldn’t work, but somehow it does. They’re one of those bands who drive music journalists wild, mainly by not quite sounding like anything in particular. Should their reliance on electronics stick them in the electro-punk/cyber-punk categories, or does their driving sound nudge them towards the new hardcore scene? Or maybe they’re closer to one of those Soundcloud microgenres with names like ‘egg punk’? Then again, who cares? Like every other band Powerplant just want to make music that bangs.

“Powerplant is actually my second attempt at making music on my own,” Zhykharyev explains. “The idea was for it to be kinda fast and mostly synth-driven, textbook internet synth-punk. I guess it took some turns along the way. In the beginning, I did everything myself because executing and translating everything on my own was the most immediate way to make it work. I realised there were guys like Ty Segall and Jay Reatard who did everything or played everything themselves, and that sort of proved I can do everything on my own and I could just go and do it.”

As a solo artist, he released 2017’s Dog Sees Ghosts and Quiet at Night, both haunted garage rock records that are all stabbed guitars and reverb vocals. Zhykharyev is the first to admit that, at the time, he found the reaction disappointing – “I was literally like, ‘This is a joke – no one cares’” – but thanks to Harakiri Diat, a YouTuber on a mission to document punk in its strangest forms, things started to happen.

“I can remember getting this order in from Japan, which was insane, but I guess everyone’s famous online at some point someday,” he laughs. “If your length satisfies the algorithm, plus you have a cool cover, then you’re probably all set. Hats off to channels like Harakiri and Anti (formerly known as Jimmy) though, those guys have shown the way to countless classics at this stage by just accepting submissions and having great taste. I’d say Diat at this point is the most trustworthy, go-to source of internet punk in a way that both feeds the community content and helps new people to find a footing. It’s hard to imagine a less connected world.”

The next milestone in the band’s development came when Zhykharyev moved into a South London houseshare with Clipson at the tail end of 2017. Clipson, a drummer, picks up the story.

“I was playing in a bunch of bands, and I can remember him playing me his stuff and just floating the idea of ‘Hey, it would be cool to see what this sounds like with live drums.’ I don’t even think there was any intention to play shows at that point – it was more an experiment to see what it sounded like as a band.”

“Meeting these guys came at the perfect time for me. I was kind of slowly thinking to myself ‘Okay, maybe it is time for other people to come in,’” adds Zhykharyev. “We kind of knew what each of us did and loved it from a distance. I think we just bonded over respect and appreciation for each other, and being in a band has been a good excuse to spend more time together. I think it’s really cool to have a group of people who all love the same stuff but don’t necessarily output in the same vein as each other; it almost always results in something different and special.”

Evolving his project into a fully-fledged band not only allowed Zhykharyev to concentrate on what he’s good at, but also brought new influences to the Powerplant’s sound. Clipson, Trick and bassist Karim Newble, with their backgrounds in the capital’s hardcore scene, brought thrashier elements, while Pickering has a more experimental has brought more atmospheric leanings and a new, more rounded approach to production. The result was 2019’s People in the Sun, a record that took the band’s original garage and psychedelic leanings but ramped the energy up as high as it could go. Taking the Ty Segall pretensions of the early EPs and twisting them into something akin to a modern-day UK Subs, it garnered instant critical praise and instigated a wave of hype that the band has been riding on ever since. 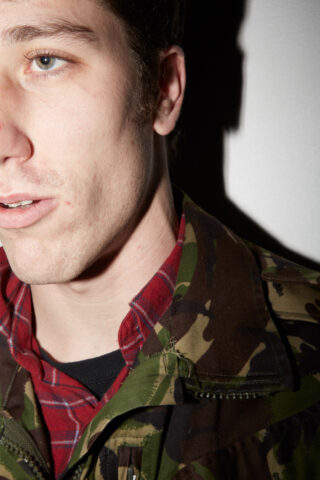 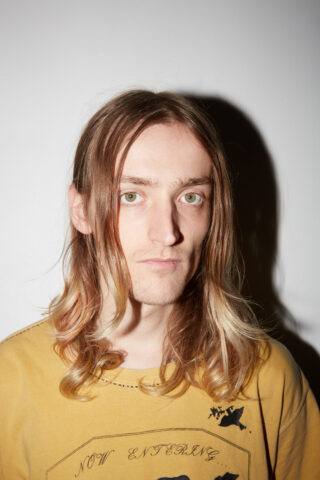 Adding new members also allowed Powerplant to plug directly into London’s emerging hardcore scene. Now, for guys of a certain vintage like me, hardcore was a scene that was almost pathological about genre lines, and it’s weird to think of a multi-faceted, contradictory project like this being accepted into the fold; to their credit, though, the capital’s punk kids have taken the Powerplant under their wing, and they regularly share bills with more conventional hardcore acts like Chubby and the Gang, High Vis and The Chisel.

“I don’t know how we’ve ended up there, but I feel like being able to play with those guys has been a big advantage,” explains Clipson as we try to prise apart the mystery. “I feel like bands that aren’t into a specific scene end up doing all sorts of shit – like I know people who’ve done bands and end up playing these miscellaneous shows supporting some shitty band in someplace where you don’t know anyone. So it’s been nice to have been able to put down roots in the hardcore scene, it’s like you turn up and there are all your friends, and everyone’s just stoked from the get-go.”

“I always say that we’re hardcore adjacent,” adds Zhykharev. “I dare not speak on the behalf of everyone out there, but everyone I’ve met has been a real human being while tolerating very little bullshit. It’s literally taken people’s youth to get it to where it is right now – a community of supportive, honest people with a backbone of labels, venues and collectives who are all looking out for each other. It’s taken years of blood and sweat – you’ve got to respect that.” 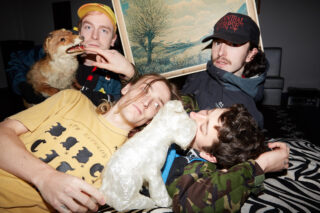 Don’t go thinking you’ve got Powerplant figured out though. Dungeon Synth, the band’s latest release, is something different entirely. Named after and inspired by the obscure death metal offshoot, it’s a collection of instrumental electronica written, produced and recorded by Zhykharyev during the last days of the 2021 lockdown. As of January 2022, the band has released two songs from what promises to be an 18-track opus, and if singles ‘Pixie GF’ and ‘The Wheel’ are anything to go by, it’s going to be pretty out there. If you can imagine Basil Poledouris’ soundtrack for Conan the Barbarian, crossed with the music from an old Commodore 64 game, you’re getting there.

Zhykharyev shrugs modestly when I ask what’s behind the sudden change in direction. “For ages, I’d been contemplating whether I should or shouldn’t genre-hop, and if this would be too silly to do after loads of punk records, but generally, I have a restless desire to intentionally do the stupidest play in any given circumstance. I’m not sure if this is some form of self-sabotage, but I just have to satisfy the urge. There was a bit of a back and forth in my head going, ‘Could I…? Lest…? Jest…? Perchance…?’ – and then it sort of happened. It’s actually been the most I’ve smiled in a long time, mainly because it’s such a great genre.”

But that’s not where the rabbit hole ends: the album also comes with Stump Soup, a Dungeons and Dragons campaign written to accompany the music. Enigmatically, Zhykharyev gives almost nothing away when I ask him for a few details of the plot. “Let’s just say it’s something that’s going to tick all the fantasy ‘sword and sorcery’ boxes, while also being quite ‘internet’. You’ll fight exquisitely-dressed rats, snort pixie dust, maybe kill an old man – but hey, it’s up to you! If you’re the right kind of a nerd, it’s going to be amazing.”