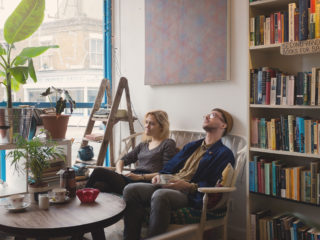 The group with three albums and no possessions

“The third one? That’s kind of like a spooky bluegrass album,” says Gwen Austin, outlining her band’s planned trilogy of releases. “My brother died a couple of years ago. Right after he died, I wrote a lot of songs about it. For whatever reason – I have no idea why – they all just came out as these weird bluegrass songs. I have a trunkload of those, and I really like them. I’d like to put them out.”

I’m over an hour into a conversation with Protection Spells and it’s clear that they’re a band with a plan – a trio of complete and dramatically contrasting albums ready to be recorded. There’s also a lot of history. Right now, they’re a four-piece. It centres around Gwendolen Austin (guitar and vocals) and Russell Marshall (guitar), but includes drummer Mat Riviere (the DIY solo songwriter) and a hometown friend of Russell’s, Jessie Widdowson, on keys. It’s a project, that over the years, has transformed a few times and covered a lot of miles.

Gwen grew up on 1st Avenue in Minneapolis, Minnesota, the street that shares a name with the iconic nightclub associated with city’s most famous son – Prince. After completing high school she moved two hours north to the picturesque snowy town of Duluth, Bob Dylan’s birthplace, on the shore of Lake Superior. “I just wanted to move away, and I’ve never stopped just wanting to move away,” she reasons. “That’s kind of why I’m here.”

In 2013, Gwen packed her case for England in order to study a degree in women, gender and sexuality at the University of Worcester. Slightly random, she admits. “I was like, ‘Can I really do this? Tell people I’m going to the sauce town?’”

She did, and she loved the quintessentially English elements of the West Midlands cathedral city. “Oh, there were swans everywhere and cobbled streets. Oh my god. It was fucking cute, I was into it,” she roars. 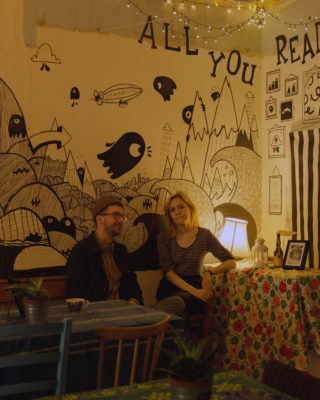 It was there, in a bar, in Russell’s hometown, where the two met. Russell had his own solo work released under the name Goodnight Lamplight (that’s winding down now, but he did recently release a cassette album made up entirely of samples taken from the long running ’80s US TV art programme The Joy of Painting, fronted by a large-haired and frequently profound host called Bob Ross). Gwen, to this point, had been a traditional folk artist, and a prolific one, writing hundreds of acoustic songs as a teenager. Russell helped produce some of that material, but detected something in those songs that would thrive with a different formula and a darker sound.

“It was a power struggle,” laughs Gwen. “Would I make you folkier? Or would you make me more electronic?”

“I couldn’t go folkier,” counters Russell. “I haven’t really got it in me. I just did what I do to songs. Certain sounds that I like – somewhere between surf-guitar and shoegaze bands.”

That’s where Protection Spells really began to take shape and move away from Gwen’s original vision for them as Shirley Collins and Davy Graham playing open mic nights. Next, was a move to Oxford, where Russell enrolled in art school and Gwen completed her dissertation. They recorded a video and submitted it to NPR’s Tiny Desk concert competition – it didn’t win, but gave them the confidence to forge ahead.

Shortly after came what Gwen now describes as “a massive quarter life crisis.” “I’d just graduated and I was like, ‘I gotta shake up my life!’” So, unsure of whether to return to the States or make a home in England, they did neither. Attracted to Ireland but realising Dublin was extortionately expensive they opted for “the largest city we could afford to live in.” They took a bus and boat to Waterford, where their free-spirited optimism wasn’t rewarded. They could only afford a small apartment – the one they got had a bedroom overrun with mould, so they dragged their mattress through the door and slept in the kitchen. Outside, with no garbage collection, rubbish piled up into a mountain. The neighbours, they say, had “given up.” The only benefit was that Russell could play his drums loudly indoors and nobody cared.

In the midst of the deteriorating conditions they adopted a skinny cat, and named her Peggy Seeger after the American folk singer. A sort of mascot for their poverty. They both worked full-time in call centres. Even the odd glimmer of positivity got snuffed out. The band briefly signed a management deal, which came to nothing. Promised opportunities never arrived. They lasted seven months before it all just got too rough. “It was the most depressing, psychologically traumatic time of my life,” reflects Gwen, still finding the humour in it. “A dark time.” 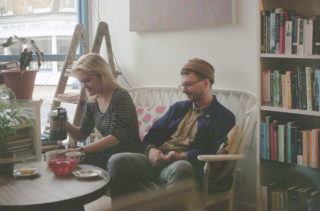 It’s almost two years on from Waterford, and today the two fourths of Protection Spells are sat in a pub in Leyton, east London on a Tuesday afternoon, a short walk from where they now rent a room. Parts of their journey may have sounded grim, but much of it has been a deliberate move. As Russell explains: “we have an affection for shitty stuff.” That doesn’t just cover why he likes the “shitty” sound of The Velvet Underground but extends to most things. It’s a resourceful attitude; one that asks why spend money unnecessarily when something else, more economic and totally satisfactory, will do? That’s why we’re sat in a bar at a table where one of the seats has fallen through, surrounded by nightshifters and gamblers, drinking a round that comes in under a tenner and the band’s clothes are all from a charity shop £1 sale (for the record, these surroundings and their attire are perfectly nice). When they play live, Gwen performs with a guitar from the ’70s, which someone had chucked away. Russell repaired it. Though it only functions when a euro coin is wedged into the neck, it sounds great.

“Our motto for living is basically to work as little as possible by spending almost nothing all of the time,” outlines Gwen. “Everything we have is just garbage – we’re total slackers. Everything is just to feed the music,” she adds.

The two of them moved to London in January 2016. They quickly realised the £1000 they had saved got them absolutely nothing in a city so expensive.

Gwen laughs: “Starting out, we were like, ‘aw, that’ll be fine’. A month later we were like, ‘I think we’re going to die!’ It was Victorian – we had hollow cheeks, living in an attic with mice.”

These days, they’ve found a bit more balance, covering rent money by working 20 hours a week, Gwen in Whole Foods and Russell at a rehearsal studio. Mat has replaced Russell on drums, and Jessie travels down from Oxford for rehearsals and shows. They’re managing themselves and booking their own shows, including recent support slots with Carla dal Forno and Jane Weaver. “They make very feminine spooky music, and so do we,” reasons Gwen, who explains that their interest in eerie folklore extends into the band’s aesthetic – their logo, for example, is a medieval looking drawing of a battle axe and a broom.

So far, there’s only a handful of tracks from Protection Spells online. There’s the noirish ‘Sister Harpy’ and ‘Daughter of Gold’, the witchy title track from an EP released last year, a lo-fi shadowy murder-ballad that could be ‘House of the Rising Sun’ were it recorded by Warpaint. But that’s barely the beginning of it. As they say, there’s three albums of material stacked up, and their “weird trajectory” is all mapped out. The first is a collection of songs that embody the Protection Spells sound – an introduction. “Pure Protection Spells,” Gwen states, “what we sound like at the moment.” Number two is a concept record. A feminist folk opera based on the nativity story. It’s the embodiment of the 25-year-old’s interest in theology, mythology and particularly the recurring depictions of women throughout religious history – it focuses primarily on Joseph, Mary’s mother Anne and Mary herself. “It doesn’t rewrite it in terms of what happened it just asks what did she [Mary] actually think about it? It looks at these women who were kind of the catalyst of history but also outside of history.”

Album three is about something much more recent and personal – the death of Gwen’s brother a couple of years ago. “I think of it as a celebration of his life,” she says. “It’s not a secret. I like to talk about him.

“Basically, I had been in England and came back home to discover that that he had died the week previous. I didn’t know. No-one told me. They knew I was coming back.”

“He took his own life,” she continues. “That’s what happened. He was lovely. He was a cool dude. He was very supportive and we really got on. That was a shock but I accept it. I was pretty immediate in accepting that that’s what he wanted to do and that’s what he needed to do. It sounds very dark – like ohh melancholy – but [the album] it’s really not about that, it’s more about like… I accept what you wanted to do, and yeah, it’s good. It’s good stuff. He wanted to be a musician so badly and he wasn’t, he was an artist, and he was so smart, and he really wanted these sort of things, so in a weird way it’ll be me giving him the sort of artistic position that he wanted.”

A couple of months ago, Protection Spells sat down to try and write the band’s biography. Shortly after, Gwen Tweeted about it saying it had been “the most emotionally draining experience of my life.” It’s no surprise, together they’ve been through a lot. Now, they just need a chance to execute their ambitions. “I’ve got big plans for it, but I can’t afford it. I don’t just want to knock it out at home and put it up,” nods Russell. “We could record all of them tomorrow. We’re ready.”