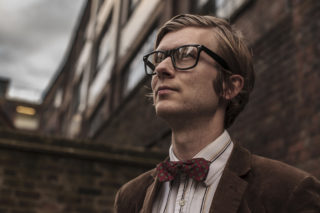 The evolution will be televised

Attempting to “teach the lessons of the past through the music of the future” is a bold mission statement, but it’s one that Public Service Broadcasting are equipped to deliver.

Based on a commitment to digging through BFI and propaganda archives, the elegantly monikered J. Willgoose, Esq. is a sample snaffler of the highest order, marrying the transcendent builds of electronica and post rock with the stiff upper-lipped nostalgia of wartime Britain.

Each track is a mini-masterpiece of craft and consideration; a triumph of crate-digging and archive footage given a new, powerful lease of life. A combination of spontaneous inspiration and careful planning, Public Service Broadcasting is a testament to the virtues of patience.

“Each song takes a while,” J begins. “There’s a fair bit of watching old films, a fair bit of contacting the people and getting the rights, and of course some people are more accommodating than others. Then you’ve got to write the flipping song. I couldn’t put a time on it in exact hours but a few months per track. The whole of the ‘War Room EP’ [released May of this year and featuring tracks as emotively titled as ‘Dig For Victory’, ‘Waltz For George’ and, simply, ‘Spitfire’] started in October and finished at the end of March so, that was a stretch – five songs, five months. It can be done a lot quicker but it’s better to take your time over it.

“I’ve been doing it for three years now,” J continues, “but the first time it happened, I was listening to Radio 4 and Tom Robinson was interviewing someone from the national archives and they said they’d just published a lot of stuff from the 40s, 50s and 60s online. I went and had a listen, then in a very rudimentary, DJ Shadow-esque kind of way, put something together and played it to my friends. Contrary to everything else I’d ever played them, they said it was really good,” he laughs.

It’s a process that hinges on a dedicated tunnel vision to single tracks, as opposed to churning through and refining a voluminous amount of content. It’s an intense process for J to perfect.

“I only ever work on one thing at a time,” he says. “That isn’t to say everything I start I finish, but it’s not like I can churn out 60 tracks and whittle them down. I definitely need four/five hour chunks of time so that if something hits me I can run with it. Often it’s three or four hours of banging your head against a wall when you’re trying to work out where a song’s going but sometimes it just makes sense. It’s just working hard to get what’s in your head out there.” 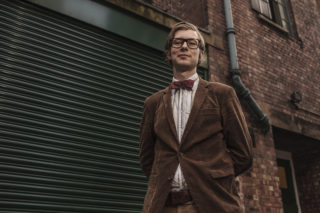 As with any instrumentally based act (there are vocals, but they come, facelessly from the archives), the transition from record to live performance is always a challenging one. It meant bringing in drummer Wigglesworth and evolving the show to rely on electronic backing as little as possible. For such a meticulous production process on record, it means that J puts particular emphasis on making the Public Broadcasting Service as much of a live event as possible. “And I’ve got better at it and better at writing things a certain way,” he says, “so things can be built up naturally live, and not rely on backing tracks. One thing I didn’t want to do was play live and be one of those people that just presses buttons. It’s all really clever but it makes it harder for people to engage with what you’re doing and I think it just creates a barrier between you and the audience. It’s finding a balance between giving the performance a live feel and also not making it prohibitively clever. Technically, it’s a bit of a challenge but it keeps it interesting.”

J “works on the principle that everything should be able to go horribly wrong.”

“Not something like your laptop catching fire,” he hastens to add, “more that you should be able to play a wrong note or if you reach a point where you miss a riff or a loop, the song is screwed. There has to be that risk of you falling flat on your face.”

After releasing ‘The War Room’ EP, J is already planning ahead. Both live and on record, evolution is the prominent driving force and a healthy fear of predictability, not failure, continues to ensure that Public Service Broadcasting will continue to push on. But for all the sepia-tinged sentimentality, the corduroy and elbow patches, and the 1960s TV sets, it’s evident that there’s a determined, futurist focus at work.

J explains: “I don’t want to come across as pretentious and unable to laugh at ourselves because I started this all with the intention of not making it about me, and pouring my heart and soul into it, although that invariably happens.

“Three years ago it was just me, playing live and there was no video. Then Wigglesworth came on-board and started playing drums, I started using video on an old TV set and now we’ve got projectors. It’s become much more audio visual.”

When J goes to see shows himself, he’s usually the guy looking the opposite way to everyone else. “I watch to see what people enjoy,” he says, “and then, in a moment of madness, I signed up for a week at the Edinburgh Fringe Festival and had to challenge myself to make the show much more entertaining. It wasn’t necessarily a cynical move; it was about making it fun for people to watch and leaving a room of happy people.

“I know what the next EP is and even the next two after that,” he says. “The first album is basically written. A few things will need reworking but I want it to be a statement of what I can do. I don’t want to become pigeonholed so the challenge is always to develop and think of something new. But there hasn’t been an album yet so if I really need to change something, I’ll do it for the album and make sure it’s right. I don’t want to fuck it up.”