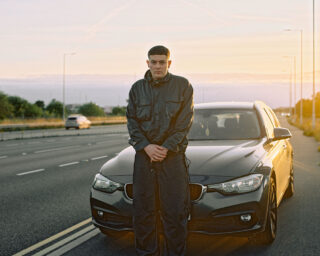 “It’s funny, you get banded into this Salford/Manchester thing but for me, when I’m writing music it’s retrospective. It’s all based on tales from growing up around there.” Rainy Miller is reflecting on how his hometown of Preston has shaped him as an artist. While he accepts that it’s far from the most fashionable of cities, an air of pride infiltrates his voice when he acknowledges the tenacity it has instilled in him. “It’s the underdog innit? This forgotten place sat in between Manchester and Liverpool. In terms of my character and mindset it has definitely had an effect.”

Now based in Manchester, Miller is an integral part of an experimental electronic scene riding a wave of critical acclaim. He shares a studio and regularly collaborates with contemporary ambient duo Space Afrika, and Blackhaine, the iconoclastic fellow Lancastrian who Miller describes as a “generational talent”. Shaping cinematic autotune vocals around deconstructed drill and industrial ambient soundscapes, Miller’s own output is nothing if not strikingly unique; genre, he insists, is little more than an afterthought. “When I’m listening to music these days, I find myself doing so to build this toolkit of sounds or gestures or motifs,” he says. “The idea of genre feels less important now.”

His passion for music and production can be traced back to the idiosyncratic grime sound that swept through his hometown in the early 2000s, when Miller had barely reached secondary school. Far removed from what was coming out of London, this hyper-localised scene paired grime beats with rapid-fire bars akin to that of a donk MC. “These MCs were like local celebrities,” he says, citing the likes of Clean Cut Connection, Killer and Worthy as some of the leading figures. “You’d struggle to find a kid in the city who wasn’t writing bars. It was a really fertile, creative thing and also so accessible.”

Providing a crash course in production, the Preston grime scene would lay the foundations for Miller’s own musical forays. He began making “two or three hip-hop beats a day” after leaving school, something that ultimately culminated in the release of his debut album, Limbs, in 2019. A soulful neo-R&B excursion, it saw him dubbed “the Lancashire Frank Ocean” upon release, largely thanks to his novel approach to using autotune. “I didn’t want to rap, and I couldn’t really sing, so it’s something I kinda fell into,” he says. “It feels really central to what I do now. I’m not musically trained, I’ve never had money to buy loads of instruments, and I wasn’t raised by a musical family, but to me that shouldn’t stop you from making music if that’s what you want to do.”

Three years on, Miller is conscious of how much he has grown as an artist in the period since his maiden LP. Illustrating this creative development is new album DESQUAMATION, a record that eschews the more pop-oriented elements of his early work for something altogether more experimental. “I now feel like I have the confidence to take my music as leftfield as I want to,” he says, insisting that this newfound freedom is the result of him “embracing subjectivity as a creative entity”.

Its title derived from the term for the shedding of outer layers of skin, DESQUAMATION comes steeped in introspection and honest emotion, with Miller candidly admitting that it was created during a time in his life when he had experienced “a bit of a meltdown”. “But this was me coming out of that as well,” he adds.

Space Afrika and Blackhaine again feature, as do the likes of Jam City, Maxwell Sterling and Jockstrap’s Georgia Ellery, but the album is unmistakably Miller’s. “I’ve put so much time and effort into other people’s records in recent years,” he reflects, “now it’s time for me to stand on my own two feet and be my own person.”