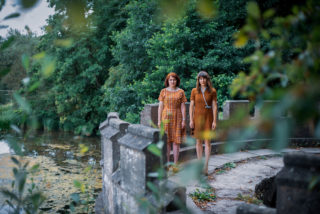 Nottingham’s Rattle – the ongoing musical project of Katharine Eira Brown and Theresa Wrigley ­– have built their sound on the unexpected, concerned with experiments in rhythm, metre and tension. With just drums as the focal point, occasional vocals flitter throughout, acting more as an instrument than a narrative. Imagine a more stripped-back, considered take on the tribalism of The Raincoats – though it’s difficult to assign any label to Rattle, who are an anomaly in terms of what’s happening in DIY scenes all over the country.

Following the critical success of their debut album, their second, ‘Sequence’ (out this month on Upset The Rhythm), captures the atmosphere and tension of the duo’s live performances, thanks to the input of their live sound engineer Mark Spivey, who fills the room in the sound of the band’s drums filtered through reverb and delays. Their drumming style is the antithesis of macho, ego-driven drummer culture, simple and unassuming, but well thought-out and meticulous. On ‘Sequence’ they’ve simplified things even further, while also maximising them too.

There aren’t many bands around doing what you do. It must be an advantage in terms of getting noticed?

Katharine: I suppose, but we’re definitely a Marmite band. We stand out and people absolutely do not get it or like it – even hate it – or it goes the other way and people say they love it and that they’ve never seen anything like it before. We might be doing something unusual but we’re not running about the venue thrusting our drums in people’s faces, so I think we stand out in quite a quiet way.

How much of your live shows are spontaneous/improvised?

Theresa: We have sections in songs, particularly the newer, longer ones, that are more suited for freer improvisation, where it’s fun to play with ‘unknown’ factors that happen at a live gig – the sound of the drums on that day in that space, the sound of the room – but most of the parts in the song are quite meticulously written. Because there is so little, if something radically changes in a ‘written’ section, it can sometimes feel like a guitar that’s out of tune, or a band that can’t hear each other properly on stage. The vocals are written to compliment the drum parts, so if the drum parts change radically it can feel a bit like a communication breakdown.

What is it about this type of drumming that you think works so well?

Katharine: When I started drumming everyone would tell me how unusually I played the drums, or that they liked my style of drumming, which often confused me, as I didn’t think I was doing anything special or unusual. I think you just play an instrument in the way you play it – in the idiosyncratic way that you would deal with any other situation in life! At the start I felt like what I was doing wasn’t enough, maybe it was too simple, and that I wasn’t really drumming, and with time and practice maybe I could build up to ‘proper’ drumming. I never had any lessons, so I’m very aware that I have very bad habits which probably mean my arms will stop working properly at some point. Theresa had been playing the drums for much longer than me, she learnt to play the drums properly and knows all her stuff, so she will notate what I am playing before she works out her parts. I think it compliments together really perfectly. Two of Theresa and we’d be too flashy, two of me and we’d be all over the place.

I first saw Jim White play with The Dirty Three when I was 16 and that was an amazing thing to see. He made me realise drumming is like dancing, and could be delicate and soft and beautiful and gentle. I also realised then that the empty space in a drumbeat is as important as the actual hits.

How do Rattle fit into Nottingham’s music scene?

Theresa: One of the reasons we like Nottingham is that it doesn’t try too hard to have its own sound or identity, so it’s fairly eclectic. I suppose that comes from being a small city with relatively little ‘success’ in comparison to Manchester, for example, but there’s a lot of positives to that. We’ve always had so much support from brilliant small venues and promoters here that have been completely happy for us to do our own thing and try something out without being perfect or defined straight-away. I don’t think we’d have felt as comfortable brewing-up ideas in somewhere exasperatingly big or career-driven like London. I see us as two of the very many creative people in Nottingham who are ambitious in what they want to create, but don’t feel like they need to be in competition or comparison with others. 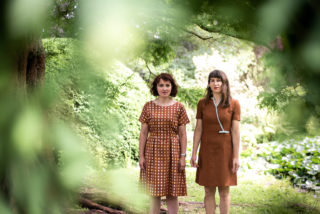 I often notice the fetishisation of women drummers. Have you experienced this? I’m especially interested in the way you’re written about because I’m always trying to get music journalists to change the way they write about women.

Katharine: I’ve definitely been told, “you are so great, for a girl!” – that kind of thing.  Or, “I love watching female drummers. But you guys can actually drum too!” I honestly don’t feel I have to prove myself or anything.

Theresa: We very occasionally get that kind of thing – “TWO female drummers, woo!” – but I think partly because it’s JUST us and you can’t dismiss one of us as in any way the token or novelty part of the band, then generally people know not to go there. You’d go a bit mad if you wanted to respond to or second-guess anyone’s weird prejudices in your music anyway, so you just have to do what you do and hope that it inspires people in a positive way.

Your music is known for being sparse and uncomplicated. Have you ever been tempted to incorporate other instruments or do something completely different?

Katharine: I love playing with other instruments, but we haven’t been tempted to do that as Rattle. To play with other musicians as Rattle is another thing, though, and we’ve loved the few times we’ve done that. Ideally, all your time would be free to make music and then you could try out everything you wanted to!

Theresa: Yes, we’d love to expand it with more voices and work with other musicians, different artists, a film-sound track, the list goes on. But having said that we’re still happy trying to play around with all the things we can do in this small parameter, which still feel really infinite.

How important is it for there to be a theatrical element to your performances?

Katharine: It is important, but not as important as making a good sound, in my opinion. I think I gravitate to more subtle theatrical elements too. We’ll try to coordinate what we wear, we’ve experimented with coordinating our movements for a one-off art performance we did earlier this year, and we’ve experimented with having visuals, which is something we would like to explore more too. We’re quite lucky; we’re quite symmetrical, so sometimes we just go with that.

There’s not much lyrical content in your music. Do you prefer to tell a story using the music rather than focus on lyrics?

Theresa: Yes, I do. That’s something again that blew my teenage mind when I saw The Dirty Three. Warren Ellis would tell all these long stories about what each song was about, and then they would play a long instrumental song. As a teenager I thought I would explode. “How can music without words be about anything?” I love imagining what might have inspired a song as a listener. It’s like tarot – you can apply a song to your own life and experiences and give it your own meaning. I think that’s when music can feel so special. I’m not saying for one second we do that, but I love that in music.