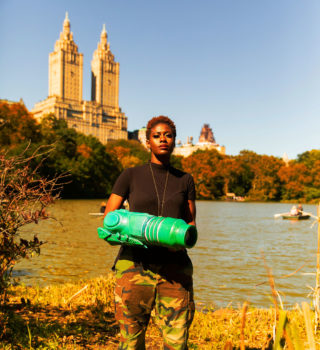 Yes, that is an arm cannon

On her most popular track to date, 2016’s ‘1080p’, the rapper Sammus exorcizes her demons, spitting bars about her struggles. She’s trying to find a place in academia as a black woman, undergoing therapy, dealing with imposter syndrome and navigating a breakup. The song goes so deep into her pain, she tells me, that she often cries after performing it live. “I think what ended up happening was that I started to be, how can I put it, it’s almost like people would come to the shows to consume my sadness, if that makes any sense.”

She isn’t complaining as she says this, rather she’s trying to articulate the emotional toll this performance of sadness takes, and the consequences of performing her pain not just for herself but for her fans and the world. It’s got her thinking about what she wants to put out there, she tells me. More specifically it’s got her thinking about how she can translate the more joyful aspects of her life into deep, textured music that feels just as connected as the sad stuff.

“Folks will, right from jump, be ‘play ‘1080p’’, ‘Do the song about depression’, ‘Do the song about sadness’ or, you know, ‘I love that you talk about being in your feelings and what it means to be hurt.’” She laughs as she’s saying this. We are not having a miserable conversation. “Because there’s a natural audience for those kinds of songs, people feel those are the most meaningful, often. Folks love to see it. I think a lot of fans of music, myself included, will think the most beautiful songs their favourite artists have written have come from moments of deep hurt or deep tragedy. But with joy it can come across as corny, or not as emotionally deep as the other side of things. So I want to challenge myself to write songs that are of course grappling with the moment and the heaviness of some of the things we’re dealing with, but temper that with who I am. Because I’m not just a sad girl. I have tremendous joy.”

Thinking about her work in this nuanced, careful way is characteristic of Sammus’ style. She’s been labelled a ‘conscious rapper’, because of the intelligence and political inflections of her music. But this label, like others (she earned a reputation as what she calls a “nerd-geek rapper” after releasing the album ‘Another M’ in 2014, based on the video-game Metroid), she rejects. Her latest music, she explains, is about showcasing the complexity of who she is outside those labels. 2016’s ‘Pieces in Space’, her debut release on the Don Giovanni label, was the beginning of that journey, and the album she’s working on right now will extend her exploration and rejection of the identities she’s forced to wear by others. “I started to become acutely aware of how my work was being read and try to find interventions to that. So for example, a lot of folks would say you’re really lyrical, we love that you don’t talk about your body, you don’t talk about sexuality. Part of my intervention was trying to say ‘No.’ There are all these different aspects of who I am and I want to reflect that in my music. So I started making music that was about rejecting these ideas.” 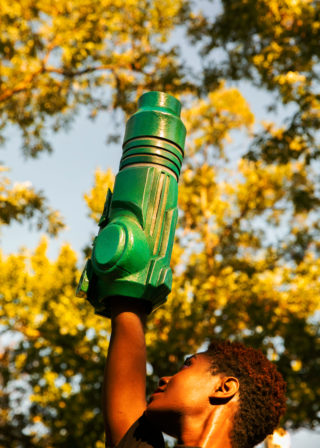 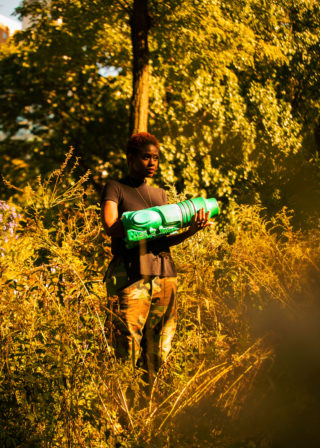 Sammus is the alter ego of Enongo Lumumba-Kasongo. Raised in Ithaca, up-state New York, she’s spent a lifetime juggling other people’s expectations of her. An eighth year PhD student based in the Science and Technology Department at the prestigious Cornell University, she balances her hip-hop career with academic explorations of the politics of community studios (“multi-purpose music recording studios that are built with the goal of serving so-called ‘underserved’ communities.”) Her forays into academia inflect her lyrics with a precision and accessibility that deliberately pushes against the obscurity and vagueness of much academic writing.

The musician-academic role might seem incongruous, but it’s a mash-up that makes sense in the context of her upbringing and family life. Both parents were college professors who spent her childhood emphasising the importance of education, while her brother rejected the family’s sole emphasis on academic achievement and filled their home with music.

“Music spoke to me mostly because of my older brother, he’s a musician [Disashi of Gym Class Heroes], a self taught guitarist. And he would come home and kind of show us all of the music he picked up in middle school or high school. And I was his kind of mini me, so anything he did I wanted to do too. So I used to record music videos on MTV before he came home from school to show him all the things I had found. And in that process I started really deeply connecting with some of the cool stuff I saw.”

Throughout this period Sammus was experimenting across art forms, creating alternative worlds through story writing and drawing cartoons (she currently performs live wearing an arm cannon). “All these stories and illustrations for a TV series I wanted to have as an adult. And I didn’t know how to animate, didn’t know who you could talk to about making a series come to life. But I thought making the music for something like that would be easier, or more accessible. So my older brother ended up showing me how to produce beats on a computer. A digital audio workstation on the computer called Reason, and I just started making beats that summer in high school and just kept going with that.”

Early influences included Daft Punk and Bjork, who Sammus describes as “interesting, strange and untethered.” But it was Kanye West’s early-2000s work that really spoke to her, and prompted a move into the hip-hop genre. “I feel like him speaking about his experience made me think I could be an artist. That it might be interesting to explore my experiences too. So I started making bass beats, started rapping a few years later.” 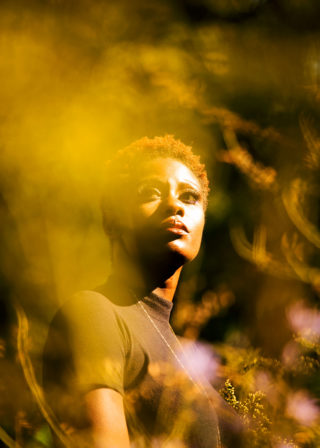 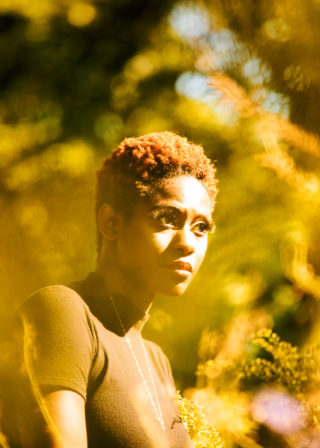 Sammus still produces all her own beats, and works pretty much solo, despite some high profile collaborations, including on Noga Erez’s recent single ‘Cash Out’, an experience Sammus describes as inspiring. Both because she was able to watch Erez curate her specific vision, and because it opened her up to the possibility of working with other people, a move she’d been apprehensive about before. “I think I was anxious about that because so often the credit is taken from women when they do collaborative projects. So I think my inclination has always been, ‘Nope. If I’m not working with somebody else then no one can say somebody else did this.’ But I have enough music to share and showcase what I can do. So I think this is really positive and made me think it was something I want to do in the future.”

Allowing her work to evolve organically, reflecting on and learning from the past, is a pattern that Sammus actively follows in her practice. It’s what has moved her from working with academic objectivity to sharing deeply personal material in her music. “I think initially, when I first started, it was like, ok, I’m going to talk about racism and speak about it with almost an academic distance. Like, ‘these are things that are happening in the world and I’m going to give you some examples of them.’ But as I progressed in my career and I had sort of emotional breakdowns and issues of confidence, and wondering if I was doing the right things, I moved inwards. And I realised that although I was doing things that were deeply personal it started to speak to the universal. In a way, like, being very specific in my experiences allowed folks from a wide variety of places to connect. Because it wasn’t necessarily the specificity of the experience they were connecting with. Although sometimes it was, like if I mentioned a cereal I’d have countless people saying, ‘Oh I love that cereal’, ‘or I watch that cartoon’, or ‘I do that too!’” She pushes her glasses back onto her face.  “I think in willing to be vulnerable that has seemed to speak to a lot of different folks who are struggling with that, or who are made to feel that their experience isn’t significant or isn’t meaningful.”

I ask if she ever worries that such personal material won’t connect universally, and she nods. “All the time I have anxiety about something being too particular. Or even being too personal or too raw. There have definitely been lyrics that I’ve edited out because I wasn’t ready to have that conversation yet. And that comes from experience, the experience of writing personal songs and realising that folks were really listening to what I was saying. And at the same time it was really exciting, it gave me a lot of anxiety. ‘Oh shit, I really have to be mindful of what I put into the universe’, and that once it’s in the universe, which is kind of the conceit of ‘Pieces in Space’, it’s not my property anymore. It’s public and universally consumable. I think a lot about what it means to release these very intimate moments into the world and part with them like you part with your kids or whoever. Watch them walk along the street and around the corner.” She smiles. “I just hope that the road will be gentle with them.” 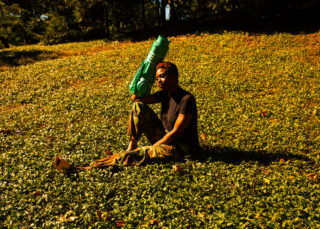