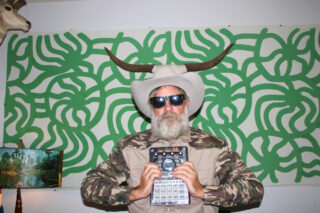 As cut-and-dry as an email interview can be, there’s always a hint of disappointment when a subject would prefer to stay off the phone. This was the initial case with Craig Clouse, the animating force and sole constant member of Texas-based psych-noise project Shit And Shine. His answers might be a little better over email, he says, and I’m not one to push for FaceTime in this instance. In the past Clouse has been known to wear a terrifying rabbit head during live performances, while every other press photo obscures his face in one way or another – dark sunglasses, shadowy composition, long hair, a big hat. A quick Google search brings up very few examples of Clouse’s interactions with music publications altogether over his 30-odd year career – I can count three online, all years apart. It makes you wonder if publications simply haven’t been interested, or Clouse hadn’t been amenable to them (“Interviews? Uuggghhh,” the Q&A from 2010 reads). Given that few artists in the US avant-garde noise underground are quite as storied as Clouse, I figured it couldn’t have been the former. After all, he once called Shit and Shine his “fuck-all-ya’ll” band.

He cringes a little at that phrase: “I guess that’s where my head was at at the time!” In fact, despite a daunting presence to match his history of mining a particular vein of noise-laden music with Shit and Shine – as well as with noise rock groups TODD and USA/MEXICO, the latter of which features Butthole Surfers drummer and frequent collaborator Jeffrey ‘King’ Coffey – Clouse shows more than a little insecurity about the accessibility of his work. He seems a little off-base with its appeal, when in fact even a batch of unreleased songs he recently put on Bandcamp did numbers. “I thought they were ok-ish and shouldn’t just be scrapped,” he says. “Nobody would’ve cared anyway [he thought]. That’s purely a self confidence thing. I’m super hard on myself.”

Self-criticisms aside, Clouse has carved out a unique spot in experimental music, one where his most devoted listeners are less concerned about any thematic cohesion between records beyond where Clouse’s interests might lie. He’s certainly skilled to have been kicking about this long, but one of his most appealing traits is that he approaches music with the fervour of an enthusiastic amateur. “It’s the way my weird brain works,” he adds. “If I wanted to sit down and make a proper techno record, I probably couldn’t figure it out. It would sound techno-ish but not proper. There’s always something not quite right going on.” It’s easy to see what he means: while every Shit and Shine release may have a vaguely psychedelic underpinning (though it’s “not trippy hippy” music, as Clouse is quick to point out), elements tend to collide in unpredictable and volatile ways, sometimes defined by the hardware and instruments Clouse is using at the time. This means an album like 2020’s Malibu Liquor Store is likely to shuffle dusty desert blues rock with the manic back-stepping energy of a D&B 12”, while others like 54 Synth-Brass, 38 Metal Guitar, 65 Cathedral throb and bristle somewhere between industrial electro and a beat tape that has been reconstructed after being run over by a tractor.

There are also those occasions where collaborators can influence the direction of certain releases, which casts Clouse less as the mastermind of Shit and Shine and more as a Mark E. Smith-esque custodian of a lifelong project. In a discography full of music outliers, 2015’s Chakin’ is possibly the outlier. While Clouse has always “dabbled in jazz” since wanting to be a jazz guitarist in his teens, Chakin’ is a low key, In A Silent Way fusion era throwback, born out of beer-fuelled sessions in his shed with keyboardist friend Nate Cross. They called the sessions ‘Tuesday Jazz Chat’, inspired by Clouse’s admiration of The Fast Show’s jazz club sketches (“Niiiiiice”). “That’s another record that surprised me for the reaction it got,” he says. “I was sure I’d get roasted for making a ‘fake’ jazz record.”

Then there’s the expansive guitar dirges, the latest of which is 2022’s Phase Corrected, a solo record-turned-band effort thanks to “bad bass genius” drummer Adam Hatley, who also happens to be Clouse’s next-door neighbour. “Do anything you like,” Clouse told him, “but try not to play faster than 30bpm.” These kinds of records have been a throughline of the Shit and Shine brand since the early days, and they’re probably the only good reason he can still be filed under ‘noise rock’ in most record shops. 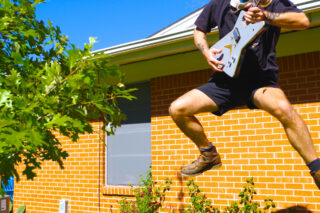 It’s true that there are Clouse releases that feel like the products of happenstance and luck, an aspect he readily admits about 2018’s You Were Very High EP, something of a watershed moment for the majority of his current sound. After weeks of sitting at a sampler loaded with anything and everything – Black Sabbath, Rihanna, Prince, Steely Dan and a host of audio lifted from YouTube clips (“just search ‘grumpy grandpa’ – you’ll find my sampling material”) – the record’s two sprawling sides come together like a hallucinogenic sonic miracle, a reality where ‘Let’s Go Crazy’, ‘Black Cow’ and ‘Bitch Better Have My Money’ are transmogrified into cops overseeing the arrest of a man destined to spend the night in the drunk tank on an episode of Road Wars. “I like the dialogue to be real,” Clouse says, speaking to his fascination with arguments and fights people inexplicably upload online, “and not all sort of um… positive cosmic decorations! That’s one thing [Editions Mego founder] Peter Rehberg pointed out when I started sending him music to consider for release. He always encouraged ‘less decoration’ which has been a hugely valuable piece of advice. That and to never worry about sample clearance. Ha ha!” Clouse counts ‘You Were Very High’ as one of his best recordings, and while it has the distinct whiff of an audio shitpost about it, sincerity comes before any ironic distancing Clouse may or may not have towards his material. “Humour is totally crucial,” he says. “I was hoping people would be like, ‘Prince solo over Steely Dan?! Ha ha! YES!!’ Sometimes I want to throw in instantly recognisable reference points because it’s relatable, and just to bring a smile to people’s faces.”

The ways Clouse has tried to instigate that joy has changed dramatically in live settings – where his set-up is now “shockingly minimal and simple by choice”, he used to orchestrate a certain level of spectacle with an Shit and Shine show. “We used to rent a massive fuck off van and tour with at least four drummers and two bass players, plus somebody on electronics,” Clouse says. “We would travel with a huuuge backline of vintage Orange amps and cabs. These days it’s just not practical anymore. The cost of renting a massive van and the petrol and road tax charges is insane, and finding accommodation for everybody. It got stressy.” It’s oddly refreshing to hear someone with a vision like Clouse’s run through the agonising cost of demonstrating that vision on stage, night after night. He embraces the malleability of his pared-back situation: “Touring with four drummers meant just playing one or two ultra repetitive things every night. We had to stick with a certain plan. I loved that but right now I’m more interested in playing several pieces of music per show and having much more freedom.”

It seems like audiences don’t mind it either. A live video of ‘You Were Very High’ shot at Sonic Protest Festival 2019, performed by Clouse and Leon Marks (“if you see us as a duo, it’s usually Leon and I”) on drum pads, samplers and mixers in a palatial country house, elicits more than a few smirks among the audience. One guy – who doesn’t seem too far gone – starts throwing some shapes too. It bodes well for the latest Shit and Shine album New Confusion, a record that Clouse curiously dubs as being “listenable”.

“I don’t always want to make antisocial music,” he says. “It gets to be so pointlessly miserable and self-serving.” It doesn’t necessarily start at that conventional level though – a stern therapist type says “you’re angry or annoyed” in a patronising, almost scalding way, as blown out fuzz carves out wisps of rhythm like Faust heard through the static between stations on an ancient car radio. However, the bulk of the record has, in Clouse’s words, a twisted “yacht rock” vibe – it’s not unlike J Dilla when you think about it, such that the likes of ‘Miami’ and ‘Shipped’ wouldn’t feel too out of place on a beat tape. If Clouse set out to make an ‘accessible’ Shit and Shine release, mission accomplished.

Though the singular nature of any given Shit and Shine record is the element of surprise, the difficulties of being such a changeable act are not lost on Clouse. “Honestly, it can get frustrating because there are times when I’d like to have a go at playing it straight and actually fit into a certain genre for a change,” Clouse says. “I’d probably get booked to play live more if people knew exactly what to expect. But fuck that. I’ve embraced not understanding how to make proper music!” As it happens, Craig Clouse is more like an underdog sports team than he is the brooding individual I had anticipated – easy to root for. Even the thought of a ‘playing it straight’ Shit and Shine record emerging someday is enough to anticipate what comes next.