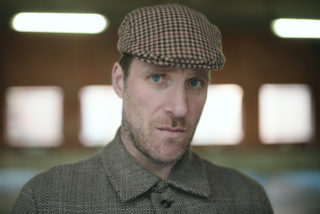 Sleaford Mods first appeared in Loud And Quiet in August 2014, with singer Jason Williamson aware of the music industry’s fickle nature. Media interest will dry up; he was sure of it. And then, he asked, “how do you keep making your lolly?”

It’s now three years and two albums later, and papers like The Times are covering Sleaford Mods at The Roundhouse. The music of Williamson and producer Andrew Fearn endures, he says, because all other music is still so crap. But that discredits Sleaford Mods’ own actions and their unique take on British working class post-punk – Fearn’s bloody-minded use of an old drum machine and Williamson’s vicious, yammering half-raps about life in the armpit of a city. Sleaford Mods’ humour is their own, too, and their sense of social duty, which is why their new single is called ‘B.H.S.’ and why its video features their mate John dressed as Sir Philip Green and slovenly falling about a yacht, bloated by champagne, greed and other people’s misery.

Considering these gloomy socio-political times, perhaps Sleaford Mods’ continual appeal isn’t so surprising after all, but perhaps that’s as overstated as Williamson’s reputation is misleading. His words, never minced and always entertaining, can, written down, appear inflammatory for the sake of it and heavy on bravado, not unlike those of Liam Gallagher. On meeting him in the duo’s hometown of Nottingham, though, Williamson, a family man accompanied by his 1-year-old son, is balanced by a British modesty and a sense of belief that is more American, and can maybe be attributed, in part, to his teenage love for American hip-hop, where confidence and arrogance aren’t the same thing, and where a straight question receives a straight answer.

“My kids have really sorted me out”

Unless you want to be a shit dad, that’s the only option, to get on with it. My daughter thinks that every dad is a singer, but she’ll soon figure that out.

We stash away whatever we make, because of the kids. And when you’re older… I mean, for the first two years I was spanking it – boozing, sniffing – and then I stopped completely. I don’t really do anything now, so that saves a lot of money. We get a holiday every year, so it’s not bad, y’know.

Andrew lives on a narrow boat now. He used to live in a dingy old flat up the road: a horrible thing. I used to go around there and it used to break me. I ended up loving it, though – it’s where we recorded the first three or four albums. When we started making some money he bought a narrow boat, so he lives on that, going up and down the country. It’s really changed him. It’s been a release.

They’re not stupid over there. You’d think that you could probably get away with a little bit more, because they’re not too akin with what goes on in England, but they are. They like to ask me what I think of this band and that band, and a lot of them seem to like the bands that I really can’t stand, so I spend a lot of time explaining myself over there.

They don’t really get the references in our songs, but it didn’t hinder me when I was listening to hardcore Mafioso rap from the East Coast when I was growing up. There was just something about it that connected me to it, and I think that’s what they get from Sleaford Mods. Particularly in Germany. That’s where we made our name, first in Belgium, then Germany and through to France. We were getting booked all over Europe from 2013, and then we started to get shows in London, then the North and finally Nottingham started to take us a little more seriously, but hesitantly. 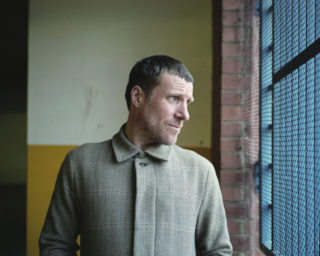 “We were considered a joke in Nottingham”

Nobody wanted to know. Then we started to get into magazines and things started stoking up. Now that we’ve got somewhere they’ve taken us under their wing. I mean, I can’t blame the Evening Post for not following it from day one, but the local promoters didn’t give a fuck. Now it’s like, ‘Oh yeah, I remember them.’ Fuck off. We did it all by ourselves. We sold out Rock City without anyone’s help and they couldn’t understand why. It was a really nice feeling because for years we were ignored and looked down on, and for once someone turned it into something all by themselves without having to compromise, totally through their own set of beliefs.

“Ideas are what keep you going when nobody else cares”

With Andrew it wasn’t as desperate, but when I was doing it on my own it was terrible. But what kept me going was that I’d get another idea and think, oh, I’ll try that and see what happens. Sometimes it would work and sometimes it wouldn’t and something would push it to another level. And it was easy to maintain, because there wasn’t a band – just me and whatever idea for a backing track I had. When Andrew came along he wouldn’t gig with me, so I was still using his tunes on a CD as a backing track. It was essentially the same but with original beats rather than samples.

“How are you supposed to conduct yourself in the street?”

Initially you get a buzz out of being stopped in the street. I never thought I’d get anywhere, ever. And now you take it for granted, people saying ‘alright?’. I know it sounds wanky, but how are you supposed to conduct yourself? I went through a period of feeling a bit guilty about it, people stopping me, and me saying hello and then forgetting about it. Before it was like, ‘oh wow, who am I? I don’t deserve this!’

I’ve been feeling like that since they first got interested. Because papers like The Guardian, they’re so, like… [mimes snatching at the air]. Fuck that! And it’s better to think like that – that people are going to stop talking about you in the press – because as long as the music is interesting people are going to be bothered.

I reckon we’re still one of the most interesting bands about – y’know, without being a wanker. I listen to music everyday, and try to listen mostly to new stuff, and I think we’re on a par with anyone that’s perceived to be worthy of the moment.

We’ve not gone up our arse, and it’s still the same. To be honest, after ‘Key Markets’ I thought, well that’s that. Because where do you go from that? I was weary of just going on about the same old shit, as Noel Gallagher put it, ‘ranting about fried chicken’, or whatever. But it always comes back in a different way; there’s always something else you see.

There are a few more songs on this album. I think, for me, that makes it feel like it’s moved on and is still going, but most of the time I’m waiting for it to collapse, because there’s so little to it.

There’s a lot of stuff that’s make-do. It’s alright; it’s ok. You’re thinking, ‘yeah, that’s alright, it’s not bad’. Eventually you start humming it and think, ‘yeah, that’s ok, I’ll buy it.” But there’s nothing that fucking knocks your head off and makes you feel alive – really alive. And I’m not saying that we do, but I think we echo that idea a bit.

I come from the era of the mid ’90s, where there was always something coming out of the bag, like ‘Woah!’. I can’t think of anything other than grime that has that ‘oooh!’ and even that is tempered now. I heard that Skepta had a burning car onstage at Alexandra Palace. I don’t know if that’s true, but if it is, that’s done. Like the police-line-do-not-cross tape around Guns N’ Roses’ set at Wembley. Fucking done!

Maybe it’s my age. And I’m such a fucking mardy bastard. I tend to analyse stuff and make judgments on stuff, and I think, well, I don’t reserve the same judgment for myself sometimes. 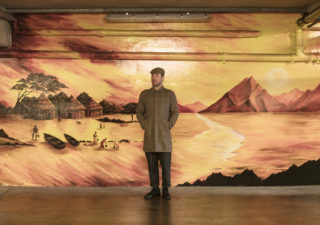 We got criticised for the ‘B.H.S.’ video. ‘Look at you with your social commentary.’ Fuck off. What are you supposed to do? People are never happy, are they.

Every time we’re in the papers we get a load of shit, and we’re generally hated by the guitar crowd a lot. They think we’re a couple of scumbags. And it’s also jealousy as well. People always thinking, well, I could do better than that, and, actually, you probably couldn’t. I’ve put myself in that position, and you’ve got to have a message that is obviously intelligent, but it’s got to be communicated to people. You can’t be too up your own arse. If I was to quote something out of a critical theory book and put it over a beat, it’d just sound stupid.

That’s a line on the new record, in ‘Just Like We Do’, and it’s really true. We hate it. When mates say, ‘I’m really proud of you’, I think, god, I would never have said that to you. There’s another line in that song about people complaining that we were going to some awards dos. But these people would love to do it. Some people don’t talk to us anymore because we’re bigger, and I can see where they’re coming from because I used to be the same, and I say that in the song. But it’s so boring, and such a crap part of our personalities – people saying, ‘oh look at them now; I saw him in town the other week with a fucking watch on’. And I’m not very good at taking criticism. I get really wound up and can be quite horrible with it. So these are great things for songs, because you can get them out, and I feel like the backbone of Sleaford Mods is that.

“I got my sense of humour from shit lunchtime comedians”

Freddy Starr, Russ Abbott and Tis Was. My sense of humour is from the ’80s, and shows like ‘Allo ‘Allo, which actually bordered on racism. Pure shit comedy. They were so crap, and misogynistic, which I obviously don’t centre on, more the feeling that they gave off – just so crap! We mention a few of those in the new album.

There’s a song on there called ‘Moptop’. That was originally called ‘Moschops’, after an ’80s kids show. I searched it on YouTube and the first thing that came up was this guy going, ‘Do you mind!? You just biffed my nose!’ I thought, that’s brilliant, I’m having that. So that’s how that song starts, with me doing that impression.

I suppose I could approach one in a more constructed way. It wouldn’t have to be like Pharrell. But this time around I wanted to do something with a loose structure of grime, and I think ‘Drayton Manored’ echoes that a little bit. Generally speaking, as long as it’s funny as well as bleak, that’s what we’re after. And immediate – that’s really important, to give an impression of the here and now. Because we’re living in such horrible times at the moment, it really does need communicating. I feel like singing about frivolous things like romance at the minute, there’s a time and place, and it’s not now.