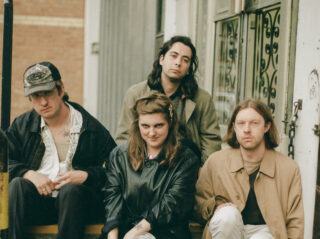 Josephine M.K. Edwards, better known as less-than-sanitised hardcore punk matron Sister Sniffany, is fed up of the sort of benign innocence often associated with feminine stereotypes. “[It’s about] all the worst, most humiliating and shameful things about being a girl and not being proud of it,” she says, talking me through the creative drive behind her band, Sniffany & The Nits. “I’m sort of against being proud of girliness. Don’t get me wrong, girls are awesome and I hate men. But I believe girls can be extremely evil in ways far more interesting than boys can be. There’s just loads more to talk about.”

Huddled inside the band’s makeshift rehearsal space, it’s clear Sniffany and bandmates, who include members of Joanna Gruesome, Ex-Vöid and The Tubs, have been friends for some time. “It’s not an Amyl and the Sniffers reference,” jokes drummer Owen Williams; they’re keen to be quite clear on that.

“I had a zine ages ago called Sister Sniffany’s Chamber Pot. It was mostly just drawings and comics and stuff,” explains Sniffany. “I wanted to have a name like Tiffany, but somehow even snottier and more snobby. So Sniffany kind of works. There’s really no reason other than choosing something as horrid sounding as possible.”

Touted as ‘deranged’ and ‘genuinely troubling’, it’s a name that more than fits the bill. Sniffany & The Nits’ music is mostly fast, potent and deadly. “I think unfortunately, I’m too much of an overpowering force,” laughs Sniffany, gesturing towards her bandmates. “They’ve all been in other bands before me which were somewhat more collaborative. But I wanted to really stick my nose in the artistic direction of this one. It’s very much my ego project.”

She’s not pulling any punches either. Written and recorded throughout lockdown, whilst the band were isolating in an abandoned south-east London care home, their incoming debut album The Unscratchable Itch sees Sniffany awaken a maniacal energy that she suggests lies dormant within the female psyche; an evil so pure that it makes toxic masculinity look like a frilly table-clothed tea party.

“All my favourite films are about women doing evil things over and over again. I wouldn’t say I’m a bad person, but I’ve always been drawn to those things because there’s more truth in it. All my lyrics tend to mix the sort of repulsion nobody ever associates with hyper-femininity. There’s nothing else I find as interesting.”

These vignette-like outbursts come spoken through a revolving door of unhinged characters, each plucked from the murky depths of Sniffany’s imagination. A woman tails her husband to a Vaseline-smeared swingers party. An enraged grandmother’s glasses fog up as she brutally chastises her granddaughter. They’re all pretty grim, to say the least.

“I’m a chicken dinner. I couldn’t look thinner,” chants Sniffany, reciting lyrics from the band’s new single, ‘Chicken Liver’ in childlike, sing-songy fashion. “It’s a song about wanting to be as close to something as possible, but also the sort of envy and jealousy that breeds hatred against other women. Snapping seamlessly into character, she mimics, “I’m the thinnest, most gorgeous one. How can I look better? She’s spread and butterflied like a raw, pink chicken dinner.”

For the rest of the band, their task has been to develop a no-holds-barred style of punk and hardcore music that’s both deafening and twisted enough for Sniffany to unleash her demons. They all appear to be unconditionally committed to the role.

“We don’t tend to put too much pzazz into writing the music; it’s essentially about setting a spooky vibe and making space for Josie [Sniffany] to do her thing,” explains guitarist Matt Green. “I’ve never thought to ask what a song is about or try to decode what we’re doing.”

Reminiscing over early jamming sessions that sounded more like playground chants than actual music, bassist Max Warren reflects on how lockdown restrictions helped steer the direction. “For me, the most enjoyable thing about hardcore is the experience watching it live. So during those times when we weren’t going to shows and feeding off that energy, it felt a lot harder to write music because of how synonymous it was with gigs.” The result is a perfect balance between music and dialogue, retaining the visceral noise but leaving enough space for Sniffany to scrawl upon.