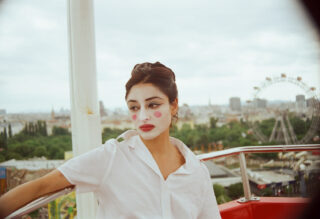 A harlequin pirouetting through New York, Paris and Vienna

Sometimes, it feels like it’s Sofie Royer and her keyboard against the world. She’s been  a concert violinist, a DJ, a founding member of Boiler Room and a music industry executive for her current record label Stones Throw; to brand her a modern-day renaissance woman feels like a short sell. Now, she’s a singer marauding in Pierrot makeup – a paper white face and apple red cheeks – performing a wretched waltz through Viennese squares, Parisienne streets and New York dive bars along to songs about debts accrued at racing tracks, assuasive colours on a paint chart and the steadily-snowballing police state.

Her delivery is almost karaoke-like, the moment your favourite sitcom protagonist breaks the fourth wall and speaks directly to you, both jarring and mesmerising. Sofie’s self-produced debut album Cult Survivor had the same taking-the-mic approach; it’s like listening to half an hour of a friend’s well-told stories of surreal heartache, feeling unsure as to whether to chip in. Two years later, on her new album Harlequin’s lead single, she’s getting married to the music video’s director within the music video. All the while, the two apples on her painted white cheeks make her look like a mechanical ballerina from an old-fashioned toy box.

“I feel more protected when I put the make-up on,” Sofie says, sitting on the floor of her mother’s house in the Alps, nestling against the foot of the sofa. “It’s a nice way for me to be able to separate being on stage with real life. There’s something really interesting to me about performing and being able to convey so many emotions at once. I was bored of the traditional way in which musicians would perform as normal musicians, you know, without any theatrics.” She pauses on her words a little. “I think I’m more interested in marrying these different disciplines as an artist and conveying that in my performance. Not just standing there mumbling words into a microphone. I think that would really bore me.”

It’s a look that’s gone beyond her album artwork; she’s adopted it on stage for the few occasions that she’s managed to perform between lockdowns. “I think what’s interesting to me, not only about the character of the Harlequin but also about the Pierrot – the sad mime, the clown – these figures and archetypes kind of embody both the trickster and the pantomime. You know, you can be this entertainer but you’re also kind of a swindler, there’s a bit of mischief. Pierrot’s maybe the sad clown and Harlequin’s the cheat. I really do identify with them both. I think the interesting thing about it is the duality. But a large part of why I choose to do it like this is also just to entertain myself,” she laughs.

Her philosophy is such: a wrangled self-assurance that twists its way through the most ordinary anxieties. Her music is a constant coming-of-age that plaits the assured indestructibility of youth with a torrid navigation of its undulations; she fondly refers to it as the Holden Caulfield-ification of her existence. And these contradictions that live within the faces of sad clowns, depressed entertainers, bards of the bedsit and poets of pessimism are contradictions that live freely in Vienna, too. Sofie’s spent many of her formative years there and is based there now, studying Psychology, Philosophy and English as a Teaching Degree, and painting at the University of Applied Art.

“I really enjoy living in Vienna,” she says. “I think there’s some semblance of being creative without having so much external pressure. There’s less of a scene there, especially musically. I don’t have a lot of peers in Vienna, which has its upsides and downsides. I’m able to develop in my own direction… these past four years have been significant for that. Without having the outside influence of where I used to live: Los Angeles or London or New York or Paris. But I have enjoyed being in Paris more recently and being able to work more there too.” 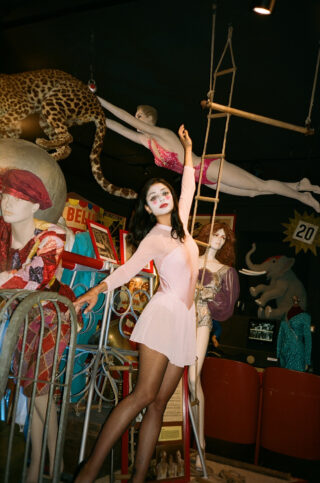 My own familiarity with Vienna doesn’t extend beyond a couple of casual visits, stuck in the sickly glaze of Mozart and Klimt honeypots, a Leonard Cohen song that cites ten pretty women and a tree where the doves go to die, and a lost memory of Adam Baker stealing my Viennese whirls in Year Two.

“For sure it’s haunted by its traditions and its history,” Sofie says, “but I really enjoy Arthur Schnitzler, Thomas Bernhard, and a lot of significant authors that I think have really mined the Austrian tragedy over the years. It’s an antiquated space but there’s a lot of interesting information and history to delve back upon. You get the tourist exploits, sure, but it’s like going to London and seeing the Queen and Buckingham Palace.”

A lot of the songs on Harlequin are grounded in place and experience. ‘Love Park’ is a park in Philadelphia, ‘Feeling Bad Forsyth Street’ is set on Forsyth Street in New York. “I think beyond just Vienna I write songs as a means of dealing with experiences I’ve had,” Sofie says, “they’re here and they’re there but they’re always somewhere.” As a polymath, Sofie has had to redefine her own space, too. She’s said previously that she’s never thought of herself as a singer in the way that a lot of pop stars are singers, but laughs when I bring it up.

“I guess I really have to pack that sentence up and never say it again,” she beams. “We’re two records in and I keep telling people I don’t even sing. I think it’s because I feel like a musician first and foremost; I didn’t grow up singing much besides in church and the choir, but I was never a soloist. My primary access to music was as a violinist from a really early age. To then just be called a singer-songwriter almost doesn’t do my history and dedication to music justice, because I know a lot of singers who don’t play any instruments, don’t write their own songs, don’t produce their own music. I think I might have felt a little reticence there. But it might be time to retire that given it is what I’m doing on stage.

“I had a show of paintings in Salzburg a few months ago,” she adds. “When I was making a lot of these paintings, it almost felt like the more clarity one has in their art, the more that almost slips away in what we think of as reality. This ability to be able to express yourself, to tap into what it takes to be a creative, definitely comes with a price. Honestly, what the hell am I doing sometimes?”

It’s not a rhetorical question so much as it’s a genuine wonder. But what she’s doing is distorting a tradition of leftfield pop music in a way that feels genuinely timeless. Harlequin is an alt-pop masterpiece in the least dramatic sense of the overused word; at times it conquers the wistful surf-rock of George Harrison, yet still confounds the void between the New Romantics and reappraised sophisti-pop with all the character studies of Jane Birkin.

“That’s the one thing I really do stand behind with the music I’m making,” she says. “I’m not necessarily trying to make music that’s for today. I want people to listen to it in three decades and it still bangs like Steely Dan or Todd Rundgren. I really just want to make beautiful pop songs.

“That’s the whole thing about being a musician, why it’s so nice to hear you say that in Sofie and her keyboard against the world, I’m winning the fight… because I don’t necessarily feel that way. I don’t even mean to sound jaded but it’s kind of a burden. I work to supplement my income. I am a really Sensitive Sally. I need more downtime but I don’t even know if that’s true because I work so much. And when you’re in the thick of it, you never know how it appears externally.”  She lets out a prolonged sigh, which melds into a smirk, as if hearing her grievances for the first time. “To me, I’m just thinking that this is the weirdest struggle I’ve ever had, you know. Taking all this burden on for what? To be a clown on stage? It makes me well up thinking about it. Sometimes I lie in bed at night with total anxiety thinking I’m sacrificing a regular life just to be a clown? But then you do have affirming moments… When I’m on stage performing, it’s maybe the best thing ever.”