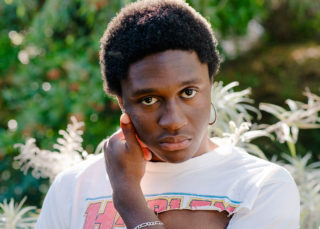 "A lot of my taste is from the internet, and the people I look up to now are just as old as me.”

You know the introduction: now the story of a wealthy family who lost everything, and the one son who had no choice but to keep them all together. Remove the banana stand from every episode of Arrested Development and add in a transit van trailing across the United States. Remove the disgraced Bluth family and add in a guitarist named Kyle who refuses to take off his neck pillow until Spencer Allan, musician and star of the show, pretends to strangle him. Remove the surreal narrative that ends up discernibly paralleling modern politics, and add in the same guy in a neck pillow exclaiming he is only allergic to baloney and “all of this stress”, as he shoves the final mouthful of a three-meat sandwich into his mouth, lying horizontally across the back seats of the van.

This is the pilot episode of Van TV, and like any good reality television show, it doesn’t make a huge amount of sense. It’s the first in a series that the latest addition to 4AD’s roster, Spencer., has pioneered from the slow-paced days that punctuate life on the road. The first big plot twist to the action comes when Kyle, neck pillow around his neck, slowly walks in front of the television propped up on the backseat, where the rest of the band are playing video games. “Why did he do that?” read the subtitles, correcting the former image of a group of friends that all got along with each other. The deafening silence is finally broken when they drive past a huge truck and become star-struck by the size of the vehicle’s tires.

“It was just this really dumb idea we had, to make a reality TV show based on what went on in our tour van. It’s a lot of improv. It’s kinda funny,” laughs Spencer, aware that he’s released as many episodes of this soft-hitting new drama as he has songs on his new label. It’s broadcast on the yet-to-really-take-off IGTV, and maybe this could be what the platform’s needed. Gracefully somersaulting himself from the backseat to have a serious chat with the driver, Spencer.’s sincere expression is a constant ‘pleading face’ emoji, staring at a miniature puppet of Beaker from the Muppets, that occasionally makes its way into the camera shot. “You didn’t really need to bring up the tires, you know we’re all upset about the tires.” 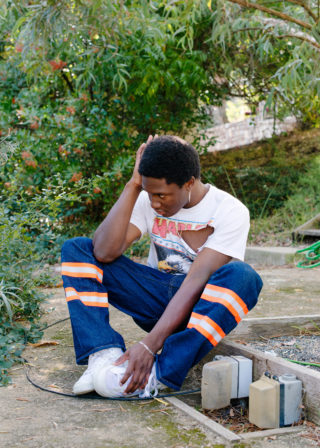 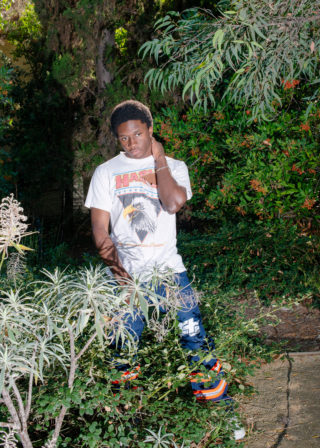 There are no such distractions this afternoon, despite the long drive they’re making from San Francisco to Los Angeles. It does give way to them bathing in precision, though. A simple question of how far through this tour they are leads to a panicked shuffling of papers within the van as the band count through the tour dates one-by-one. They are eight days in, supporting Gus Dapperton, one of the most exciting acts in a new DIY dream-wave of indie music. Gus’s own career is exceptionally visual, and his fan base emphatic. In one song he’s played to both the meme generation and their digital dissatisfaction, comparing the breakdown of his former relationship to going out for a meal with someone who just wants a snack. It’s called ‘I’m Just Snacking’.

“A lot of Gus’s fans are really open minded to our music,” says Spencer., excited by the reception he’s receiving as the support act on the road. “They definitely pay attention to the opener – they’re really appreciative. You kind of expect now that a lot of people go to shows and miss out on the opener, and that’s just how it is. But for us, we’re really lucky with Gus’s crowd, they’re super open to wanting to watch us and they’ve started feeling like our own fans pretty quickly.” There aren’t any murmurs from the van, which seems to give him a nervous confidence to continue. “It’s been really great actually, like the bands all get along. I’m getting more comfortable performing each night too.”

It comes back to this seemingly unimportant Van TV, yet again. Gus and Spencer seem to have formed a friendship that fans can invest in on the social sphere, whether it’s cosigning each other’s merchandise table, or making a cameo in each other’s live sets as hype men-come-limp figures for the other to throw into the crowd. It’s not so much a stage dive, as it looks like one man getting rid of a dead body. “Anyway buy tickets so I can hopefully land on You,” tweets Spencer to promote the next show.

Their friendship was formed digitally, when Spencer moved to New York City at the close of 2018. “Gus was already living there and I saw he posted on his story about an art gallery event or something, and I was like, ‘oh this could be a good opportunity to meet him.’” He ended up playing him his music and they both started hanging out. “We’d go out a lot of the time on weekends with each other and eventually became friends.” I ask which show has been the standout so far, and quick as a flash he says: “Portland. Portland’s been the best so far. Portland was awesome. So was Chicago, so was Seattle. All those were the biggest shows. And I’m very excited for LA.”

You realise quickly that all of this is still very new for Spencer, and it’s all a little far removed from where he grew up in Rochester, New York State. “Yeah, that’s a huge impression people have. Like, when you say you’re from New York, people think New York City. Rochester’s like a four hour drive up North from there. There’s a small city but it’s much more suburban. It’s not as connected. I grew up in the suburbs – there’s definitely a music scene but it’s low-key.

“Rochester has a lot of pride in its arts,” he adds, talking me through the Eastman School of Music, the Institute of Technology that places a lot of weight on art, film and photography, and the jazz band that he played trumpet in through college. “There’s this huge appreciation for art and culture everywhere there, but it’s weird, there’s just not a lot going on.” 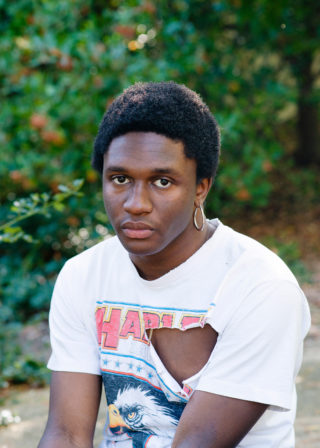 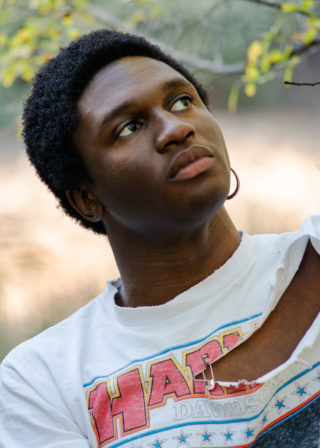 It was only almost exactly a year ago that Spencer told his parents he was dropping out of college to give music a try. “It was very like, I mean, they were definitely thrown off by it. I intentionally botched my lessons because I was worried my parents would send me back regardless. They gave me like a year’s time, and said if it doesn’t work out within this year then you’ve got to go back. In that final year I really didn’t do a lot of work; I was focusing on making music and what my next steps were in terms of the career I wanted to have. In class I’d always just be writing down what I wanted my stage setup to be for shows, my goals for that year and whatever. It was always kind of what it was about.”

His first single ‘Automatic’, from a new EP scheduled for early next year, has only been out for a couple of weeks at the time of writing, but it’s already clocked up a few hundred thousand streams. You can’t see the invisible hand beckoning him back to economics class soon. It’s built around a propulsive drum loop that makes Spencer’s melancholic lyrics on unrequited love sound straight out of Steve Lacy’s Apollo.

“I think it’s only the second song I’ve ever collaborated with someone on,” he says, talking again about how the opportunity stemmed from an Instagram DM. “The internet is just a tool, man. A couple of weeks after I met Gus, these guys Beshken and José Benjamin Escobar asked if I was interested in coming to New York City. I got lost in the day and we had to reschedule. It got to about 9pm and yeah, I just walked in and they already had shit going on. I really fuck with those guys. They had this drum loop that they were playing and we just started messing around with it. From that day I had the sample of ‘Automatic’, and then in July I went to LA and re-recorded it.

“Playing live has always been my favourite part of it, though. I’d always see my idles playing these really big rooms and becoming friends with each other and collaborating. I just want to be in the same space as people, that was my idea of success,” he says, telling me what would have stopped him returning to school. Cosigns from Brockhampton and Omar Apollo followed his breakout song ‘Want U Back’, self-written, recorded and produced, transformed live by the four-piece band that shatters any image of the solitary bedroom Soundcloud artist as just one person and their Macbook. Spencer’s recruited a whole hostel full of bedrooms.

For a second he speaks very resolutely, still not breaking the laid-back voice at the end of the phone. “In my strategy to make a music career I was looking at Steve Lacy and Omar and seeing how they were interacting with fans online. It’s some sort of formula, I don’t know. When I was younger I was listening to a lot of older records, like Erykah Badu and Maxwell, and my dad put me onto a lot of RnB and gospel at a really young age. It was mostly about talent then, I guess. Now it’s kinda different. A lot of my taste is from the internet, and the people I look up to now are just as old as me.”

The great instant gratification salvo of internet culture can be a burden to a young musician, but Spencer is enjoying it. “In a way I think you can control how much you want to give away to other people. I can see it being intrusive if you’re Billie Eilish, you know, and people are seeking out details. But I feel like for the most part I have control over what they’re putting out. It’s fun, man.”

We end the conversation, coming back again to Van TV one last time. This is what he’s choosing to give us just now: a rolling credits scene where each band member has the word “van” in their name (Dick Van Dyke), and a “thanks” to Michael Cera for the music.