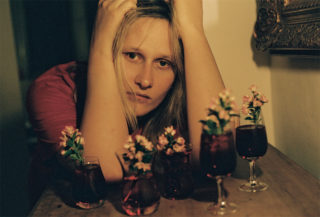 “I wanted to create something that was a nod to those people who got lost in the cracks of music and life.”

It feels like nowadays, in the age of social media marketability and lightning-quick digital journalism, every artist on the come-up needs a buzz-worthy story. For Melbourne-based musician Spike Fuck, an in-your-face choice of stage name (“which was a joke initially but somehow it stuck”) and honest treatment of issues around addiction, gender and sexuality create a ready-made, clickable narrative. Yet, with fashion designer Rick Owens already among her fans and the 2016 Smackwave EP garnering a devoted online following (and full release last month via Partisan Records), it’s her music – rather than her bio – that has drawn the real attention. Flitting between styles including dark country and ’80s-inspired post-punk, she delivers diaristic accounts via rough and raw sonics.

But what led Spike Fuck to music infamy? “There were two distinct periods in my musical career and life in general,” she begins, speaking over the phone from Australia. “Prior to changing my name to Spike Fuck, I was advertising online, like, ‘I’m a versatile singer-songwriter and I can play your weddings’ – so I was looking down the barrel of a career as a guitar player for hire.” The next period of her life took a somewhat darker turn from the doldrums of a stalling musical career, into developments that have inspired her output to date. “Then, I basically had a long period of getting into drugs, which was just awful. But returning to music after all of that I realised I had something to say and an important perspective.”

The idea of music as therapy, of pouring your heart out into your lyrics to offer some kind of catharsis or emotional release, is a common one; particularly with the likes of Ariana Grande dominating the charts with tracks that do just that, albeit with a glossy pop filter. Besides the obvious sonic differences between the two artists, Spike Fuck’s musical output is less her own form of talking therapy and more the natural output of someone that’s “pathologically honest” by their own admission. “Music has always been my main outlet for life matters,” she explains. “I’m never going to write a song like Bruce Springsteen; what’s the good me trying to write about somebody else’s position? I’ll write about my own direct experience, for better or worse.”

Whilst she’s clearly not a fan of Springsteen’s work, she’s much more favourable towards psychedelic rock musicians like Roky Erickson, or the equally elusive until his death, Scott Walker. Their appeal for Spike is maybe not what you might initially think. “I’ve always been interested in people who have been on the edge of reality,” she says, “and people who grappled with fame or the promise of fame and money and then fucked it up.” It’s this sense of thwarted potential that she wanted to honour with her music, rather than any specific sonic quality. “I wanted to create something that was a nod to those people who got lost in the cracks of music and life.” 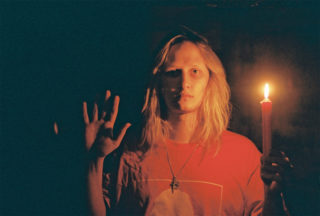 Due to her own experiences, she felt something of a kinship with artists who made music while struggling with mental health or substance abuse issues, and didn’t feel an obligation to gloss over the tough elements of their experience. “You gravitate towards the people you feel quite akin to. I never glorified them,” she notes. “I never thought these musicians were amazing, or anyone in the public eye for that matter. I just saw that there was a lack of pretence to these people.” It’s for this reason that she hasn’t shied away from putting so much of herself into her work, and why she knows that she can experiment in terms of genre and style, as long as she maintains a core sense of authenticity. “My music isn’t unique – nothing is,” she says. “But there’s something in the way that I tell [my story]. I don’t think my appeal hinges on any sonic element, so I don’t need to stay in the box of what I’ve done before.”

However, she does feel like some of her previous artistic choices, and specifically the way that people reacted to them, might be boxing her in. “I was being clickbaity, I’ll admit, with the name and the frankness [of my lyrics],” she says, in a manner that is alarmingly casual in its self-critical tone.

I can’t help but wonder if this is a genuine reproach or an impulse to pre-emptively silence the kinds of criticisms so often levied against female artists – whilst everyone from Grimes to Beyoncé has been attacked for being overly provocative or, worse, “attention-hungry”, their male peers are able to sidestep so much of this superfluous chatter. Understandably, Spike is keen to push past preconceptions such as these that cloud listeners’ perceptions, of both her and her work. She says: “People tend to just think of me as the ‘heroin musician’ but that’s only reflective of a certain time in my life.”

There’s an inevitable fissure between her realities as a human being – particularly one who has experienced trauma – and her presentation as an artist. The vulnerability of her lyrics, drawn from the pain of losing years of her life to heroin, speak of her own truth and the truths of a wider society damaged by the opioid crisis and pharmaceutical companies’ greed. These truths are delivered, however, via a performative, artistic persona presented on Instagram and other digital platforms, and it can be hard for people to tell where the line is drawn between art and actuality. “On Instagram I would do these really lengthy stories and people never used to know if I was being serious or not,” she laughs. “It got me in a bit of strife from time to time.”

It’s a curious tension between authenticity and artifice; one that’s initially hard to wrap your head around. The Spike Fuck you might see at a live show is a “character” inspired by performance art tactics, but through that fiction greater truth is able to emerge. “I was dating someone in the art scene and got involved with that scene,” she tells me. “It was cool to meet people from that side of things, and it made me see music from a different perspective. I have an aversion to the ‘pretentious’ art thing and the ‘pretentious’ performance art thing but I realised I wanted to create a character who would make it possible to tell my story with as much honesty as possible. It began as me with a computer doing karaoke.”

However, she’s keen to point out that “there’s a difference between my personal self and my outer self”.

At the heart of every artist is another person who deserves kindness, just like the rest of us. This is something Spike Fuck wants to make sure no-one loses sight of, even as she reaches higher levels of renown. “I just want people to see me as normal. I don’t want to be a novelty, I don’t want to be a freak. I just want to be a normal, well-adjusted human being. Try as I might, I might not get there, but it’s what I hope for.”