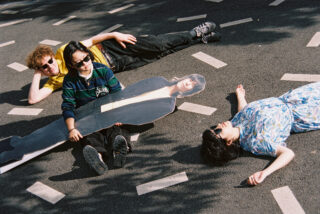 "I just try to be myself as much as I can, because if I’m not being myself, I think it drives me even more insane”

Superorganism were born in an explosion of colour. It started with a song: a bouncy millennium-era throwback called ‘Something for Your M.I.N.D.’. Its lo-fi production and deadpan vocals, courtesy of then-17-year-old lead singer Orono, thrust the electropop collective into the kind of stratospheric rise to fame usually reserved for big-budget pop acts.

It was immediately picked up by major music publications, and not long after received spins from Frank Ocean, Elton John, and Ezra Koenig. Suddenly, this group of internet friends – some of whom had never met offline – were bona fide stars with an underground hit.

“I’m still in disbelief, it’s just surreal,” Orono reflects in a video call to discuss the group’s second album World Wide Pop. She recorded ‘Something for Your M.I.N.D.’ from her high school dorm room in stops-and-starts while her roommate used the bathroom. Now in her early 20s, she’s touring the world and singing on tracks with Stephen Malkmus and Gen Hoshino.

World Wide Pop is bigger and louder than its predecessor, teeming with tongue-in-cheek bravado. But creating it was a more spun-out process than the first go-around. As early as summer 2019, the band stated in interviews that they were hoping to have their second record ready within months. Not long after, their plans came to a screeching halt along with the rest of the world.

Guitarist and co-producer Harry says the unexpected delay of the pandemic gave them time to tinker: “You get into a situation when you’ve got no end date for making a record. If you put artists in a situation like that, we’ll just keep working on it and writing new songs.”

Orono also spent the better part of three years working on a piece of art that would eventually become the album cover. It depicts a group of people raving in outer space while streams of colour erupt from Planet Earth. “There’s a whole other painting under it,” she teases, “but you gotta buy the record to see the full thing.”

“The evolution of the art in a way matched the evolution of the record,” Harry continues. “It got more and more detailed as time progressed.” World Wide Pop started off as an album about Superorganism’s global tour, but grew to include the pandemic and them reckoning with their new-found fame. It’s a collection of snapshots from a tumultuous period in their lives.

One of the biggest changes that occurred was a metamorphosis of the band’s line-up. Several previous members have left the group; for this record, Orono and Harry were joined by Tucan, B and Soul, each member making a range of different sonic and creative contributions.

“We’ve always had this vibe of being a band from lots of different countries where people will go off and do their own thing,” a zen Harry says. “The shape is, and always was, intended to be fluctuating.”

Around the release of Superorganism, a hot topic in interviews was the small London ‘production house’ seven members of the band had recently moved into. This too was short-lived. “It was really fun living there together, but it was such a pressure cooker,” Harry confesses. “All of us are the kind of people who, even though we work really well together, need to have our own space.” Luckily, they got out before Covid hit. “I think we probably would have all gone insane if we’d been in lockdown together in there,” he jokes. 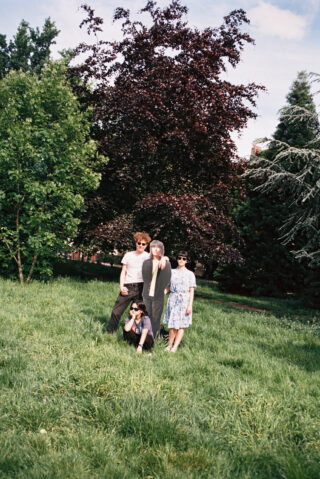 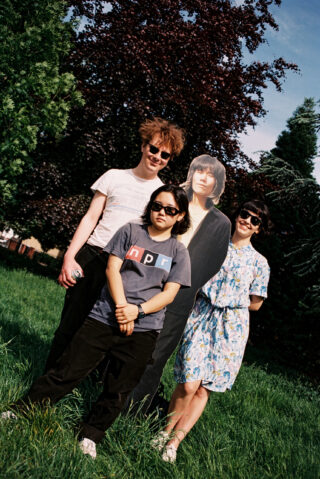 Although they’re no longer all under one roof, World Wide Pop involved a lot more IRL collaboration than the band were used to. Jam sessions and potluck dinners were an integral part of the process. “When we did that first record, some of us were already good friends, but some of us didn’t know each other very well,” says Harry. “It was us getting together to see if we had any chemistry, whereas World Wide Pop is the sound of friends making music together.”

The album is more immediate than Superorganism, with songs like ‘World Wide Pop’, ‘crushed.zip’, and especially lead single ‘Teenager’ falling into the black hole of hyperpop. The latter is a cacophony of high-speed drums, squelchy synths, and sound effects. Fans of the laid-back vibe of Superorganism were naturally taken aback by the muchness of it all. “We didn’t set out to make a maximalist record, it just kind of fell into place that way,” he admits sheepishly.

If nothing else, the absurd video for the song showed not everything had changed. Its neon-drenched, collage-style aesthetic has been built into Superorganism’s DNA from the beginning. “It’s the kind of shit that we grew up with and that we see on YouTube,” Orono explains. “It’s also what’s practical and what we’re capable of doing”. Despite Strange’s exit from the band, the clip may be the most mental thing they’ve ever put out, featuring actor and TikTok star Brian Jordan Alvarez dancing through Rainbow Road and riding a unicorn across the galaxy.

One look at World Wide Pop’s tracklist – with songs like ‘Black Hole Baby’, ‘Solar System’, and ‘Into The Sun’ – should tell you Superorganism are far more interested in what lies above Earth than on it. Almost every one of the album’s 13 songs features at least one reference to planets, or spacesuits, or satellites, or aliens.

“We didn’t conceptualise this record as a concept album,” Harry insists, “I think we’ve all just always been fascinated by the universe and our place in it.”

After struggling for a few moments to articulate what he means, he uses a meme to help explain. “It’s like that GIF of Eric Wareheim with all the explosions and he’s having his mind blown. That sense of being humbled by the universe around us and the interconnectivity of all of life and Earth, it starts to make you feel like you’re part of something that’s really big. The songs are us trying to grasp something that’s too big to comprehend and then crush it down into chunks that are more personal.”

Though fans of the abstract lyricism (or, as Orono puts it, “English class assignment vibes”) of the group’s debut will find plenty to latch onto, when writing World Wide Pop, Superorganism found themselves with a wealth of new experiences to draw from. “The starting point was from such a different place to the first album,” Harry reveals. “We’d gone through so many quite intense things. I think that inspires you to go into a more personal place.”

For her part, Orono was listening to a lot of Kacey Musgraves, whose music inspired her to write “more from the heart”. The lyrics on World Wide Pop retain her too-cool-for-school attitude but with a touch more vulnerability. “Giving up has never felt better / I’m logging out forever,” she sings on ‘It’s Raining’. Though there are occasional nods to existential ennui and even the apocalypse, they’re submerged in a sea of quirky samples and synths.

Ever since the release of ‘Something For Your M.I.N.D.’, it’s been hard to know just how seriously to take Superorganism. While they’ve outgrown the “hashtag random” lyricism of their debut – Orono’s words – their writing and production style is still unabashedly fantastical, to the point where you’d be forgiven for thinking it was put on. Surely no one can be that happy in 2022, on a planet imploding in on itself?

“I like to feel good,” Harry counters. “I like to party. I like to dance. Maybe that’s escapism, but we’re not the kind of people that get intimidated by challenges or by the weight of the world to the point that we can’t push through it. I think that once you have pushed through things, you start to realise you can get through whatever as long as you have the right spirit.”

Orono recalls a particular low point during the making of the album, when the others invited her over to their friend’s house to jam out what would eventually become ‘Oh Come On’. “I was so mega depressed that day,” she says matter-of-factly. “I locked myself in my room and binged RuPaul’s Drag Race. I was just eating Chipotle, crying, being miserable. But I ended up going, and you know what? I felt better.”

She pauses. “I think we’re all on the edge of falling apart and having a breakdown. We’re all trying to keep our own shit together. I just try to be myself as much as I can, because if I’m not being myself, I think it drives me even more insane.”