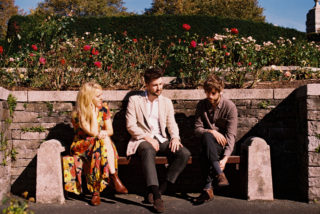 "There was one afternoon when something came out like a Marilyn Manson song, and we got terrified and took a two-hour break"

In 19th century French opera, theatre owners would often hire a claque – a body of professional applauders – to attend shows and to stand as one at the climax; a reliable ovation-generating machine that one suspects may not have entirely disappeared from the highest echelons of elitist artistic institutions. When Dublin trio The Claque finally make their live debut at an undisclosed location in their hometown at the end of April, the buzz generated by their debut single alone will negate the need for such measures.

‘Hush’, released on Any Other City Records in March, is an instant statement of intent. Guitarists Alan Duggan and Paddy Ormond duel scabrous noise-rock-indebted parts over a harsh, metronomic rhythm; a sterling take on a well-established musical tradition. What elevates the single into the standout category, however, is the juxtaposition of such a sound with the sparkling, honey-glazed vocals of Kate Brady, creating an aural dissonance that is instantly addictive.

“Singing to such noisy or gritty music, it’s just something that I wouldn’t usually have done in the past,” Brady explains. “I would have listened to that music and enjoyed it, but when we starting jamming along together it opened up a path to use my voice in a different way. It worked really well.”

The collision of hard and soft came as second nature for The Claque. Duggan, who as a founding member of Girl Band is no stranger to the world of noise rock, acknowledges that the trio were always going to sound the way they do. “It’s nice that you don’t hear it that much,” he admits, “it gives you scope on what it could eventually be. I just naturally play like that, and that’s just how [Kate] sings.”

“I feel like I probably would have sounded sweeter on other projects – I’m trying to get some grit going!” jokes Brady. “But that’s how it is – the three of us come with so many overlaps in the music that we enjoy and enjoy making, but also we are different. I write melodic grooves and have this jazzy, sweet style of singing. It’s kind of an interesting fusion, but it definitely wasn’t something we thought about too much. That’s just what all three of us brought to the table.”

The three have been friends for ten years, dating back to their school days. “We were just hanging around town when we really should have been in college, just hanging out and going to shows, weaving around Dublin, having the same interests,” Brady reminisces. The Claque only came into its current form in 2017, though, when their mutual timings aligned. Whilst this is the first major musical project for Brady, Ormond has previously been a member of Postcard Versions and Jetsetter, whilst Duggan’s Girl Band, who he confirms are still active, have been the subject of major international acclaim.

The band’s songs tend to emerge from jam sessions, with Duggan and Ormond playing over a drum machine and Brady singing phonetic melodies that are later refined into lyrics. “It’s still very early, to be honest,” Ormond is quick to point out. “It’s exciting to be still trying to figure it all out. The graveyard of our first songs is pretty guarded. There was one afternoon when something came out like a Marilyn Manson song, and we got terrified and took a two-hour break. I think it’s a blessing that I can’t remember what it was now.”

The band talk enthusiastically about the buzz when they know a song is coming together. ‘Hush’ is a song that first formed a year ago, from its origins as a mere chord progression in Duggan’s mind to a track that they would ultimately work over for six or seven months, indicating an impressively formidable meticulousness to their finished product that may stand them in good stead. “We were always happy for that to be our first track, the track that we introduce ourselves with,” says Ormond, betraying a justifiable pride in the song.

They are coy about how representative they expect the song to be of their eventual sound, although at this early stage it may be reasonable to say that even they can’t predict where time will take them. Their live line-up will mirror their recording techniques in as much as it will make use of both live and programmed drumming, with a bassist filling in for the recorded parts that are shared between Dugan and Ormond, but with their debut gig still a number of weeks away at the time of this conversation, there is an exciting sense of the unknown still to their trajectory. 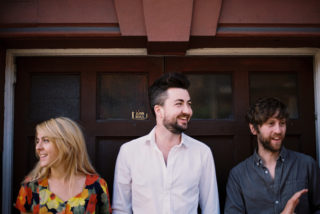 The Claque are just one of a number of highly coveted bands to emerge from Ireland in recent times. “It’s great to see that other people are doing well – that’s brilliant, of course,” says Duggan, “but I don’t think it really has anything to do with us. And that’s not in a distancing or disrespectful way, I just think a lot of the bands are very different.”

It’s an understandable point of view for a band that have yet to play their first show, but they are eager to point out that there is a closeness among their peers: “There is a community element to it,” Duggan adds. “Fontaines D.C. practise in the studio next door to ours. Dublin’s a small town and Ireland’s a small country, there’s only a handful of places to play.” Ormond has praise for Irish Arts Council funded projects like First Music Contact that offer support to emerging artists. “Our friends have a completely independent band with no label or anything and the government supported them to go on tour. Bands are eager to play outside of the country now.”

Ormond says that he can see how the band share some common ground with artists like Stereolab, Portishead and Broadcast. “I guess we’d like to be in that world,” he admits. “They have elements that we like, but it’s not necessarily about trying to emulate them at all.” Brady refers to jazz and R&B as sources of inspiration for her vocal style, saying that she finds her natural register to be more naturally in line with those musical histories. She points to Lesley Feist as another artist who has been able to straddle the genre gap whilst still drawing on such traditions.

“At the moment, we have these tracks and we just want to play live and try stuff out,” says Duggan. “It’s going to be fun spending the foreseeable future playing gigs, seeing how these tracks take shape.” An album, they says, is obviously a long way off.

But while they may be still be in their infant stage, The Claque already have the self-belief to match the achievement of their debut single. Those professional applauders are going to have to find another, more needing group of artists to work for.