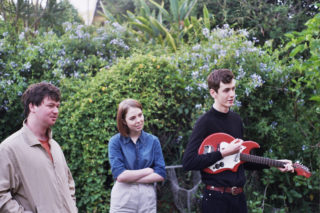 From the perspective of pop music, at least, the phrase ‘youth culture’ has become almost meaningless these days. Reduced to a parade of empty clichés, most music aimed at teenagers either revolves around ideas of angry rebellion or the feelings that come from that first, heart-rending love, packaged like a Polaroid. These narratives can only ever tell half of the story. While it’s a given that such topics are a big part of a typical teenage experience, for most people they just punctuate their formative years. For me, it was also a period that included extended phases of weird social awkwardness, euphoria, heartache and the general anxiety that comes from not quite knowing where you fit in.

The reason why The Goon Sax do such a good job of capturing this balance between self-doubt and wide-eyed excitement is mainly because they are actual teenagers. Forming in 2013 when all the members were still in high school, I’m immediately struck at just how young they are. “We haven’t done enough to be comfortable,” answers drummer Riley Jones meekly when I ask the band if they’d done many interviews. For several seconds the group anxiously glances at each other, before singer Louis Forster finally admits the true reasons for their hesitation. “We’ve done some bad ones in the past,” he mutters sheepishly, “we’ve gotten nervous and said some silly things.”

A trio made up of Jones, Forster and their friend James Harrison, The Goon Sax formed after Harrison and Forster decided that they wanted to take music a bit more seriously than most of their peers. “Our first bands were more social than hard-working or serious musically speaking,” explains Forster. “It was more like we’d practice for an hour and then just hangout for the rest of the day.” Workshopping songs in their bedrooms, the duo finally became a proper band after they added school mate Jones on drums. “I started playing drums and a month later, somehow I ended up in this band,” she tells me with a shrug. One month after that, they were playing their first show.

When it comes to influences, The Goon Sax aren’t exactly your typical 17-18 year olds. They make pop music, but it’s pop music that has more in common with Orange Juice, XTC and the mid-80s Postcard Records roster than, say, the pop made by Drake or Katy Perry. Their list of influences mostly come from a time before anyone in the band was born, with the band excitedly reeling off acts like the Pastels, Talking Heads, Galaxie 500, Bob Dylan and Arthur Russell when I ask them about their favourite bands.

However, it’s fellow Brisbane natives The Go-Betweens that the band get compared to the most. Louis’s father is Go-Betweens founder and respected music journalist Robert Forster, which invites many commentators to immediately draw connections between the two bands; even if it’s pretty lazy. Superficially, there are some similarities; both acts certainly make music that is bookish, literate and deeply self-aware, but while Forster senior’s band goes for lush, orchestral pop, his son’s band is extremely lo-fi in comparison. In fact, you’d be better off thinking of the Television Personalities, The Feelies or The Vaselines if you wanted an ’80s indie band as a point of reference. 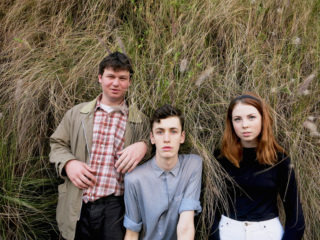 For the members of The Goon Sax, their sound stems more from their abilities as musicians as it does from any master plan to ape the styles of the past. “Originally, I never intended the music to be so ‘soft’,” explains Forster, who is quick to point out that the trio started out wanting to be a punk band. “Before Riley joined we didn’t have a drummer and we were practicing on nylon string guitars, so we kind of ended up sounding this way.”

“Not having much drumming experience also helped,” adds Jones. “We ended up sounding like a lot of bands I like almost by accident. Even though I wasn’t able to do very complicated fills or anything like that, I think the simple patterns I could play really suited the music.”

As well as necessity, the band’s home city of Brisbane has also played a big role in shaping their sound. “It’s a really interesting place!” exclaims Jones. “It’s quite a small city and not very culturally diverse, so it’s kind of surprising that there is so much going on.”

“There are some very good bands in Brisbane,” adds Forster. “Blank Realm are a really great band and we really like Per Purpose and Scraps – there’s a lot of really good people doing stuff here”.

Thanks to its remarkably diverse indie scene, Brisbane has been a great place for The Goon Sax to hone their chops as a live band. The ability to jump on any bill has helped get the band get a leg up, while the ad-hoc nature of the city’s indie scene has created an extremely accepting audience, willing to indulge acts with more art-house tendencies. However, like a lot of Aussie acts, it was the house party circuit where The Goon Sax really got their start.

“In a lot of ways, house parties are some of the worst places to play,” explains Forster when I ask the trio about their first few shows. “I’m kind of glad we’ve stopped doing them – something always goes wrong and no one’s ever around to help you.”

For Harrison, though, these shows were a good way to get used to playing live. “It’s a lot more relaxed than playing at a venue,” he muses. “You don’t feel as pressured.” Forster remains unconvinced. “We’ve spent a lot time standing around while the PA has blown out.”

The Goon Sax are full of these wonderful contradictions. One minute you’re talking to a clear-headed, confident group who are comfortable with the music they make, the next you seem to be chatting to three kids who can’t quite believe what’s happening to them. In the case of the band’s lyrics, Forster, Harrison and Jones are remarkably candid about their feelings, thoughts and desires. Songs like ‘Sweaty Hands’ speaks of the point in a relationship where you’re finally seen at your worst, while ‘Telephone’ highlights the anguish of realising that some crushes can never be won over.

When we begin to delve into the reasons behind this emotionally smart approach to song writing, the band seem genuinely nonplussed by the attention their lyrics are getting. “I think the songs are quite confessional,” says Harrison, carefully. “They might not be completely stream of consciousness, but they are honest. I’m not sure what it is – maybe they’re a little bit sad?”

Forster couldn’t imagine doing it any different. “I think these subjects are the ones that come out the most naturally,” he says. “Most of our songs aren’t really about one thing or another, but are more about a few things that could be on our minds at a certain point in time. I guess that’s why they can sometimes feel a bit stream-of-consciousness; it’s us trying to tackle a few things at the same time.”

Being in a band can feel like a rollercoaster, especially when you’re just starting to find traction. All in their late teens, the members of The Goon Sax are going through a busy period of their lives, and I’m interested to find out how the members are juggling all the things that are going on. “I’m at school, James is at Uni and Riley is looking for a job,” says Forster, “but we’d definitely like to do the band as a full time thing if we can.”

“Last year when the band was kicking off, I was in the middle of finals and stuff like that,” says Harrison. “It’s definitely a distraction, but it’s a good distraction.”

They say that they aren’t looking too far into the future. They’re in the middle of their first Australian tour at the moment and enjoying playing outside of their home town for the first time. “At the moment, every time we play I’m left wishing we can do it all again,” says Forster grinning. “You start to feel like you could be on a roll.”

They’ve pencilled in their first European tour for September. “It’s exciting that people have heard of us from so far away,” smiles Jones. “It’s not confirmed or anything but I really hope it can happen.” With that, the band falls silent as Forster looks conspiratorially off screen. “I’m working on my parents at the moment – actually I hope they can’t hear this, they’re in the next room.”