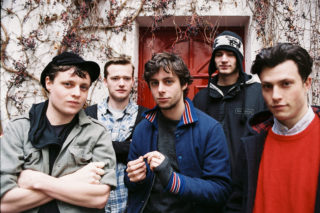 Know that ‘polishing a turd’ phrase? It’s meant for this. In fact, it’s meant for all returning artists everywhere. Because immaculate timing, a Coldplay-wide promo budget or mass-hype matter little where musical comebacks are concerned. Just ask Britney or that ginger man who used to hang out with Slash from Velvet Revolver.

You only get one chance to make a second impression, which is why The Maccabees scrapped half of album number two as soon as they’d written it.

“When we finished touring the last album we thought we’d written half of this one,” explains singer Orlando Weeks “but then we started demo-ing and it sounded so shoddy. So we went back to the drawing board and started again. It’s taken a while but it’s definitely been time well spent.”

Shoddy as is samey and rushed, we presume?

Orlando: “I think it was a mix. It didn’t feel like it had moved on enough and it felt like, from what I was writing, that I was so tired of the stuff we’d been playing and touring that I wanted to do something so far removed that as soon as I got over the novelty of not writing for The Maccabees I stood back from it and was like, ‘actually, that’s shit’. And then I relaxed back into the fact that I’m in a band with these other boys and I know what we’re capable of doing. And I think everyone did the same thing – we all went away and realised that when we’re writing we need to be writing for each other’s strengths.”

Maccabees’ strengths, for those that missed previous album ‘Colour It In’, include writing beautiful, swooning melodies one minute (‘Toothpaste Kisses’) and playful, spiky indie the next (‘X-Ray’). Whether brashly leaping from or vulnerably sneaking out of Orlando’s chest, each track has always been lyrically honest and highly emotional, even when seemingly about swimming pools (‘Lachmere’). And now the band are holed up in the most romantic heart-friendly city in the world, made for writers of songs called ‘First Love’. Truth be known, The Maccabees find themselves in Paris partly to escape English disruptions, partly because some arm-twisting meant that their label allowed it.

“We did the first three weeks in Liverpool and Lincolnshire,” explains Orlando “and then we came out here just to finish it all off. We definitely didn’t want to do it in London, like you said, there’s just too many distractions of all sorts, and also we thought that if we could persuade the record company to fork out for us to come here, amazing. I’ve been listening to Echo & The Bunnymen a bit and I think Paris has a good heritage for producing good records and it’s a beautiful city, and we all wanted to come.”

It’s bassist Rupert (the tallest, almost shy Maccabee) that seems to be really benefiting from the band’s Eurostar trip. His parts on the new album are all but finished, leaving time to broaden his knowledge and admiration for a new, unsuspecting love – “Rupert’s become obsessed with AC/DC,” says Orlando, confirming guitarist Felix’s claim in a recent Myspace blog. “Sometimes I wonder what interests him, but at the moment it’s AC/DC. He’ll be walking around Pere Lachaise listening to AC/DC. At the grave of Chopin, listening to AC/DC”.

For the rest of the band (bar Rob who has handed over his sticks to substitute drummer Sam for the recording process) swatting up on ‘Back In Black’ in world famous cemeteries remains far from their agendas. Felix, Orlando and second guitarist Hugo are still prisoners to the studio, slogging it out with producer Marcus Dravs (Coldplay, Bjork, Arcade Fire) before a Christmas break and a fresh start around the time your read this – Orlando: “We’ve been writing and working on it for almost a year and a half so I think it would be good to start the new year afresh, and not be thinking ‘oh, we’ve still got to do that guitar and that vocal’”. 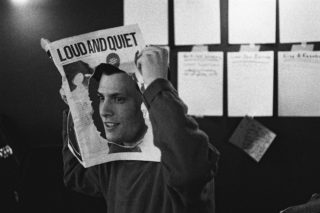 Inside their focussed hub they remain a close family of old friends (and two brothers in Hugo and Felix) and, this being The Maccabees, are as welcoming as any band could be. They point us to the new song sheets on the wall, pose politely for photos, chat freely and doctor the current issue of Loud And Quiet to feature Orlando’s face on the cover.

We’ve of course met before, when the band were actually on page one of L&Q in April 2007, and reassuringly the pressure of album 2 shows no sign of dampening their spirits or blunting their exquisite manners. Except, we’re told, there isn’t any pressure.

“There’s not really,” insists a relaxed Orlando. “More than anything, from my point of view, I just want it to be a step up, and I definitely think it is. I’m so proud of the first record but I never listen to it all the way though, because it would feel a bit weird to, but with this one I’d like to think that in six months I’ll sit down and enjoy listening to it. I’ve approached it in a fairly selfish way but that’s just how it had to be done.”

So all of that ‘swooning melodies and spiky indie’ is no longer for The Maccabees?

“As far as I’m concerned, the things I still feel capable of writing about, or feel like I’m allowed to write about because I know enough about, are still the same,” says Orlando “being in love, or not being in love, and family, and those kind of things. I feel like I can justify writing about those. In terms of the feeling of this new record, it’s more about atmosphere. All of the songs compliment each other, which doesn’t mean that they sound the same at all. But I’ll use the word ‘feel’ because ‘vibe’ is such a horrible term.”

Phew. The Maccabees will still be swinging from our heartstrings this year then. That’s good to know. It’s probably why most are so eager to hear another record, after all. It’s why this band’s absence hasn’t seen their fans grow impatient, bored and walk away. It’s why The Maccabees are most likely to ‘do a Mystery Jets’ this year.

“I’ve kind of felt that [people want us back] quite a lot,” says a pleased Orlando. “When we’ve been out and about, contemporises have seemed really excited, as we are of them. I was desperate for a new Mystery Jets record and that was amazing. I can’t wait for Jamie’s [T] new record, it’s exciting. I can’t wait for Jack’s [Penate] next record, that’s going to be amazing. So I’m excited to hear everyone else’s.” 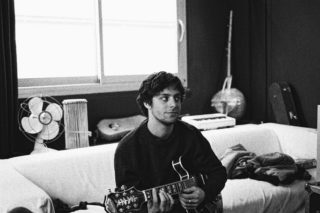 When comparing recording sessions for ‘Colour It In’ to those of this new, as-yet-untitled album, the band talk of how studio time that came in “dribs and drabs” left the debut feeling like “it was a record of songs, rather than of a cohesive album”. This time around they’re intent on creating a body of work that feels more like a unit of sound. And they’ve noticeably grown as songwriters also. Grown but not ‘matured’.

“What I think ‘Toothpaste Kisses’ had that a lot of the other stuff didn’t was a much more grown up understanding of melody,” begin Orlando “and how to use harmonies, and less… hang on, this is all sounding stupid. This album’s just got a lot of what the first record had in the fact that it’s spirited, but it’s a lot more… I think everyone’s worked out how to make melody work… argh, I’m not really sure how to explain this at all. I just think it sounds a lot better. It’s not more mature because that’s more of a conscious thing. We wrote a lot of that old stuff when we’d not been playing our instruments for a very long time, and we’ve been playing for a lot longer now. And because I’m playing a lot more guitar on this record the other boys have got a lot more freedom.

It seems like The Maccabees haven’t changed a bit and are yet a completely different band altogether. Perhaps they’ve changed as musicians rather than people. Orlando certainly seems like the exact same person we joked with on a Brixton rooftop back in April ’07, only more determine to prove himself. He says there’s no pressure, but he’s definitely ready for the fight. And second albums are a fight, even for a band like The Maccabees, with hoards of fans still waiting to be consoled and supported with emotional words and comforting guitars.

Now all this band need to do is prove that there’s no need to ‘shine shit’ if what you deliver is already made of the good stuff.