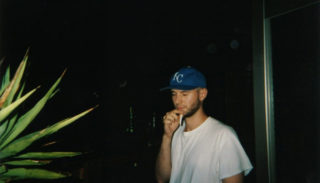 There’s a moment ten minutes new Brian Leeds’ album, ‘Make Me Know You Sweet’ (under the name Pendant – photo above), that I keep going back to. All the odd alien textures that have been surging and gradually building melt away to leave one decaying tone. This tone fills the mix, enveloping you in an eerie stillness. The metallic whooshes and watery rushes that have coloured the track dissipate. An electronic kick is the only anchor, and even that is loose and scattered.

The album is full of little moments like this, where Leeds makes subtle shifts feel gigantic, and where incrementally morphing textures feel weighty and passionate. Words don’t quite capture these moments outside of some hammy descriptors. That amorphous palliative quality has long been part of ambient music. It’s why so many have trouble writing about it, opting for hyper-academic musings on its aestheticism, existentialism and the sublime.

It’s also the reason ambient albums can feel so personal. Leeds works from Brian Eno’s original mission statement to “induce calm and a space to think”, but he does so while forging a world all his own, a world built on unusual textures to sink into. His repetitive loops truly feel infinite, allowing them to influence your mood without even thinking about it. When I’ve been struggling with productivity, I go to Pendant, and an air of calm washes over. Its power to dull sensory distractions makes a good case for the music-as-therapy argument.

We talk about ambient as background music; it’s undoubtedly created with atmosphere in mind above all else. But it’s often background music for one. Its traditional usage as a tool for productivity lends it to solitary headphone listening, while the intangible yet hyper-specific emotions and landscapes it can conjure will be unique to each person. Sure, ambient artists can tour the world and connect with crowds of hundreds, but unlike other forms of electronic music reliant on rhythm and direct structure, it’s not clear that we’re feeling the same thing at the same time. We’re not bobbing our head to the same groove. Instead, we’re inside our own heads, more than with immediate forms of music.

All of this pre-amble is to say that ambient music is bloody great, and a lot more emotional than it’s given credit for. This will be stating the obvious for many, but it’s something that needs to be stated plainly.

Ambient is in a renaissance right now. Artists like Brian Leeds, William Basinski and Ryan Sakamoto have been exploring the form in their own beautiful, distinct ways, while others across dance and experimental like Bibio, Gaussian Curve and Grouper are turning to the genre for inspiration, mining new ground in their own corners. The genre is in the best position it’s been in years, but it’s also at an odd crossroads, threatened by corporate influence at one extreme, and elitist fans at the other.

Please do stop the Muzak

Many ambient artists are skilled and acclaimed, but they’re operating in a niche that’s never going to sell out Wembley. This isn’t anything new; many of them are undoubtedly writing for a different purpose than fame. The more worrying aspect of this is that the genre is frequently commodified, which adds to the perception that ambient is not just background music, but valueless music.

Last year, Spotify was accused of creating ‘fake’ artists on some of its most popular chillout playlists with names like ‘Deep Sleep’ and ‘Peaceful Piano’ – the kind of music a Brian Leeds or Nils Frahm excel at. The artists in these playlists were gaining tens of millions of streams, but most didn’t have any sort of online presence, or any other songs in their back catalogue.

In the New York Times and Vulture, the company was accused of controlling the rights to these songs. The reality was more complicated. Several composers had been commissioned to write for these playlists specifically, with upfront payment and potentially reduced royalty costs. The deal suited all parties, and listeners got what they wanted. So what’s wrong with that?

The main issue with streaming platforms curating their own music this way is that it allows them to guide our ears away from the independent labels and artists progressing the genre. It’s no surprise that the first Spotify-curated track appeared within a style frequently brushed off as Muzak. In the early days of Eno, when ambient was literally used to fill public space with an artful take on elevator music, that misconception made sense. But the genre has expanded since then. The intent of ambient depends of the individual making the music.

What Spotify are saying, whether they mean it or not, is that this is music is disposable – stripped of its individuality on a faceless playlist, its highest potential for emotional involvement removed.

Like other forms of experimental music, ambient suffers from its inaccessibility to newcomers. But this is not an issue of having to ‘learn’ how to listen to the music. The struggle comes from having to bypass fanbases that too frequently fall into traps of elitism and superiority. Forums, comment sections and clubs are full of white dudes ready to explain exactly how you should listen to ambient, exactly what its artistic purpose is, and exactly why you don’t get it. Part of that elitism comes from pure passion; when you’ve existed long enough in a niche genre that doesn’t get as much attention as you’d wanted to, a sense of ownership sets in. Newbies simply weren’t there through the harder times, to see what makes the genre worth following.

It also comes from the link with academia; countless papers have been written on the experimental form, and many reviews focus on the intellectual qualities of the genre. This is not a bad thing, but it’s when we begin to view music discussion as something to win at, we dismiss individualism, which is part of what makes ambient so powerful. I say this because I love the genre. The pretension is at odds with what is a deeply emotional style.

For music critic Oliver J of YouTube channel Deep Cuts, ambient has also been a deeply personal genre to explore, though his experience with elitism has not been as prominent.

“With every genre, there is bound to be a crop of elitist individuals who make it their mission to make others feel stupid or misinformed, and that’s a shame,” Oliver says. “But generally I have found communities online for these types of music particularly welcoming, open and helpful. Many of the most interesting left-field music discoveries I’ve made over the years has been a result of conversing with these people in these kinds of communities.

“I can’t stand elitism when I see it in action though – it’s not big or clever to talk down to someone for not having the same level of knowledge as you, so pipe down!”

For Oliver, the personal power of ambient outweighs any of that: “The subjectivity and variance of experiences with ambient music is one of the things that fascinates me so much. The experience I have with William Basinski’s ‘The Disintegration Loops’ might be entirely different to someone else’s. That fact alone makes the world of ambient music a rich one, rife for debate and discussion.”

The Music of Lived Moments

In an excellent historical ambient deep-dive for FACT, Lawrence English wrestles with the terminology of the genre to question its future:

“Ambient had, like so many musical terms, become profoundly diffuse – a product of sloppy application and overuse,” writes English. “There were moments where it could mean just about any music that might be used as an audio blanket, something constant and lulling, within which you might be gently consumed. As the ’90s unfolded, ambient’s usage in tandem with chill-out and an exploding list of electronic music genres further eroded the promise of its determinate qualities.”

At the end of his detailed, measured piece, English throws out a thought that deeply connects, for me: “Ambient is a music of lived moments.”

Ambient, even as it evolves, has remained attached to our lives through how and where we use it. For me, it’s an inspiration to heighten productivity, for Ryan Bassil of Noisey, it’s a way to calm crippling anxiety and debilitating panic attacks. The best way to celebrate the genre would be to highlight some of those moments that have stuck with me as of late, to demonstrate just how impactful this form can be, even when floating in the background. Here are a few artists and tracks changing the genre.

Gaussian Curve’s first album, ‘Broken Clouds’, is unique among ambient albums. Not only did it bring together three legends in their own right – Gigi Masin, Jonny Nash and Marco Sterk – but it was also written and recorded on the fly, in just three days, despite how meticulous it sounds. A chance weekend together produced a dreamy collection that recalls easy summer memories. ‘Impossible Island’ is the standout, the warm, jazzy guitars and bright keys flowing effortlessly over each other for an unhurried seven minutes of bliss.

The dance producer had tinkered with gentle ambient textures before, but ‘Phantom Brickworks’ was his bold dive into the form. On ‘Branch Line’, low-fi piano and rainfall feel like its conjuring ghosts as it works its magic over sixteen minutes. Traditional in style for ambient, the track represents the way a piece can feel massively important when the time you’ve spent with it tangles the music with memories. These soft sounds have become embedded with my own emotions, tinting them differently with each listen.

‘Async’ disproves the argument that ambient always lurks in the background. There are plenty of subtle moments, but Sakamoto’s fragmented, disturbing palette is nothing short of thrilling when taken in its entirety. ‘Zure’’s glitchy textures and scratching white noise are fit for a horror film.

Like ‘Async’, there’s no way Visible Cloaks could be left hanging in the background. Their melodies and textures are intricate and blindingly bright. ‘Terrazo’ is a stunning fusion of jazz, Japanese music and digital tinkering. It feels like being sucked through a phone screen from the year 2300 and finding yourself in a gorgeous new world. It shows that ambient can be as energising as it is calming.

Neil McDonald’s ‘Parabolas of Neon’ EP with Edinburgh’s Firecracker records soundtracks a night in the city’s club scene, and the lonely bus journey home afterwards. I know, because it’s soundtracked my own ventures to the Scottish capital. ‘Tocpe 28’ is the blurry exit, blood still whirring from the last song. It’s the first intake of cold city air as you climb the steps from a stuffy basement club, and the quiet walk to your home. McDonald captures the euphoria, cool down and melancholy in just a few swells of synths and keys.