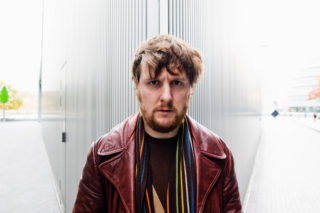 So goes one of Tim Key’s eleven hundred poems, recited in his docile, sleepy manner to make Mark Davenport’s name as much the punch line as the fact that he, Rob Pacey and Andy Warr are in actual fact peacocks. The poem is called ‘Bending Over’ and it’s track four on Key’s vanity album, ‘Tim Key with a String Quartet on a Boat’, released earlier this month via Angular Recordings.

“I just love names like Mark Davenport,” says the comic in a stark latte bar near Boris Johnson’s City Hall. “Obviously no thought goes into them – I don’t sit for twenty minutes and think up Andy Warr. When it works best is when people find them funny without them being at all funny, like if someone turns up called Dan Cook, it’s like, ‘wow, that’s quite funny,’ even though it’s not.”

“I need to be back on the tube just before half eleven,” he says. “I’ve got Claudia Winkleman’s radio show to do, and I wouldn’t want to keep Winkleman waiting.”

What exactly does a Claudia Winkleman radio show entail?

“I dunno,” shrugs Tim, “just a chat. I might ask her if she’s a pervert. I’ll say, ‘I’m going to turn that question around on you Claudia and ask are you a pervert for asking me here today? And where have my clothes gone?’” Tim Key (it’s hard not to include his surname when you’ve been listening to his tales and poems for a few weeks) then lets out a short sharp burst of laughter, which he does a lot. 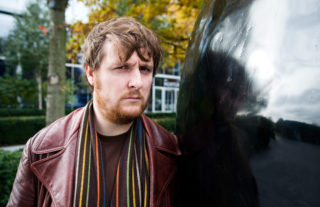 On stage he cuts the figure of a forlorn, sedated scruff who struggles to muster the energy it takes to complete any given sentence; off stage he’s equally as considered but far more likely to find his jokes and those of others instantly hysterical. Both Tim Keys enjoy the surreal, as Claudia Winkleman will soon find out, and as I did when seeing his work-in-progress stand-up show a week ago.

“Oh, you came to one of those, did you?” he happily exclaims. “Which one was it?”

The one where Tim Minchin turned up and you finished by singing a song in Russian (a language that Tim studied at university).

It was. But comedy – in an age where men as unfunny as Russell Howard, as old fashioned as Michael McIntyre and as un-likable as Peter Key can sell out arena venues – is also something of a serious business. And Tim Key, although unlikely to ever admit it, is close to tipping point. He’s the guy who sits to the left of Alan Partridge on the recent Mid Morning Matters YouTube shorts; the man who was funnier than Charlie Brooker on Newswipe; the bloke who is a glass of milk on a TV ad you’ve probably seen but not fully noticed. Winkleman wants to talk to him; so do we; and Angular Records have released his record, which is why we’re officially here, although it turns out that Tim is not too au fait with the current musical climate. “I don’t know any of these bands,” he says, squinting at the front cover of last month’s Loud And Quiet. “Are they bands?”

“Yes,” I say. “Grinderman are Nick Cave’s band, and you’ve heard of him, right?”

His album was recorded, as the title suggests, on a boat, with a string quartet, and is made up of thirty poems that are more often than not shorter than the inter-track back-n-forth between Tim and his friend Lord (comedian Tom Basden). It took two days to make, although has been pieced together to sound like one continual take, in keeping with Tim’s slacker, ‘that’ll do’, heightened air and his train of thought poems.

“The album is a little bit more straight [than my shows],” he continues. “It’s kinda scripted as well so there’s a different atmosphere. It’s still not a character but it is a little bit of a persona. But the stuff you would have seen the other night; that was very relaxed. It’ll be interesting to see, actually, when I make that show into a proper hour to take to Edinburgh next year, how it might change. I kinda hope it doesn’t because I like it so relaxed and feeling so open. But, yeah, the stuff on Screenwipe and Newswipe is a little bit more disarming I suppose, but I think that’s because I feel there’s a job of work to be done. I’m there for Charlie Brooker to hand over to me and for me to do a poem that they’ve commissioned about a particular bit of news. It’s not as if I can stop halfway through and start talking to the cameraman. In fact, they don’t like that at all,” he laughs. 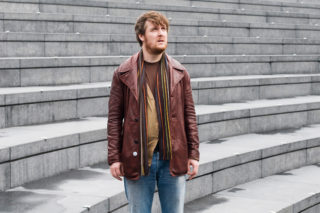 For those YouTube viewers out there, I’d suggest searching for Tim’s Newswipe poem ‘Banker’. Filmed in a dank dungeon it features him endearingly sad-eyed as he calmly lays into “those dreadful bastards in banks who screwed the country over”. ‘The Bad Gentleman’ is good too, about a failed terrorist attack that happened around the show’s original airing. The bad gentleman put some powder in his knickers and shuffled through security, it begins. And Tim, quite evidently, likes to self-commission darkly themed prose too. On ‘Tim Key on a Boat with a String Quartet’ he gives us ‘Tiger’ (a sleazy tale of a golfing sex pest), ‘Eggs’ (about a decrepit old crone tormenting her son) and ‘Waterloo’, which is the album’s closing opus that ends in death and embarrassment. But really, amongst the random horrors of the record, the real recurring theme seems to be the fairer sex.

“There’s lots of recurring themes on the record, actually,” says Tim. “Well, there’s three! Ladies do come up a lot. There’s a lot of sex, a lot of death and…err…love! Sometimes there’s some sex happening where there’s love; sometimes people are killing themselves because of love; and sometimes people get carried away during sex and die…Oh, and divs!” he remembers, “there are a lot of divs and plonkers, just getting up to mischief.”

Last year, Tim won the Edinburgh Comedy Award, which is something he’s extremely modest about. “You’ve got to be quite philosophical about it and realise that it’s just the opinion of those judges watching the shows,” he says. “What more important is that you’ve had a good couple of weeks in Edinburgh and the other people who’ve come to the shows have enjoyed it.”

In 2011 he’ll return to the festival with a show forged from his recent live workshops, but not before he releases his debut album and performs in a Tom Basden play between now and Christmas. And certainly not before he gets on the tube and calls Claudia Winkleman a pervert.