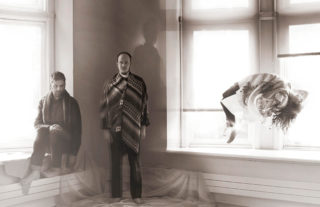 An awkward interview with Taylor Kirk and his band

Ever had that dream where you show up for school late, naked, and without your homework? And you realise that, on top of all that, everyone hates you. Everyone. Feel queasy yet? Well, I’ve just been left alone in a room with three people, only one of whom I’ve been properly introduced to – Taylor Kirk, founding member, and now one third of, Timber Timbre.

There is a long, vaguely nauseous silence while I retrieve my Dictaphone. The band all look at me. I look at the plate of half-eaten fruit and pastries on their side of the room and briefly consider burying my face in it and crying as a sort of impromptu icebreaker. Instead I ask sheepishly to be re-introduced and am met with looks of bewildered semi-annoyance. Naked… no homework… yeah, there you go. It’s a queasiness bonanza in here.

The other two thirds of Timber Timbre are Mika Posen and Simon Trottier, both relatively recent additions to the lineup. “This is the first time we’ve ever done something together, as a group,” explains Kirk, referring to the new album, ‘Creep On Creepin’ On’, “and it’s also the first time we’ve had resources behind the recording – time to use the studio, not just race through. So, yeah, we got space to try things and to bring other people out and stuff.”

How many more people are we talking?

“Well, outside of the group – which was already new, the three of us as a collaboration – we brought two other people in, Mathieu Charbonneau, a pianist who Simon is working with on another project, and Colin Stetson, who’s playing saxophone.”

And how did this trio collaboration come about? There’s a peculiar pause as Kirk looks at the other two, hoping they’ll contribute to the proceedings, although I gather that they don’t particularly feel like getting involved – it would seem that this is still ultimately Kirk’s project and these two are only slightly more comfortable with this conversation than I am. Perhaps we should all sit on spikes to make things a bit more relaxed. Eventually, Posen quietly answers, “I guess Taylor used to live in Toronto, I live in Toronto and it’s a small music scene so we just met, and he asked me to play on the last record. We met Simon on the inter-city music scene, I guess he was living in Montréal, and we started playing as a live band and it kind of evolved from there.”

So is there a difference between what they do as a live band and what we hear on the record?

“The live performance is a lot different from the recording,” says Trottier. “We’re still trying to play the songs the way they are on the record, but live it’s more like we’re trying to make layers of sounds, like the way we’re doing it on the record but… differently.” He looks around. “Does that make sense?” About as much sense as I seem to be making.

I tell them the new record, while maintaining the Timber Timbre standard for bleakness, seems to be a bit more plugged-in – a bit ‘rockier’ – with a significant amount of bright, doo-wop-ish piano tinkling thrown in. Is this shift in direction, from total gloom to a sort of grim strain of glee, a side effect of the collaboration? Kirk looks like I’m about to punch him.

“Like, it’s more upbeat?” he asks. I agree that’s a much better way of putting it. “Yeah, I guess…” he studies the floor for a moment, “A lot of the writing happened over the course of the last two years, which has been us touring, and a lot of exciting things have happened around the project and, yeah, it’s been fun. I’d just come out of a very hard personal time, and this was something more light, definitely there’s more exuberance and joy and humour in the music.”

I wouldn’t go that far, but at least I’m not crazy for finding a murky blues album strangely perky.

“Not a lot of people have mentioned that,” Kirk frowns. “Most people fail to notice that even the title itself is meant to be ironic; the music is dark, and we know that, but it’s not just dark.”

Well, the lyrics are certainly dark, the record is basically a series of twisted ghost stories – not always literally, but each song is deeply haunted. I think about ‘Dark Water’ – a deranged grin of a song, woozily waxing lyrical about sunshine while recounting strange midnight rituals involving burials and ponds of dead fish, and ask Kirk about his eerie, surreal style of storytelling.

“It’s a broken, fragmented, non-linear style of storytelling,” he says, “but I think I’m getting better at that – better writing, better lyrics. Mostly I’m just writing about my life,” he murmurs, and I am reminded of the obvious pain and peculiarity of his fractured tales. “And the way I try to disguise that is… stylistic.”

Here, there is a peculiar silence and it seems that’s as far as we’re going to go with that. Back to the exuberance: What were the exciting things Kirk eluded to earlier? He looks to his bandmates again, they look back at him, askance. Clearly they weren’t as excited about whatever it was. They’ve been playing all over the place in a variety of venues, ranging from dives with football games being broadcast during their set, to large, impersonal spaces – they share a preference for the more intimate venues, particularly ones without sports on telly. And what about recording; does Kirk not miss the simple tape recorder in a bedroom technique he used to profess such a penchant for? Trottier describes constantly tripping on cables and knocking mics over and not being able to find anything and the others agree that a nice, clean studio is the way forward. Kirk has an interesting take on it: “As much as I’d like to still make something that’s just for myself, which is how I’ve always approached writing and making recordings, it was impossible to do that this time around, having gone out into the world and having to live with the same eight songs for a year or two… It was impossible to make something that I didn’t know people were going to consume on some bigger level.”

What a distressing thought, no wonder this man views a bit of saxophone wonk as blindingly joyful. I suspect this is a deeply personal process for Kirk, who says he still does all of the writing by himself, Posen and Trottier’s contributions being the composition of a handful of haunting instrumentals that evolved out of the live sets. They were initially improvised pockets of music between songs, to help hold the otherwise (according to Kirk) somewhat disparate collection of tracks together. I ask if they have any plans to collaborate on the writing as well in future. The reaction is not unlike asking a newlywed couple when they plan to start churning out offspring. It’s either a stupid question, a sore subject, or they’ve just never discussed it in the years they’ve been on the road together. Kirk quietly tells the carpet that he still prefers to write alone. Well this isn’t awkward… At least we’re all as weirded out as each other now. There’s a nice, long, squirm-worthy pause. Have they got many more journalists to talk to? No, apparently I’m the last for the day. Well, that explains why they seem so shattered. Blank looks. Knackered – tired, yes? Nothing. I am fidgeting with my bag and dithering like an idiot, is someone coming to collect me or…? (I notice that the window is ajar and am briefly tempted.)

I’m a few blocks away before the queasiness subsides.